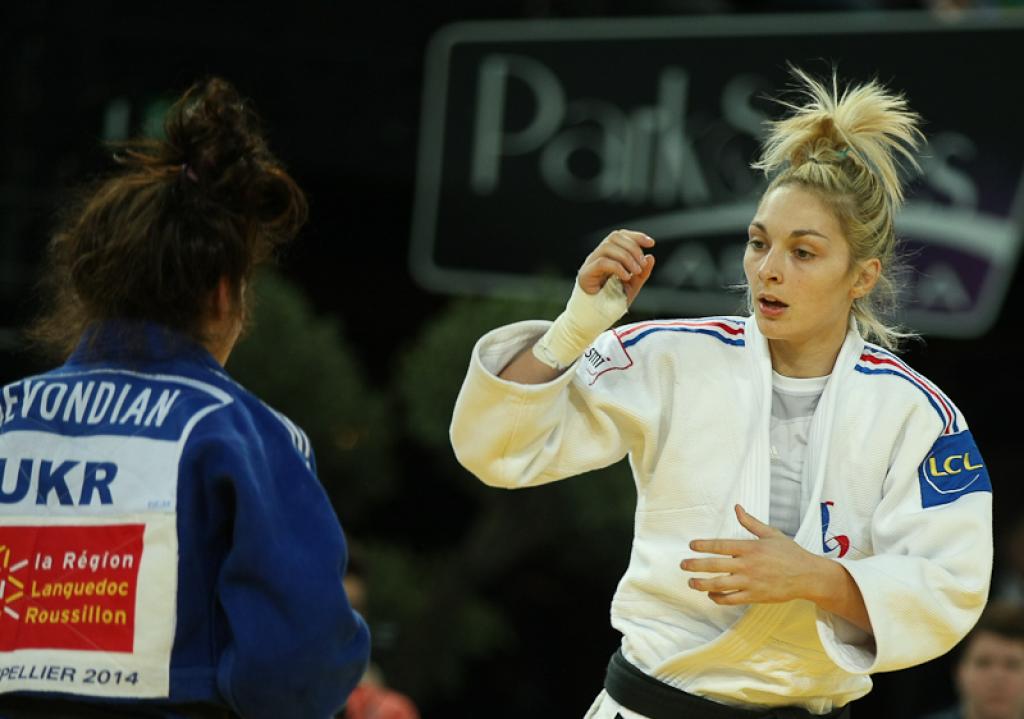 Most favorites advanced to the final stage as the European Judo Championships 2014 opened Thursday in Montpellier, France, with the women’s -48kg, -52kg and -57kg as well as the men’s -60kg and -66kg. In the biggest upset of the day, Olympic Champion Arsen Galstyan (RUS) lost in the quarter-final of the men’s -60kg.

His teammate and 2012 European Champion Beslan Mudranov easily cruised into the semi-finals where he will meet Orkhan Safarov (AZE). Mudranov looked determined to regain the title. Defending champion Amiran Papinashvili (GEO) had a slow start, but got into the semis. Here he has to face Ilgar Mushkiyev (AZE), who overcame Galstyan in the quarter-final. Galstyan suffered a foot injury in the match.

In the men’s -66kg, Mikhail Pulyaev (FRA) looked strong in his initial matches and is up against David Larose (FRA) in the semis. Larose overcame a painful hit to his right leg in his first match against Elio Verde (ITA). He seemed somewhat handicapped after that, but he has the home crowd on his side.

France has another medal hope in the race with Loic Korval, who fought his way to the semis where he will meet Sugoi Uriarte Marcos (ESP).

Defending champion Eva Csernoviczki (HUN) had not much trouble on her way to the semi-final in the women’s -48kg. Kristina Rumyantseva (RUS) will wait for her and showed convincing performances in the preliminaries. Young Amadnine Buchard (FRA) and Maryna Cherniak (UKR) are the other two semi-finalists.

World Champion and top favorite Majlinda Kelmendi (IJF) secured her spot in the semi-final in the -52kg with strong performances. Her next opponent, Mareen Kräh (GER), will be tougher to beat. The German World bronze medalist easily advanced to the semis as well. Defending European Champion Natalia Kuziutina will face teammate Yulia Ryzhova in the all-Russian second semi-final.

The semi-final in the women’s -57kg features top all top contenders. Top seed Miryam Roper (GER) made short work of her opponents in the preliminaries and has to fight Sabrina Filzmoser (AUT) next. The 2013 European silver medalist looked very confident as well. Last year, the Austrian broke her arm in the final against Automne Pavia (FRA). Pavia was not challenged much in her first two rounds. The defending champion will face Corina Oana Caprioriu (ROU) in her semi-final.