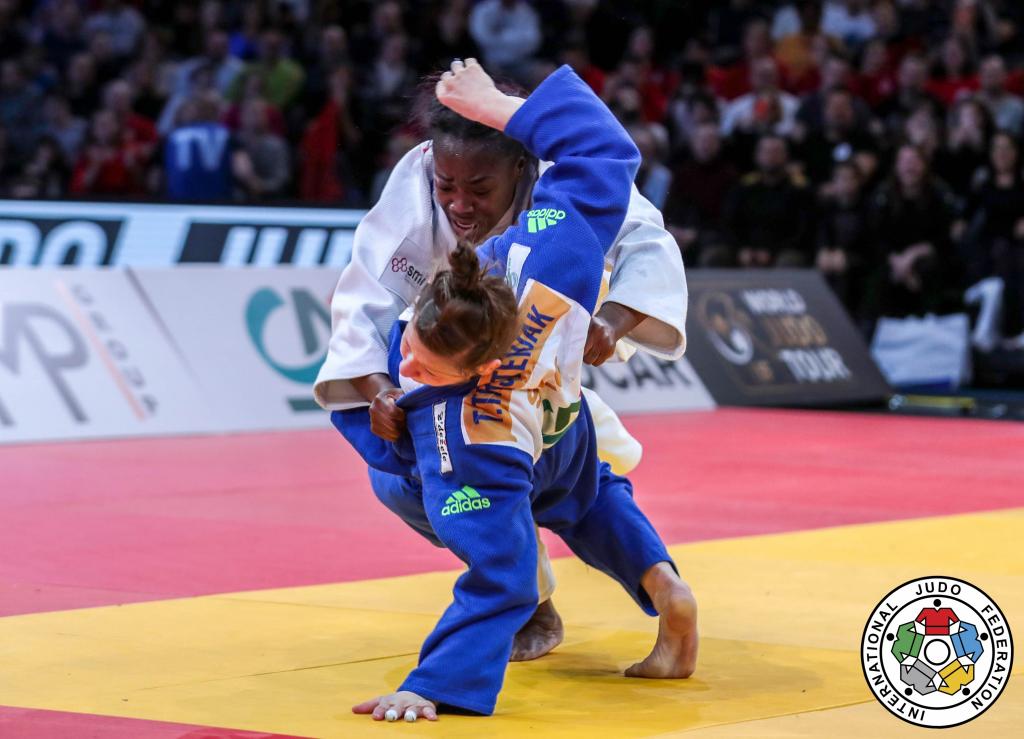 Make no mistake, as many athletes will confirm, the Accor Hotels Arena in the heart of Bercy is one of the most intimidating venues on the IJF World Tour. That is as true for both visiting athletes as it is for the French team. And so, it was that on this, the opening day of competition of the 2019 Paris Grand Slam, one could sense the tension in the air as expectations from the home fans ran high. Who from the French team would step up and present them with a home gold medal. That task, honour and saving grace fell to Clarisse AGBEGNENOU (FRA) who in a cracking final overcame her long time rival current Olympic champion Tina TRSTENJAK (SLO).

Indeed, the three minutes of golden score showed that, at times, the necessity to allow extra time makes for incredible drama and genuine crowd appreciation. There will undoubtedly be another meeting for these two who represent the biggest and most intense rivalry in women’s judo. For the past five years Agbegnenou and Trstenjak have operated a shut out of major titles with one or either of them taking the last four world titles and the last Olympic Games. That fact is unlikely to change, and today’s performance suggests that whilst the chasing pack may upset one of them, the chances of defeating both on the same day are slim to none. The bronze medals were won by Andrea LESKI (SLO) and NABEKURA Nami (JPN).

There was drama aplenty too in the -66kg category where current world champion and odds on favourite ABE Hifumi (JPN) was unceremoniously bundled out in his opening contest by current junior world champion Manuel LOMBARDO (ITA). The Italian in turn lost to Denis VIERU (MDA) who went on to win the gold medal throwing Vazha MARGVELASHVILI (GEO) with a perfectly executed tai otoshi for ippon in the final. The bronze medals were won by Baruch SHMAILOV (ISR) and Georgii ZANTARAIA (UKR).

In the -60kg category the gold medal was won by current world champion TAKATO Naohisa (JPN) when in the final he defeated former world champion Yeldos SMETOV (KAZ). The bronze medals were won by Temur NOZADZE (GEO) and DASHDAVAA Amartuvshin (MGL).

In the -73kg category the gold medal was won by former world champion HASHIMOTO Soichi when in the final he defeated TSEND-OCHIR Tsogtbaatar (MGL). The bronze medals were won by Lasha SHAVDATUASHVILI (GEO) and Fabio BASILE (ITA).

In the -48kg category the gold medal was won by KONDO Ami when in the final she defeated Distria KRASNIQI (KOS). The bronze medals were won by Melodie VAUGARNY (FRA) and Otgontsetseg GALBADRAKH (KAZ).

In the -52kg category the gold was won by former world champion SHISHIME Ai (JPN) when in the final she defeated TSNODA Natsumi (JPN). The bronze medals were won by Astride GNETO (FRA) and Odette GIUFFRIDA (ITA)

In the -57kg category the gold medal was won by Christa DEGUCHI (CAN) when in the final she defeated Jessica KLIMKAIT (CAN). The bronze medals were won by TAMAOKI Momo (JPN) and KIM Jisu (KOR).