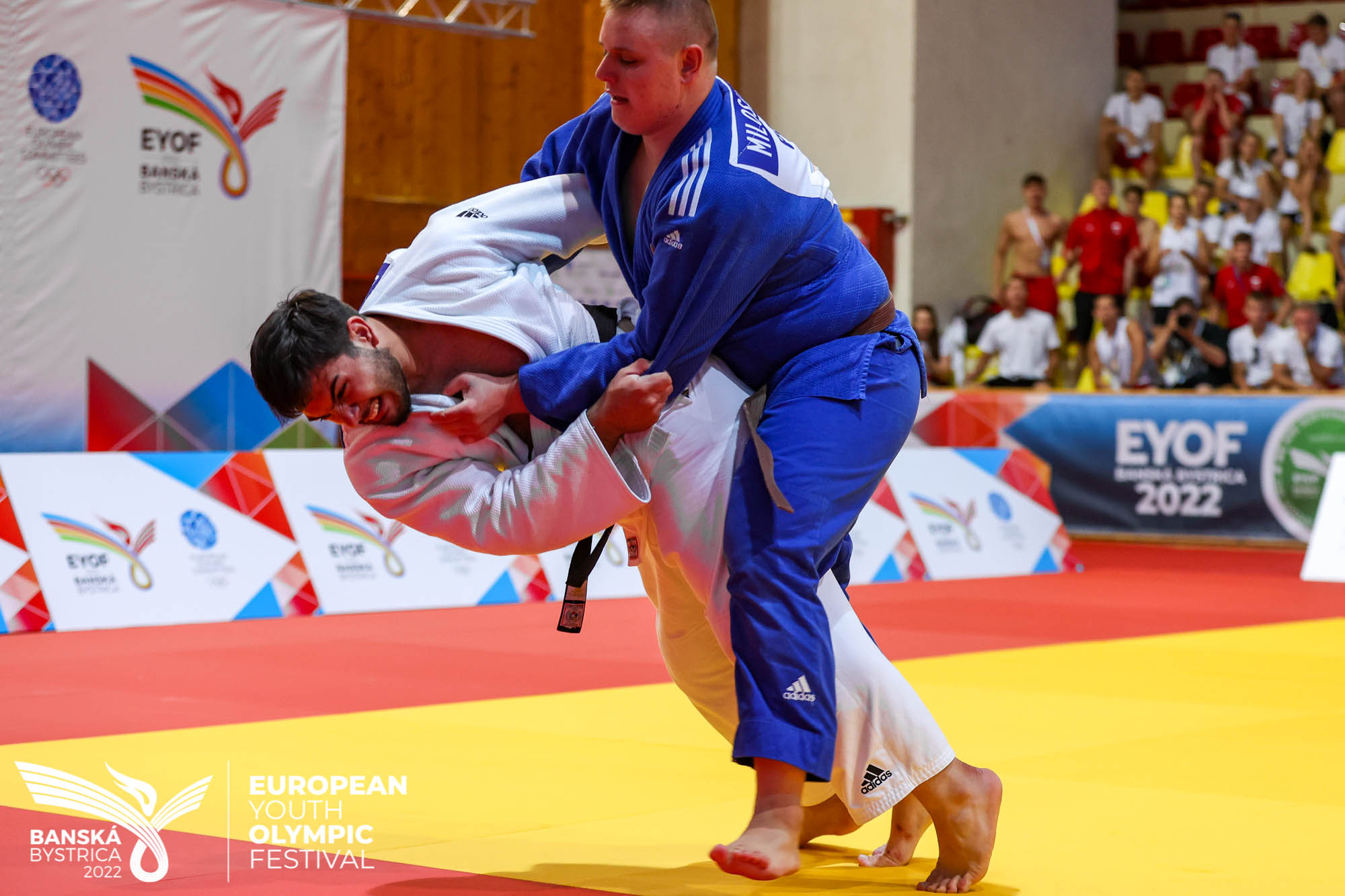 Number one seed Yelyzaveta LYTVYNENKO (UKR) was storming her category right off the bat, straight to the semi final. The youngster took a 5th place in the Tbilisi Grand Slam and then a bronze in the Madrid European Open just last month. She faced Fabia CONCEICAO (POR) who has proven herself on the junior scene already with a gold in Poznan this year. The Portuguese is the only athlete who managed to take out a top four in -78kg category after a tough round against Vanessa Asja HERIC (SLO). However Lytvynenko continued her gold medal quest, defeating Conceicao in the first minute with a strong ne waza sequence, using her long limbs to apply a strangle, winning by submission. In the remaining pools, Yuli Alma MISHINER (ISR) and Jovana STJEPANOVIC (SRB) had made their way to the end of their quarters with clean ippon records which made for an exciting semi final between the two. Mishiner and Stjepanovic looked to be on an even playing field but it didn’t take long for the Israeli to find her ippon with a drop seoi nage.

It took all of 10 seconds for Francesco BASSO (ITA) to eliminate the -100kg top seed Hubert ILLMER (AUT). A first exchange yoko otoshi ensured the Italian’s place in the semi final and avoided having to battle the Austrian. There was a domino effect as the next -100kg quarter lasted only 30 seconds between Joes SCHELL (NED) and Erik SAGHATELYAN (ARM), the Dutch winning with uchi mata. Bogdan PETRE (ROU) was up next with osaekomi at the minute mark with the last quarter between Giorgi BADUASHVILI (GEO) and BOTOS Noel (HUN) breaking the trend. Both looked to throw with uchi mata but left versus right was proving an issue for the pair, it was simply a case of waiting to see who would get the timing right. In the end Baduashvili took the win with o guruma.

Basso and Schell were not so fortunate in the semi final and endured an even and drawn out contest to decide who would compete for gold. Once the Italian scored his first waza ari with a counter attack, a tomoe nage followed to end the contest. Meeting Basso in the final is Petre, though Baduashvili gained the first score, some strong ashi waza and transition to ne waza saw the Romanian take the win.

The +78kg category was a little different from the rest today with a ‘round robin’ format, rather than a knock out pool. In Group A, Bintibe LANG (FRA) came out on top, winning both of her contests by ippon, and Morgana DE PAOLI (ITA) winning one. In Group B, it was a head to head between Diana SEMCHENKO (UKR) and Marcelina VRANJES (CRO), the Ukrainian winning in osae komi.

Azerbaijan’s hope for a gold was Kanan NASIBOV, but those dreams were dashed by Recep ERGIN (TUR) in the first of the +100kg quarter finals. Meeting Ergin in the semi final was Darius GEORGESCU (ROU) who took a 5th place in the Cadet European Championships, losing out to his team mate in Poreč for bronze. Georgia’s Giorgi TABATADZE was the executioner in his quarter with ippon after ippon, and had little issue making it to the semi final against Milosz KLOS (POL).

Georgescu really looked to be the dominant off the two, leading the contest in to golden score with his opponent Ergin. However a lapse in judgement meant he found himself in a strangle, putting him in to the bronze contest and sending Ergin to the final. It took Tabatadze a little longer to get to grips with his semi final opponent Klos, but just past the two minute mark, o goshi earned him a waza ari score and he finished the contest on the ground.

The final block will commence at 16:00 local time and live streamed at the EJU website.