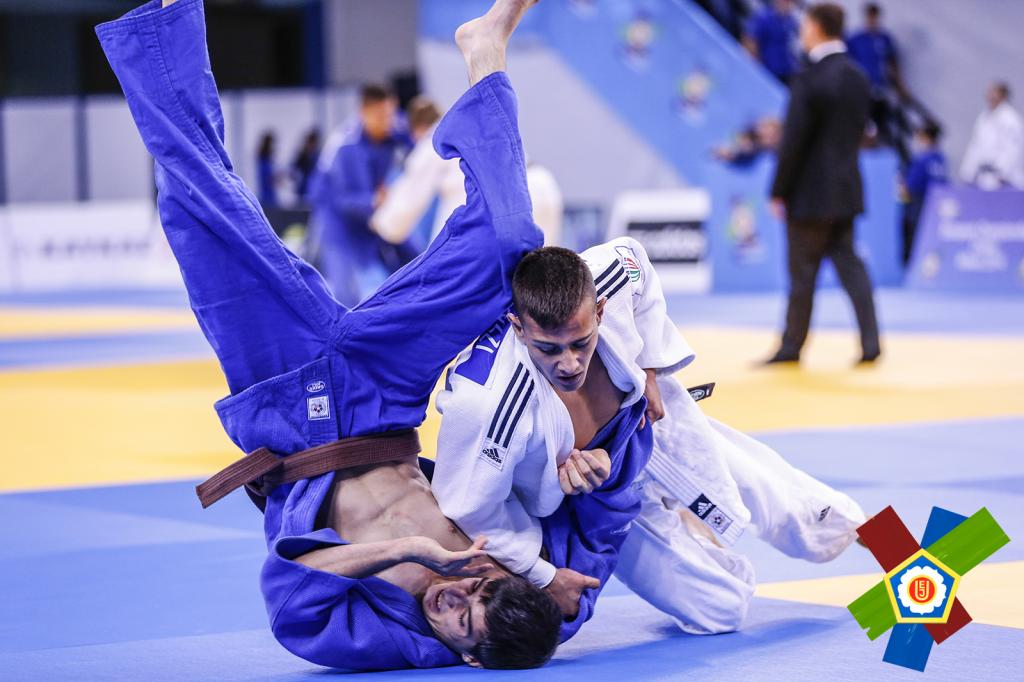 -50kg top seed Konstantin Simeonidis (RUS) overcame Ugurcan Zehir (TUR) only by shido in his first match before beating Vincent Sorgiati (FRA) more confidently in the quarterfinal. However, the Russian then lost in the semifinal against Temur Nozadze (GEO). Nozadze had faced his teammate Vano Khubashvili in the quarterfinal before fighting Simeonidis.
From the other side of the draw, Rustam Zabolotnyi (RUS) looked strong on his way into the semis where he defeated the tall Kryril Samotug (UKR). Now the Russian is up against Nozadze in the final. Samotug and Simeonidis are in the bronze medal matches.
A total of 31 boys competed in the -50kg.

The -55kg featured several strong contenders with 2013 Cadet World Champion Natig Gurbanli (AZE) and World Cadet silver medalist Robizon Beglarashvili (GEO) plus bronze medalist Jorre Verstraeten (BEL), who all made it to the quarterfinal. Top seeded Kazbek Achmizov (RUS) then fended off Beglarashvili’s challenge to proceed to the semifinal. His teammate Ayub Bliev was the other semifinalist in this pool after defeating Adrian Stoica. In the all-Russian semifinal Bliev threw Achmizov for Ippon two minutes into the contest.
Gurbanli made short work of Vertraeten and in the second semifinal, achieving Ippon after 39 seconds. Gurbanli will now meet Bliev in the final.
28 judoka competed in that category.

The -60kg boasted 37 entries and was wide open. Top seed and2013 European Cadet bronze medalist Neil MacDonald (GBR) first disposed of Mark Altosar (EST) as well as of Maik Dittrich (GER) and overcame a challenge by Asim Mamyedov (UKR) in the quarterfinal. However, Romaric Bouda (FRA) was too strong for him in the semifinal and relegated the British judoka to the bronze medal match. Bouda fought well on his way to the semis, ousting Jambuli Kurdiani (GEO) and Giovanni Esposito (ITA).
Ofek Shani (ISR) is Bouda’s opponent in the final. The Israeli advanced after his opponents Twan van der Werff (NED) in the quarter- and Thomas Macrez (FRA) in the semifinal were disqualified. Both the Dutch and the Frenchman are in the bronze medal matches, against Mamyedov and MacDonald respectively.

In the -40kg, top seed Justine Deleuil (FRA) advanced to the final with wins over Lidia Marin (ROU) and Marija Ivkovic (SRB). She will face Lois Petit (BEL) in the final. Petit sent Vasiliki Kourri (CYP) to the repechage and Aida Bibkova (RUS) to the bronze medal match. The field in this category consisted of 12 judoka.

In the -44kg, defending European Cadet Champion Leyla Aliyeva (AZE and 2012 European Cadet Champion Amber Gersjes (NED) met in the quarterfinal. In what was a close match, Aliyeva prevailed by shido. She then defeated Jana Schmitz (GER) in the semifinal by pinning her to the mat and will meet number one seed Michela Fiorini (ITA) in the final.
Fiorini proceeded to the semifinal over Kincso Mihalovits (HUN) and Tugce Beder (TUR). In the semis, the Italian beat Aniek Norder (NED) ahead of time.

In the -48kg, top seed and 2013 European Cadet Champion in the -44kg , Anastasya Turcheva (RUS), was upset in the quarterfinal by Blandine Pont (FRA). Pont went on to overcome Alessia Ritieni (ITA) in the semifinal by yuko.
Rabia Senyala (TUR), the defending silver medalist in this category, sent World Cadet bronze medalist (-44kg) Marusa Stangar (SLO) to the repechage on her way to the semis. She advanced to the final after her opponent Ekaterina Dolgikh (RUS) was disqualified.
In the final, Senyala will face Pont.
Turcheva and Dolgikh will fight for the bronze as will Stangor and Ritieni.
2013 European Cadet bronze medalist Mzia Beboshvili (GEO) had lost to Ritieni in her first contest and then also in the repechage. 29 athletes competed in this category.