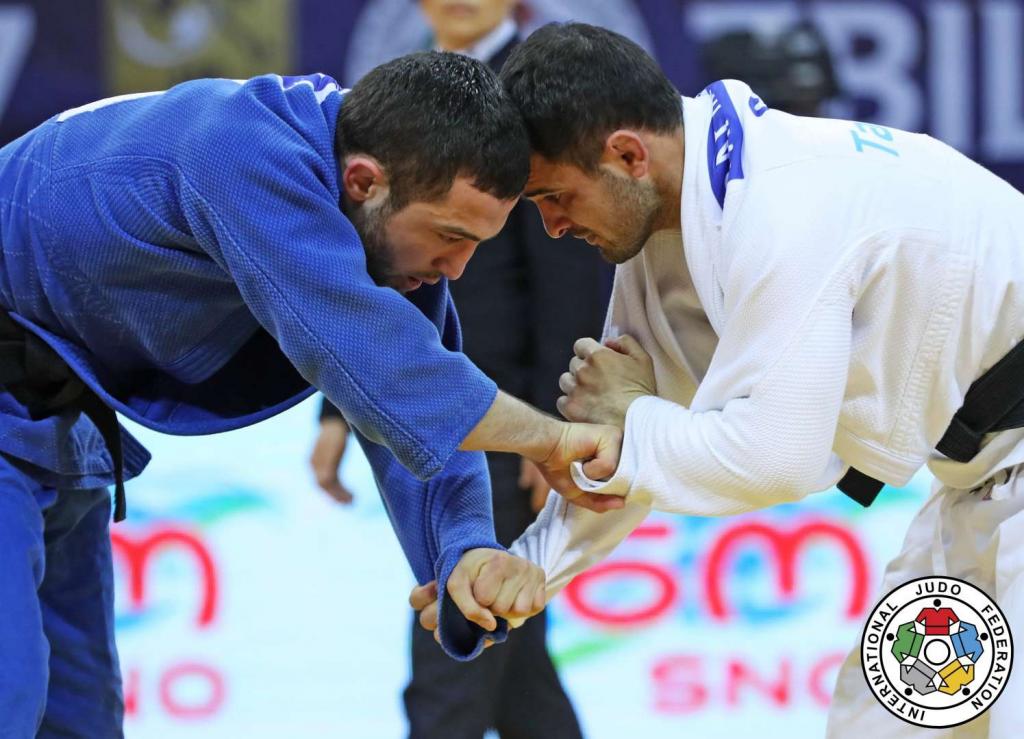 The opening day of competition at the Tbilisi Grand Prix saw 23-year old Lukhumi CHKHVIMIANI (GEO) take what may reasonably be regarded as a surprise gold medal in the -60kg category. Seeded number six, the Georgian began his day with a narrow win over Jorre VERSTRAETEN (BEL) in golden score where the Belgian picked up a third shido. That early contest served to wake up a rather lethargic looking Chkhvimiani who proceeded in the second round to dominate Sahib ASGAROV (AZE), countering first for waza ari with te waza the Azeri’s attempted uchi mata, then again countering with te waza Asgarov’s o uchi gari this time for ippon. In the quarter final Chkhvimiani was able to step up a gear throwing JAGVARLDORJ Amarbold (MGL) for waza ari first with okuri ashi braai then, with 30 seconds left on the clock, catching the Mongolian with a low right sided morote seoi nage that scored a second waza ari.

Waiting in the semi final was number two seed Mukhriddin TILOVOV (UZB). This turned out to be an epic battle where after two minutes of golden score Chkhvimiani eventually succeeded in securing okuri eri jime for ippon. This put the Georgian into the final where he was up against team mate and number one seed Amiran PAPINASHVILI (GEO). In stark contrast to Chkhvimiani who had taken four years and 20 attempts to reach his first ever IJF World Tour final, Papinashvili boasted a record of 20 IJF World Tour medals. But Papinashvili failed to bring the necessary intensity to the contest, inadvertently allowing Chkhvimiani to settle, build a lead and in the end take the match and with it the gold medal.   Two scores from Chkhvimiani were enough for the underdog to seal the win. The Georgians can still celebrate despite Papinashvili’s loss and it may yet be that Chkhvimiani, having now tasted success, will be inspired to repeat today’s performance elsewhere.

All results can be found on ippon.org