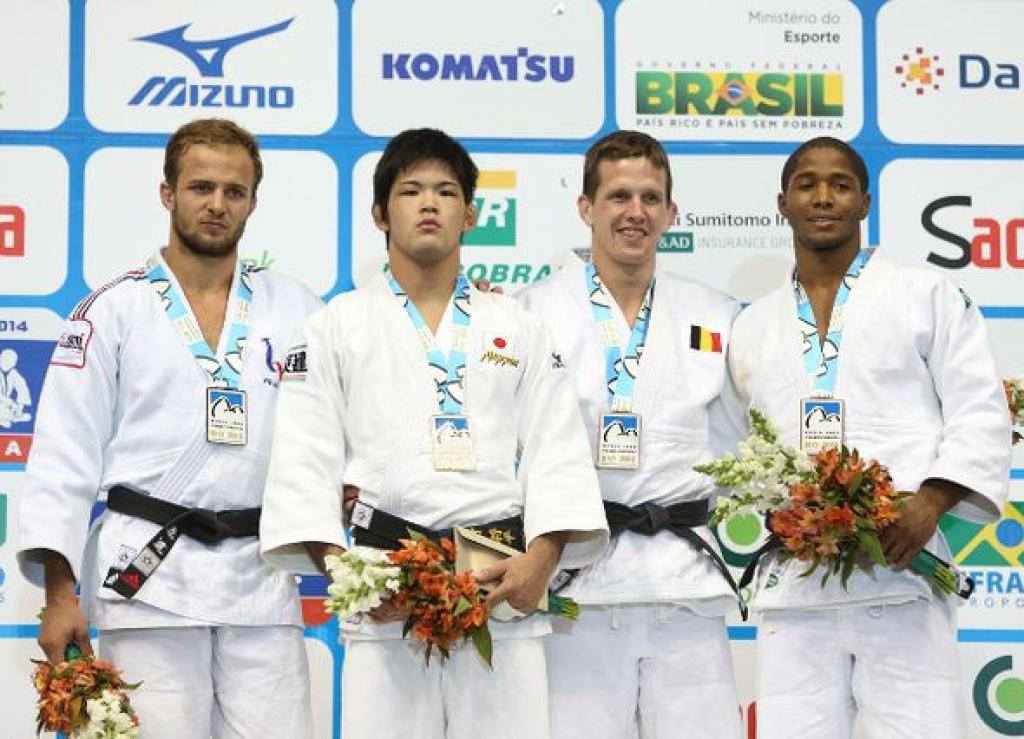 Five medals for Europe at the third day of the 2013 World Championships at the Maracanazinho on Wednesday. Japan’s youthful team continued to excel on day three as 21-year-old ONO Shohei (JPN) was crowned world champion with a superb win against Ugo LEG

ONO, the 2011 Junior world champion and Paris Grand Slam bronze medallist, was expected to be severely tested against the accomplished and hugely experienced Frenchman who won bronze at London 2012. That challenge failed to materialise as ONO scored a yuko from an uchi-mata after 90 seconds and sealed the win with a flashing hane-goshi earning ippon. After stepping off the medal podium LEGRAND entered the mixed zone and told the media: “It was a horrible day for me, I had to take it one fight at a time, and every fight was a battle, a tactical battle and especially with the two Mongolians. At the end I’m really happy because it was my first world final and again I’m on the podium at a major event. It has been a difficult year after London 2012 but once again I showed I’m capable of being amongst the best players in the world.” LEGRAND booked his place in the final by winning the showdown of London 2012 bronze medallists against SAINJARGAL Nyam-Ochir (MGL). A ko-soto-gake attempt from LEGRAND eventually earned a waza-ari having first been awarded to World Judo Masters winner SAINJARGAL and then corrected. The first bronze medal was won by world number two and Moscow Grand Slam winner Dirk VAN TICHELT (BEL) who battled past surprise package Dastan YKYBAYEV (KAZ). After YKYBAYEV received two shido penalties for passivity VAN TICHELT sprung forward into action and threw with a drop seoi-nage for a waza-ari. The second bronze medal was won by two-time world silver medallist Dex ELMONT (NED) who saw off the challenge of SAINJARGAL. ELMONT went ahead with a yuko and confirmed the final place on the medal podium as he anticipated an attack and stepped to the side to push over the Mongolian with pure upper body force. -57kg: SILVA crowned world champion Roper and Bedeti take bronze Moscow Grand Slam bronze medallist Rafaela SILVA (BRA) stole the show on the day three as she clinched Brazil’s first gold medal of the competition by defeating Marti MALLOY (USA). MALLOY, who made good on her promise that she would reach the World Championship final after winning gold at the Miami Grand Prix, was penalised for breaking grips with two hands as SILVA was spurred on by the capacity crowd. SILVA threw MALLOY with a ko-soto-gari which earned a waza-ari but the score was amended to ippon as the jubilant SILVA ran to hug her coach as the scale of her achievement hit home. SILVA earned a place in the final by dominating European champion Automne PAVIA (FRA) en route to a victory by waza-ari while MALLOY beat Miryam ROPER (GER) with a sumi-gaeshi being awarded ippon. The first bronze medal was won by 21-year-old former European bronze medallist Vlora BEDETI (SLO) who bested 19-year-old Junior world champion YAMAMOTO Anzu (JPN). The young stars of the category failed to trouble the scoreboard and the contest went down to shido penalties with three against YAMAMOTO and two against BEDETI who ran off the mat in tears of joy. The second bronze medal was won by world number three Miryam ROPER (GER) who avenged her European championship defeat to Automne PAVIA (FRA) with a fine win on the World Judo Tour’s highest stage. ROPER scored a waza-ari from a ko-uchi-gari but that was upgraded to ippon and an ecstatic ROPER screamed with delight. The 31-year-old German could barely believe what she had accomplished as the crowning achievement of an unbelievable year which had already seen her establish herself as one of the best performers on the World Judo Tour with results such as Grand Slam wins in Baku and Moscow. Text by IJF Media