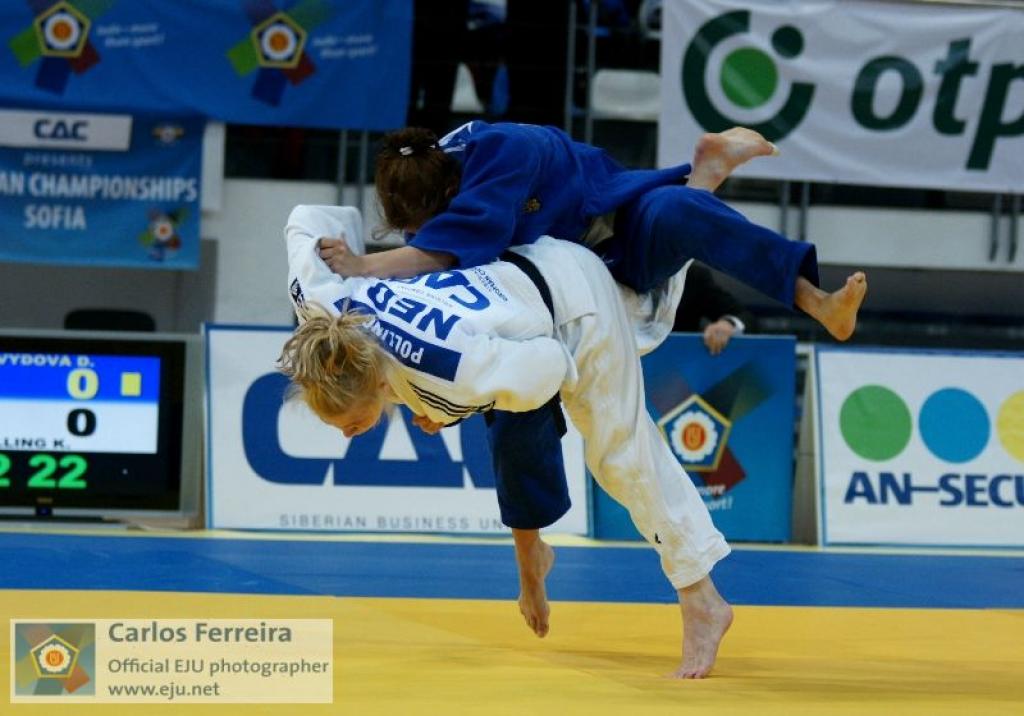 Five different countries won the European junior titles today. Good for the level which was high anyway. The category U57kg was maybe the best surprise. Not the more expected Swedish Emma Barkeling, Croatian Andrea Bekic or Romanian Loredana Ohai won the medals but Helene Receveaux took the title on behalf of France. Although she had showed that she was capable of winning major events like in Arlon and Leibnitz, she wasn’t expected top win the gold today. She succeeded Automne Pavia who took the title in 2007 and who recently fought at the World Championships in Tokyo.
Ohai won the bronze today as she lost to Receveaux, but was able to defeat both talents Barkeling and Bekic who finished out of the medals.
Receveaux defeated Bulgarian judoka Ivelina Ilieva who won the silver. The last medal for Bulgaria was in 2006 for Genko Ivanov U100kg. It was the sixth female medal for Bulgaria ever in a European Junior Championship, five of them were lost finals.
For France it was the 20st European Junior Champion since the first in 1987. Since 2006 France have always won a gold medal in the women’s category. Audrey Tcheumeo was the last to win gold in 2008 and 2009.

In the women’s U63kg it was Nina Milosevic from Slovenia who picked up the gold against Croatian Andreja Dakovic. Milosevic is another talent in this category for Slovenia besides Urska Zolnir and Vlora Bedzeti. Milosevic won the 7th European junior title for her country. Urska Zolnir won the first two in 1997 and 1999. Six out of seven were young women, Aljaz Sedej was the only men to win the European U20 title. He also collected the U23, just like Rok Draksic. So the Slovenian men seem to flourish at a later age.
It was the first ever final for a Croatian woman in a European U20 final.

In the women’s division U70kg Dutch Kim Polling was one of the favourites for the title and she took the gold this time. Last year in Yerevan she lost her final, but today there was no doubt who was the strongest. In the final against Daria Davydova she destroyed her opponent with a smashing ippon. She has won so much this year that she was the undisputed favourite. Holland celebrated this 52nd title as last year The Netherlands wasn’t able to win a medal for the first since 2005. Holland always has quality feminine talents but in the seniors the pool is limited, resulting this year in not a single women’s medal at the World Championships in Tokyo. Good to know that the tall Polling is still knocking on the doors in this category.
Miriam Dunkel (GER) surprised Lucie Perrot (FRA) for bronze, although she escaped in the last second for an ippon on the ground in a difficult situation but the time was up for Perrot. Olena Petrechenko (UKR) made a beautiful score in her bronze fight against Bernadette Graf (AUT).

In the men’s category U81kg Georgian Avtandil Tchrikishvili won the gold with a splendid ippon, although the video footage convinced the referees, but Tchrikishvili was indeed the right winner who was first awarded a waza-ari against Aleksandar Kukolj. Georgia now won five gold medals in a row since 2006, each year one.
Kukolj won the second medal this event for Serbia while Serbia has never won a medal since 2003 when Srdan Mrvaljevic won the first ever medal.
Albert Kostoev scored a beautiful point with a low tai-otoshi against Tural Safguliyev and won the bronze. Max Münsterberg scored a great point against Hungarian Krisztian Toth and won the second bronze.

Russia and Georgia are now leading the tally with both two gold medals.