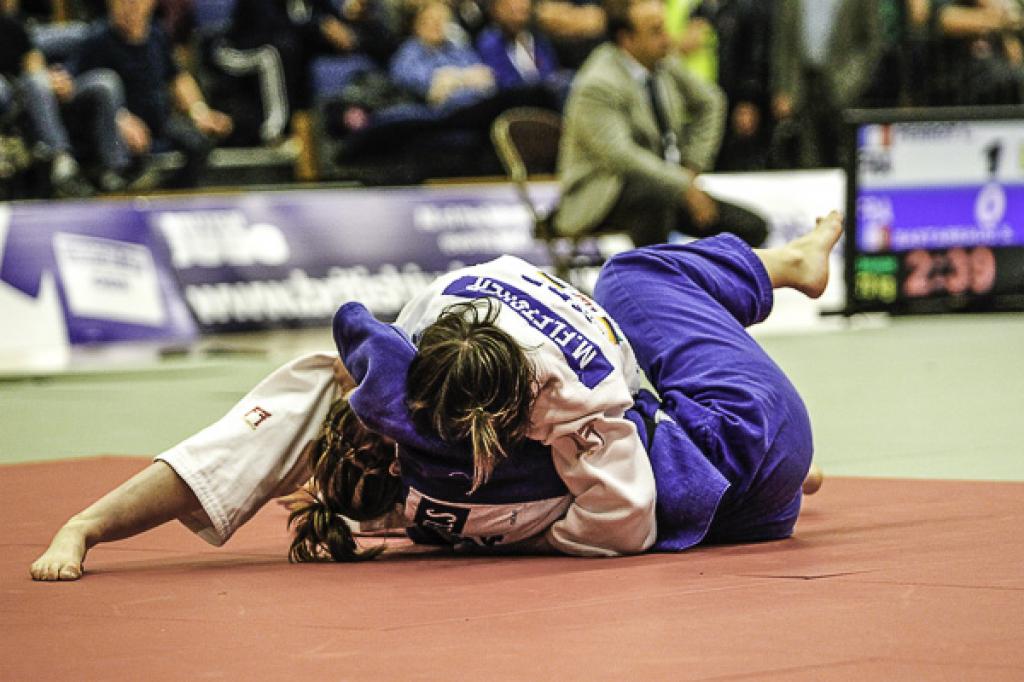 Over 300 judoka were in action at K2, Crawley, with 29 countries represented in the two-day long event.

France topped the final medal table with a total of 19 medals, including four golds. Great Britain were second with The Netherlands third.

Ben Fletcher won the gold medal in the -100kg weight category. In the final, the Bath judoka held down Dutch athlete Tobias Mol for ippon to seal the win. Portugal’s Jorge Fonseca and Clement Delvert of France won bronze.

His sister Megan held down Audrey Fels to win bronze in the -70kg category. The gold medal went to Sanne Lisa Van Dijke of the Netherlands who beat France’s Valeriane Fichot in the final. Lucie Perrot of France took the other bronze.

Andy Burns started the Great Britain charge in style with a powerful display in the -90kg category, winning by ippon after being a yuko up against Netherlands athlete Michel Verhagen. He earlier beat Gary Hall in the semi-final. There was an all-GB bronze medal contest, where Hall got the better of Frazer Chamberlain, throwing him for ippon to take the medal. Pierre David of France won the remaining bronze.

In the -81kg category Owen Livesey won a bronze medal for Great Britain. The Camberley athlete beat Centre of Excellence athlete Max Stewart earlier in the competition and was victorious over Jeremie Bottieau of Belgium for bronze. In the other bronze medal contest, Tom Reed placed fifth after losing to David Miccoli of the Netherlands. Gold went to Dutchman Neal Van De Kamer with Dimitri Gomes Tavares of France getting silver.

Royal Marine Chris Sherrington was in the medals in the +100kg category. He bounced back from an early defeat to claim bronze. Alessio Mascheti of Italy won the gold with a victory over Iceland’s Thormodur Jonsson, whilst the Netherland’s Pascal Scherrenberg won the other bronze.

In the women’s heavyweights (+78kg) Ketty Mathe of France pulled out a big ippon throw to beat Dutch athlete Martine Demkes in the final. Kirsty Rodgers could only get fifth for GB as she lost out to Janine Penders of the Nethlands in the bronze medal contest. Poland’s Joanna Jaworska won the remaining bronze.

Geraldine Mentouopou celebrated a gold medal in an all-French final in the -78kg category. Christelle Garry took the silver with Karen Stevenson of the Netherlands and France’s Marie Del Puppo getting the bronze.

“I’d like to congratulate all of the medallists and it was pleasing to see many GB athletes standing on the medal rostrum.

“I would like to thank all of the spectators, volunteers, staff, officials, competitors and friends at the EJU for making this a great event and we’re already looking forward to next year with bigger and better things to come.”

Watch all the photos from London in our photo gallery