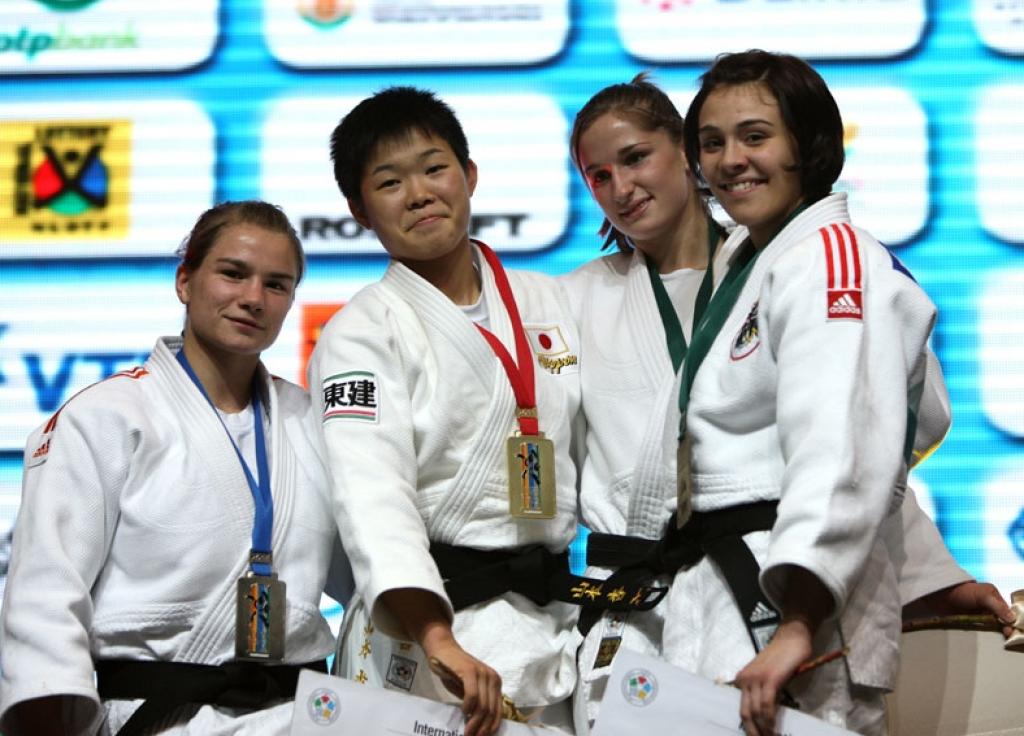 Japan was the undisputed winner of the second day of the World Junior Championships in Capetown. They won all four categories and is now leading with seven out of eight categories, a remarkable score. For Europe eight medals, among them two finallists.
European Champion of Lommel Oleksandra Starkova (UKR) qualified for the final U52kg but wasn’t able to stop Takumi Miyakawa of Japan.
Dutch Floortje Stoop won a great bronze medal after finishing seventh in Lommel at the Europeans. She defeated Eleudis Valemtim (BRA), last year’s bronze medallist. The third European medal was for Swiss Cheyenne Bienz who defeated Chinese Liu for bronze.

Dutch Sanne Verhagen won silver today in Capetown. Despite the Japanese power she did really well and started with a win against senior world medallist Rafaela Silva (BRA). In this strong European class Verhagen was able to defeat Emma Barkeling (SWE), Ana Kokeza (CRO) and Fabienne Kocher (SUI) in her road to the final. Kocher and Barkeling both won bronze in Lommel where Verhagen took the silver medal behind European Champion Tugba Zehir, who ended fifth after her loss against Austrian Tina Zeltner. Zeltner is the tenth Austrian medallists at world junior championships. Claudia Heill and Patrick Reiter both won two medals for Austria that won 12 medals in total. Fabienne Kocher (SUI) prolonged her bronze medal of Lommel in her match against Loredana Ohai (ROU). Verhagen lost the 12th final for the Netherlands, four of them in this category U57kg and in the past U56kg.

The third European finalist was Magomed Akhmarov of Russia. Akhmarov was defeated in the golden score by Sho Tateyama in the final U66kg by immobilisation. Lasha Shavdatuashvili (GEO) won the bronze as well as Dongkyo Lee of Korea who won doubtfully by a penalty in the quarter final for the much more active Shavdatuashvili. The Georgian came back strongly and won bronze after all. Nobody was able to beat Tateyama and any of the Japanese today.

Shohei Ono (JPN) won the gold U73kg. Vladimir Zoloev won bronze against Sagi Muki who had won bronze in Lommel in September. Japan is now leading the medal tally after two days by seven gold medals. Russia is the only country to win gold. The Netherlands is the second best European nation taking two medals today.