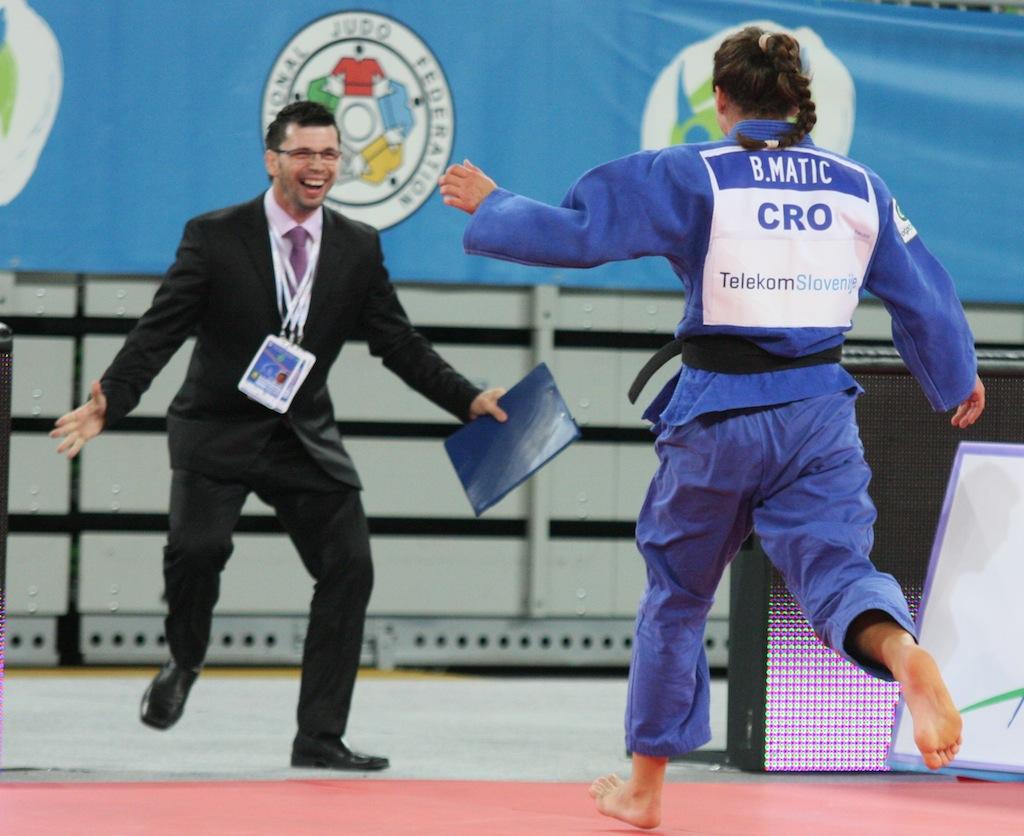 Day three of the World Championships in Ljubljana had the maximum number of gold medals for Europe.

Four new world champions brought us a sensational day at this championship where 11 nations have won a gold medal. In 2011 at the last edition Japan alone won 12 gold medals, can you imagine the difference in two years time. In the home country of the current Olympic Champion Urska Zolnir it is extra special to become World Junior Champion. Dutch Do Velema sensationally took the world title. Velema is the current European Champion but wasn’t expected to take the world title as well, and against Tsugane not many would have thought she could win. The Japanese was the winner of the Grand Slam of Tokyo in the seniors. But both ladies only differ only 26 days and Velema is still learning by the day. As long as she could keep her impartiality in her final like she proved in previous matches. In the final she had a tough start with two penalties and was aiming for a takeover. She succeeded only one time, twenty seconds before the end she hit Tsugane with her devastating Harai-Goshi and grabbed the world title, her sponsor money of this year and the attention of 2010 World Junior Champion Kim Polling who supported her among others. Velema still 17 will get to a next challenge from tomorrow to stay this good, this dedicated. Let’s see if she gets a chance at Senior level next year, a logical step for a world champion. Mungunchimeg Baldorj of Mongolia won the bronze medal in a tough women’s fight against Greek Elisavet Teltsidou. Teltsidou was the winner of a pool with Magdalena Krssakova as one of the favourites but she lost to Santos (BRA) who was defeated by the Greek talent. The second bronze was for Cuban Maylin Del Toro who defeated Nadja Bazynski of Germany. The semi finalist defeated strong opponents today in Wisneybi Machado (VEN) and Baldorj and led by waz-ari against Do Velema in the semi,but lost on the ground and couldn’t prevent that the yuko of Del Toro was enough for Cuban bronze. Alexios Ntanatsidis brings Greece the world title Alexios Ntanatsidis only needed two minutes to win the world title in the final. What a sensation for Greece to win the second ever World title. Tariel Zintiridis won gold in 2006 and Ilias Iliadis obviously two world titles in the seniors in 2010 and 2011. Alexios Ntanatsidis was impressive in his five matches against Lim (KOR), Duarte (ARG), Mehdiyev (AZE) and Gutsche (GER) in the semi final. In the final Kenya Kohara of Japan was a strong opponent as he had beaten European challengers D’Allesandro (ITA), Stewart (GBR) and Ressel (GER) in his road to the final, but there he didn’t get a chance. Dominic Ressel crowned a great day with a bronze medal, not easy to fight his compatriot Robin Gutsche but a wazari made the difference in this match. Gutsche won his pool where Ressel lost his quarter final against Kohara but he won his last two matches. Mammadali Mehdiyev (AZE) won bronze for Europe against Aslan Lappiganov (RUS) for a waza-ari. The Russian lost the semi final against Kohara who was clearly the best today. Mehdiyev was beaten by Alexios Ntanatsidis of Greece in the quarter final.   Barbara Matic writes history with first World title for Croatia Croatia has its first world title, it will be cherished with love. The many Croatian fans saw an amazing power throw by Barbara Matic after 68 seconds in the match. It was either Barbara Matic or Japanese Chizuru Arai to take the world title, such power, such will but it was Matic who benefit and scored a direct ippon, taking the best price in her amazing career. The highlight for Croatia in its 60 years of history. The first World Champion for Croatia showed she was the number one candidate today. Matic was not even 10 minutes on the tatami today. Amy Livesey (GBR) was defeated after two minutes, Monika Burgess (CAN) in 7 seconds, Ekaterina Tokareva (RUS) in 2:09 and only Szaundra Diedrich held Matic busy for four minutes. The medal was handed out by Croatian President Sanda Corac at this historic day for Croatia. Three Europeans in the two matches for bronze and double efficiency for Margot Pinot of France who lost in the semi final against Arai. Pinot was expected to end up in the final block but she needed the full time to defeat Uzbek opponent Matniyazova based upon two penalties. Szaundra Diedrich claimed the second bronze of the day for Germany. In her match against Valeria Ferrari she followed up the bronze of Lisa Schneider in 2011 in the same category. Beka Gviniashvili steps into the golden generation The final between Samat Yessen of Kazachstan and Georgia Beka Gviniashvili was exciting to the bone. Gviniashvili was close after one minute with an armlock but Yessen could escape in the last and only moment. The sensation of Kazachstan impressed the whole day with amazing judo in a field of 40 judoka. Gviniashvili is the recent European Champion and in advance one of the major challengers for the title. He scored a yuko one minute before the end and could secure his fold medal with a wazari and oseikomi to finish the match. Revazishvili, Vazagashvili, Mamrikishvili, Zviadauri, Gujejiani, Liparteliani and Tchrikishvili are impressive judoka who won the World junior title for Georgia before Beka Gviniashvili. Most were able to make the transition to world senior level. Today Gviniashvili proved he is ready for the seniors. Poland and Brazil conquered the bronze medals in this category U90kg. Patryk Ciechomski of Poland won five fights but couldn’t not defeat Gviniashvili. In his last match he overcame Japanese Kobayashi by waza-ari and added another great medal for the Polish team. Panam champion Henrique Silva added his second World level medal. In 2009 he won silver at the Cadet Judo Championships. Watch all photos in our media gallery.