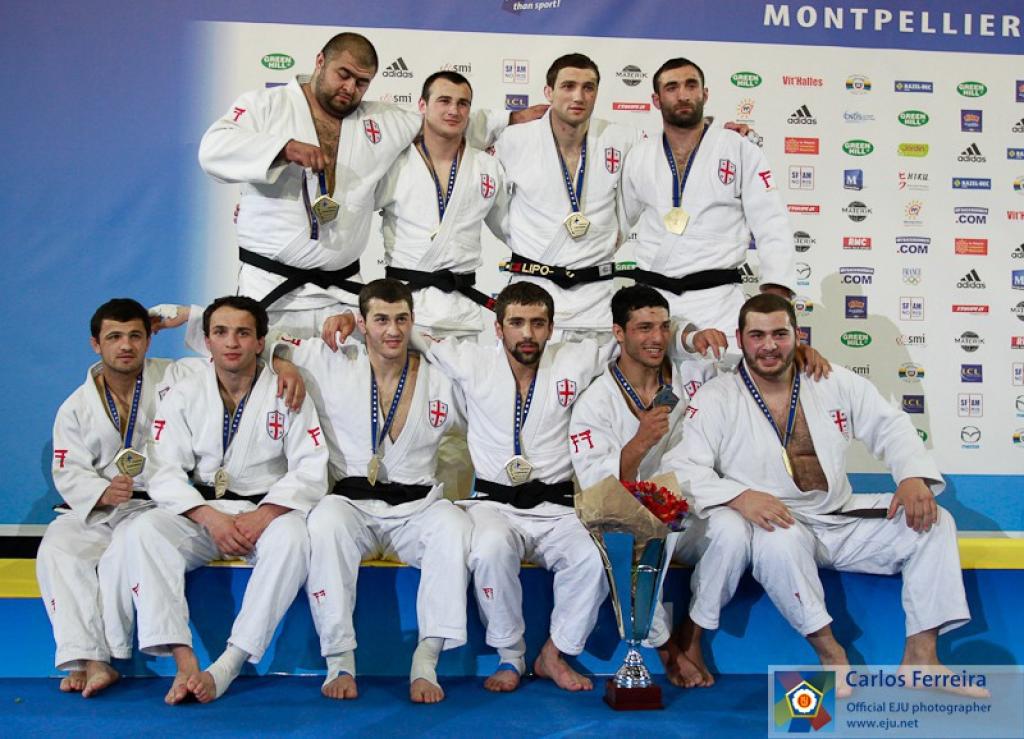 The French women’s team and the men’s team of Georgia struck gold as the European Judo Championships 2014 concluded in Montpellier, France with the team competition on Sunday.

The French women had a harder time than expected in the semi-final against Slovenia, but prevailed 3:2. The Germans defeated Russia clearly 5:0 in the semi-final. In the final, France and Germany faced each other like they had in 2011 and again the French came out on top. The German team scored the first point with Mareen Kraeh in the lightweight, but then Automne Pavia, Clarisse Agbegnenou and Gevrise Emane collected three points in a row for the French team. Luise Malzahn picked up the last point for the Germans.

“To end this championship with the team title here in France is great”, Pavia said.”We are the best. Everybody fought well today and it was perfect”, Audrey Tcheumeo added. “We are a wonderful team and I think in the months to come we’ll show many more great performances”, said Emane.

“We fought well and we gave everything we had. We experimented a bit. We are still working on winning the title one day”, Miryam Roper said on behalf of the German team.

Slovenia and Poland claimed the bronze medals. Slovenia beat Great Britain clearly 5:0. “It is perfect, especially for me, since I didn’t compete for one year and eight months”, Olympic Champion Urska Zolnir said. She won the Olympic gold in 2012 in the -63kg and now fought for her team in the -70kg. “Two days ago the coach asked me if I want to fight and I even had to buy a judogi”, Zolnir revealed. “Winning bronze is great for our team. We were fifth at the European and World Championships, but we never won a medal in the team event. Our coach Marian Fabian had a great tactic against all teams. It was wonderful to be involved in this experience”, Zolnir explained. However, she pointed out that this does not mean a return to competition for her, it was just for fun and she will continue coaching.

The Polish team overcame Russia 3:2. “We had a silver medal before a few years back. It is very exciting now to have the bronze and it will motivate us for the future”, said Agata Ozdoba. “We will celebrate on the bus on our way home. We are leaving right after the competition, but we can’t celebrate together, because some of us are taking the plane.”

In the men’s competition, there were quite a few tough matches between Georgia and France in the semi-final and rematches of the finals in the individual events. In the end, the Georgians advanced 3:2. It was a little easier for the Russians, who beat the German men 4:1.

Georgia and Russia met in the men’s team final as they had in 2012 and 2013. Georgia had won both times and now added a third consecutive title to their repertoire. Russia’s Alim Gadanov won the first fight in the lightweight, but then Nugzari Tatalashvili, Avtandil Tchrikishvili, Varlam Liparteliani and Adam Okruashvili pocketed one point after the next to lead their team to victory. Russia took silver one more time.

“The team event is a different feeling for us, because each of us got a gold medal today. It is a big joy for everybody”, Liparteliani said. “The team event is more important, because you are not alone. You are there for your team, for your country”, added Tchrikishvili. “We are friends and in the team we are all for one and one for all”, commented Levani Matiashvili.

The Russian were somewhat disappointed. “We had the chance to win, of course. Our teams are equally strong, the Georgians are just a bit stronger in two categories. The Georgians always send their best team. We want to take our revenge at the World Championships”, Gadanov told the press. “We are not satisfied, obviously. We lost for the third time in a row at the European Championships. We’ll continue to work in the same way as before and hopefully next time we will win”, Murat Khabachirov said.

The bronze medals went to France and Germany. France beat Slovenia in the bronze medal match 4:1. “We really wanted to win the title here in France. The Georgians in the semi-final were really strong, but it was close. We could have won against them”, Ugo Legrand said. “Everybody was a little tired today after the individual events”, he added.

The German men won 4:1 over the Czech Republic. “We really deserved this bronze medal. Now our goal is to get into the final in the team event at the World Championships. We were third last year and you want to improve”, Alexander Wieczerzak commented. “We were really excited that we won bronze last year and it is great that we were able to confirm this result”, Marc Odenthal added.

Before the final block, the President of the French Judo Federation, Jean-Luc Rougé, handed over the EJU flag to EJU President Sergey Soloveychik, who passed it on to George Kerr, honorary President of the British Judo Association. Glasgow will host of the European Judo Championships 2015.