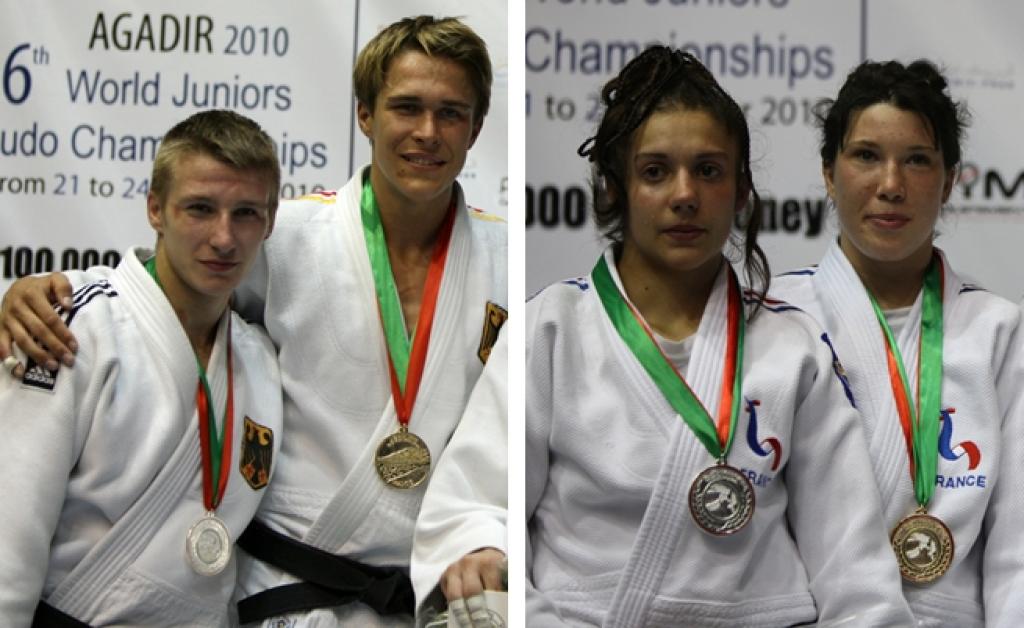 Very special finals today at the second day of the World Junior Championships in Agadir, Morocco. In the men’s U73kg final a direct confrontation between two German judoka, and another European final between two French rivals in the women’s U57kg.

European U20 Champion Helene Receveaux was able to win the World title this time. Helene Receveaux defeated country woman Rachelle Plas in the final.
She collected the 14th ever World title for her country. Two athletes won the World title later in the senior division (Decosse and Riner), three athletes won an Olympic medal. Bruno Carabetta, Lucie Decosse and Teddy Riner, but none won the Olympic title. In total only 13 World Junior Champions ever won the Olympic title.

In the category U66kg Kento Shimizu defeated Nauryzbek Mailashev from Kazachstan in the final after a unanimous decission by the referees. His compatriot Yuki Hashiguchi finished third.
For Kazachstan this World Championships is as well extremely successful. It was their third final, one gold and two silver.
In this category not a single European medal. Arsen Tolasev (RUS) was the only European to finish in the top 8.

How different from the category U73kg with a full European podium.
In this men’s category it was German Alexander Wieczerzak who defeated his compatriot Hannes Conrad. Wieczerzak is only the third ever World Champion for Germany. Ralf Koser won the title in 1992 O95kg and Thomas Pille succeeded to win the world title in 2000 (U100kg) 10 years ago already.

Japan is obviously leading the medal tally with five gold medals after eight opportunities. Europe now won 15 medals, against 14 for Asia, 10 for Japan, 3 for Kazachstan and one for Uzbekistan today U66kg.
Kazachstan is second in the tally before the first European country France that collected four medals and today the first World title.