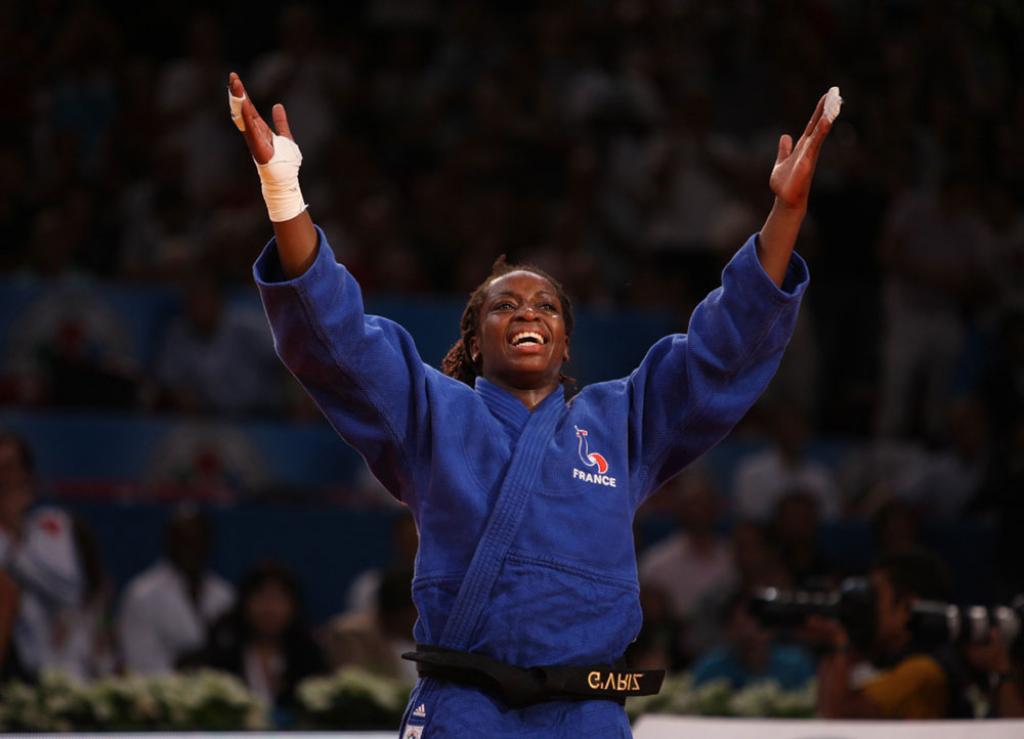 Yoshie Ueno was dethroned as the queen of international judo on Thursday on the third day of the World Championships after a day of surprises at the Stade de Bercy in Paris. Ueno, twice winner of the world under 63 kgs title, was beaten in the final by France’s Gevrise Emane to the delight of the home crowd.
Her victory made up for a disappointing start to the 136-nation event by the French team but Emane had looked impressive throughout the day and, in a scrappy semi-final, she scored a yuko with morote-seionage on the obdurate Elisabeth Willeboordseof the Netherlands to face Ueno, who was voted last Sunday as the outstanding female judoka of today by the International Judo Federation.
In her semi-final, Ueno was lacklustre against Urska Zolnir of Slovenia until the match had finished its first five minutes. With the contest going into extra-time and a ‘Golden Score’at stake, Zolnir was given a first shido. This opened up the contest and Ueno was finally able to penetrate the defence of her opponent and she knocked her opponent to the ground, holding her for 25 seconds with kamishihogatame (upper four quarters hold-down).

In the final, Ueno had huge trouble in getting the grip that she wanted against the 29 year-old triple European and world champion (in the women’s -70kg). Emane kept keeping her opponent’s left sleeve near her belt to help block any attempt at shoulder or hip throws. In the first five minutes of the bout, Emane was the superior, launching a couple of attacks of her own.
When the pair tumbled to the mat, Emane went to try jujigatame (straight arm-lock) but the referee ruled that it was out of the contest area. In the extra three minutes, Ueno received one shido for passivity and although she attacked furiously in the last minute, she could make no impression on the French girl, who was given a unanimous verdict by the officials.
The bronze medals went to Anicka Van Emden of the Netherlands and Zolnir. Van Emden defeated her compatriot Willeboordse with a yuko score with ouchigari and then held up a single finger to indicate that she was the No.1 in her country. Zolnir dumped Maricet Espinosa of Cuba with a pick-up for victory.

In the other category decided today, the men’s under 81 kgs, Jae Bum Kim of Korea retained his title but his opponent in the final, Srdjan Mrvaljevic of Montenegro was a surprise as he is only ranked 25th in the world. Never Montenegro was in a World Championships final, or even won a medal.
He upset Brazil’s Leandro Guilheiro, silver medallist in 2010, by getting a wazari for a sacrifice throw and although the Brazilian had three yukos on the board, the superior score of wazari meant that Mrvaljevic went through to the final.
Here, he was less impressive, rarely attacking in the early stages. Kim was outgripping his opponent and his frustrated opponent got two shidos, meaning that the Korean was ahead. Then in a newaza (groundwork) flurry, Kim secured a holding for 22 seconds to get a wazari. Mrvaljevic, knowing that he was well behind, now tried everything but it was too late and Kim kept out of danger, even being penalised with two shidos for his passivity.

The bronze medals went to Sergiu Toma of Moldova and Guilheiro. Toma’s opponent Loic Pietri of France tried a seionage (shoulder throw) only for Toma to bring his arms under his opponent’s neck and force the Frenchman to submit to a neat strangle. Guilheiro was the winner of the other bronze medal, producing a brilliant hip throw to dump Elkhan Rajabli of Azerbaijan for victory.
Thursday’s performances put again two modest European countries on the judo map!

Watch all pictures of Thursday here: