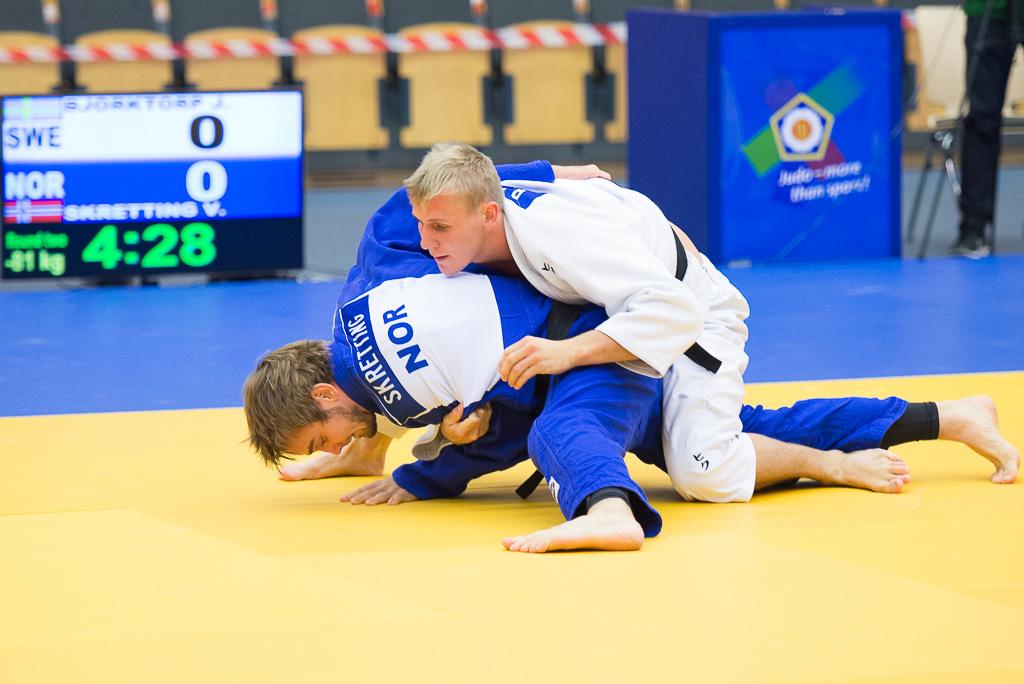 The heavier weight categories were contested on day 2. The biggest and toughest category was the men’s -81 kg with 27 contestants from ten countries. Sweden’s Olle MATTSON with a European ranking of five was the first seed in this category. He lost in the quarterfinal. Instead, fellow Swede Jonas BJÖRKTORP booked himself a place in the final after three convincing victories by ippon. His semifinal against Polish Damian STEIPIEN was a real nailbiter, where Björktorp was behind on a warning with two minutes remaining. In a very intense grappling situation he managed to counter his opponent with a powerful high lifting throw flat on his back. The final against Frenchman Benoit Collin was a tough battle, with many transition situations between attempts for throws and ground work positioning. After receiving a warning for passivity, Björktorp was forced on the offensive and had to take more and more risks the further the match progressed. This finally resulted in a situation where Steipien caught Björktorp in a hold that won the match and the title for him.

Swedish junior Emil Mattsson became the second Swede on the podium on day two by securing a bronze medal in the -100 kg category. ”In the absence of our national senior squad, our junior judokas were given a stage to show their capabilities at senior level. Many of them performed at the top of their ability and punched above their weight. There were some really surprising results and positive judo performed out there this weekend”, said Swedish Assistant Coach and responsible for the Junior squad, Jakob REINIUS.

France dominated the medals table with nine out of fourteen gold medals. Poland won two categories while Holland, Israel and Croatia each managed one gold. Sweden held on to the sixth place from day one. “We are very proud of the way we executed this prestigious event and I would like to say a big thank you to our more than 100 volunteers, who made it possible to deliver such a high quality tournament for our guests”, said Erik Vesterlund, General Secretary of the Swedish Judo Federation.

The competition was combined with the ”Judo4Life” training camp, which gathered an additional 230 young judokas who attended various sessions.