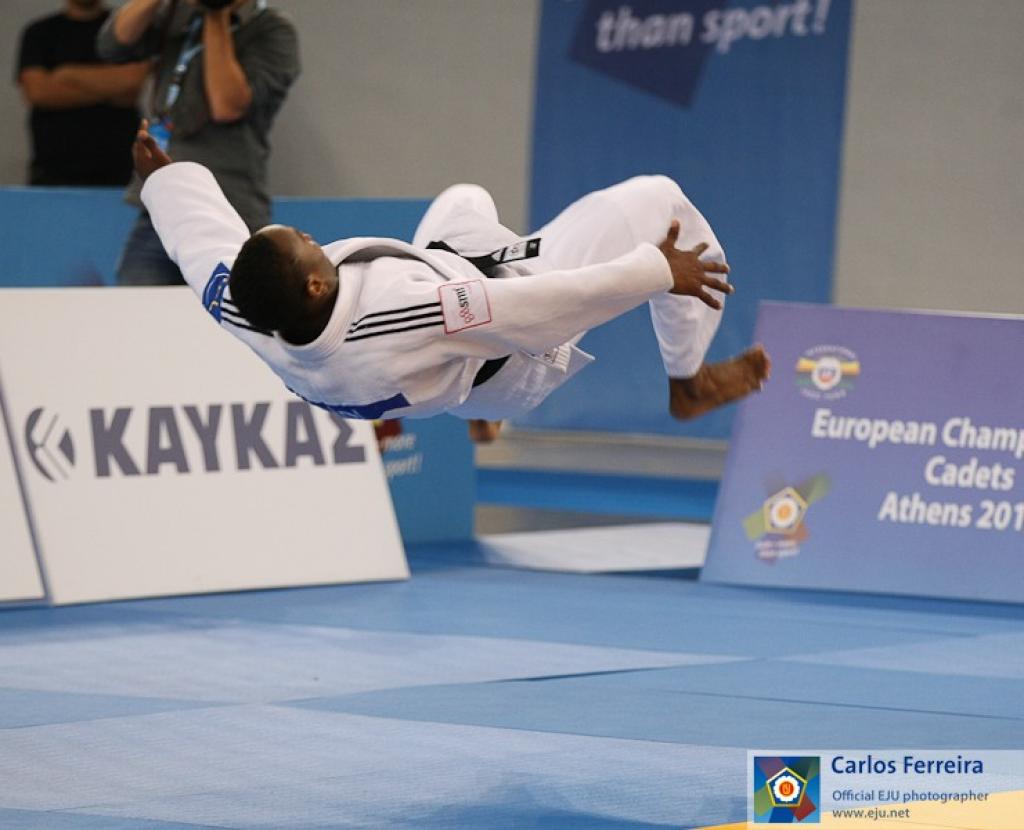 The first 2014 European Cadet Champions come from France, Russia, Azerbaijan, Turkey and Italy. After day one, France tops the medal table with two gold medals and one silver medal followed by Russia with one gold, one silver and two bronze medals.

Rustam Zabolotnyi (RUS) struck gold in the 50kg and the silver went to Temur Nozadze (GEO). The Russian looked confident in the final and scored waza-ari, then yuko and finally threw Nozadze for Ippon. “I am full of emotions right now and still shocked. I can’t believe yet that I won”, Zabolotnyi commented. “In the morning I fought well and I felt I can win today. The final was the toughest match. I already had three warnings, but I was able to turn the match around”, he continued. “When I walked into the venue, I felt the Olympic spirit. This is the place where Ilias Iliadis won Olympic gold. I also want to get that far”, Zabolotny added.

2013 Cadet World Champion Natig Gurbanli (AZE) completed a successful day by winning the gold in the final against Ayub Bliev (RUS). It was the Russian who marked the first score, a yuko, but a few seconds after that Gurbanli threw Bliev for waza-ari. Bliev earned another yuko, but he couldn’t catch up anymore.
“I have worked a lot and now finally I am also European Champion. I felt good today. The final was hard, I never fought Ayub Bliev before, but I was well prepared. Now I am going to the Youth Olympic Games and want to do well there”, Gurbanli said. Bliev, who competed in his first European Championships was somewhat disappointed. “I am a little sad that I lost in the final. I did not have enough physical strength. So I know what I have to work on for the future. My next plan is to compete at the junior level”, the Russian noted.

28 judoka competed in that category.

Bouda (FRA) dominates in -60kg
Romaric Bouda (FRA) continued his strong performances from the morning session to beat Ofek Shani (ISR) for the gold in the -60kg. The recently naturalized Frenchman achieved Ippon with 2.27 minutes to go. “I am very pleased with my performance. It was a good competition for me and I was well prepared. I knew I had strong opponents, but I told myself if you want to be the best, you have to beat the best. It was actually very motivating for me. Last year, I couldn’t compete, because I didn’t have French citizenship yet. I had citizenship of Burkina Faso”, Bouda explained.

“Ofek is disappointed. He felt good today and then he scored Ippon in the final that didn’t count and we don’t understand why. We want to come back next year and take the gold”, coach Ariel Zeevi said. “He wanted to get the gold for me, to close a circle”, the coach added. Zeevi had competed in Athens at the 2004 Olympic Games and won bronze in the -100kg.

Deleuil (FRA) not to be beaten in -40kg
Top seed Justine Deleuil (FRA) faced Lois Petit (BEL) in the final. The French judoka took the lead early into the match with a waza-ari. Petit almost caught her in the last minute, but Deleuil was able to get out of the hold and won the title.
“I was nervous today. The final was tough. I fought her (Petit) before, but each match with her is different”, Deleuil, who debuted at the European Cadet Championships, said. Coming to Athens meant a lot to her. “I know that this was the Olympic venue for 2004 and in fact I was watching at that time. I was seven years old and I already did judo”, she explained.
“Overall I am pleased with my performances today, I had worked a lot for that”, Petit shared. “I competed for the first time at this event and I have learned that you always have to push through until the end”, she continued.

Cicek Akyuz (TUR) claimed bronze, pinning Aida Bibkova (RUS) to the mat for Ippon. Marija Ivkovic (SRB) needed only a few seconds to take the other bronze over Natalia Kipshidze (GEO) as the Georgian suffered an injury.

The field in this category consisted of 12 judoka.

Number one seed Michela Fiorini (ITA) faced last year’s -40kg European Cadet Champion Leyla Aliyeva (AZE) in the final. In what was a close match with nobody scoring and being tied by two shidos, Fiorini right at the end was able to immobilize Aliyeva and achieved Ippon to win the title in her debut at the event. “I am very proud. Leyla Aliyeva is a very strong athlete. But I was training very hard, twice a day, which is not easy to combine with school.” The Italian as well felt inspired by competing in the Olympic venue. “Ilias Iliadis is my hero”, she pointed out.

Amber Gersjes (NED), who won gold in 2012 in the -40kg and bronze in 2013 finished off the podium this time as she lost in the repechage to Yvin.

Rabia Senyala (TUR), the defending silver medalist in this category, beat Blandine Pont (FRA) for the gold medal in the final of the -48kg. Senyala achieved Ippon at the end of the match by immobilizing her opponent. “I really want to thank my parents, my coaches and our Olympic Preparation Center with all coaches. I have trained very hard and I am now very excited”, the Turkish judoka said.
“I am a little frustrated, but on the other hand, if someone had told me that I will be European Vice Champion this morning, I wouldn’t have believed it”, Pont commented. “I learned a lot for my judo here and I am really motivated to come back next year and become European Champion”, she continued.

29 athletes competed in this category.

Overall 429 judoka from 43 countries are participating in the Championship that is held in the Judo venue of the 2004 Olympic Games in Athens. “I feel extremely happy to be present in Greece and especially in the stadium where the Olympic Games were held ten years ago. I also know that it’s of paramount importance to you Greeks because it’s here where you celebrated the feat of the gold medal by Ilias Iliadis. In this stadium the youth of judo have gathered, consisting of very important male and female athletes who indeed are in the process of qualifying for the Olympic Games of Rio. I am extremely satisfied with this event and I would like to thank the Hellenic Judo Federation for working hard to justify our confidence for the undertaking of these Games”, European Judo Union President Sergey Soloveychik said during the Opening Ceremony.

Deputy minister of Sports Ioannis Andrianos was present at the Opening Ceremony. “I would like to congratulate everyone who has worked in the preparation for this European event, taking place in the same stadium that the Olympic Games of 2004 were hosted and where we Greeks celebrated great successes like the gold medal of our own judoka Ilias Iliadis. I am particularly pleased because within these games we will have the chance to see firsthand the best young athletes and the biggest talent from all over Europe giving exciting fights. It’s therefore a big opportunity to attract young people to come in contact with this gentle and dynamic sport of Judo, which cultivates both physical strength and intelligence, as the Olympic ideal commands”, the deputy minister commented, who awarded the medals in the -40kg women cadets category.

The President of the Hellenic Judo Federation, Mr. Ioannis Kafentarakis, thanked the EJU for choosing Greece to host the event of the future Judo stars. “We are honored that the European Judo Union and personally their chairman, Mr. Sergey Soloveychik, entrusted us with such a great event. I believe that everyone who was involved in the process of accomplishing this task did their best for this to become the best European U18 Championship in history. We are confident that the excellent cooperation we have with the EJU will continue in the future.”