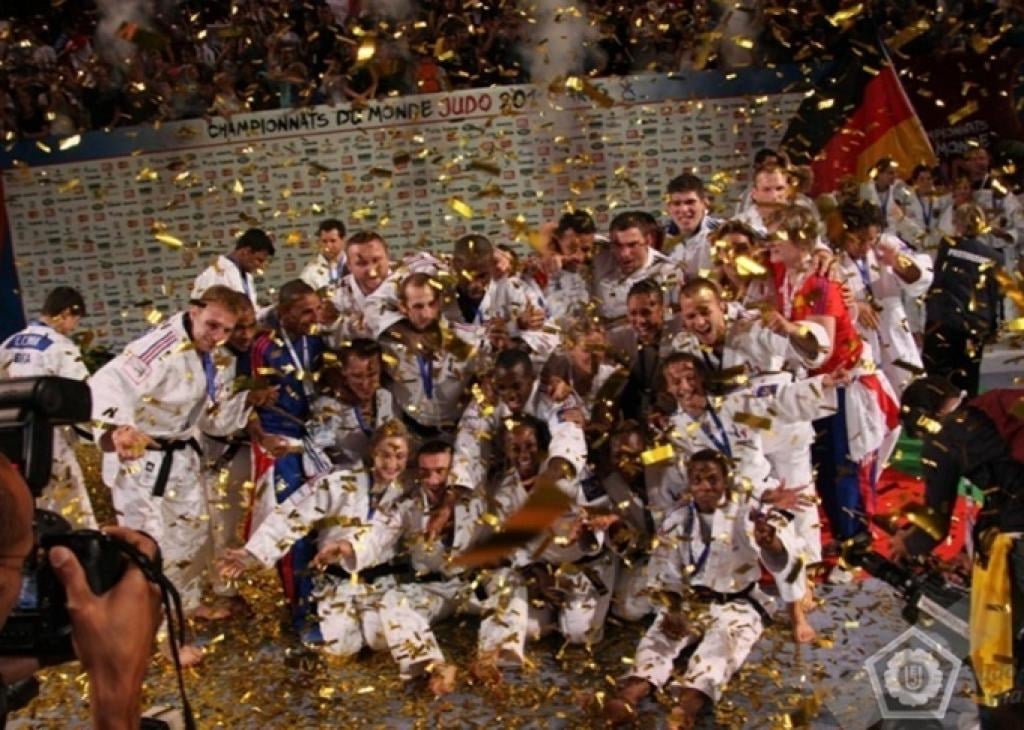 France, the hosts, ended the World Judo Championships in triumph on Sunday, when they won both the men’s and women’s team titles before a packed crowd at the Stade de Bercy in Paris.
They defeated Brazil 3-2 in the men’s final and Japan 4-1 in the women’s competition to give them a total of six gold medals and top the medal table for the first time in history since the championships were combined for both sexes. France had won four individual titles earlier in the six-day tournament.

As was fitting it was left to Teddy Riner, whose charisma and ability have dominated the championships, to end the event with a final victory. When he stepped onto the mat against Brazil to face Rafel Silva, the two countries were level at 2-2. Riner, as the winner of the heavyweight title here for a record fifth time, was expected to win quickly but the 23 year-old Silva, fifth in the 2010 World Championships, was obstructive.
He used his right arm to block the attacks of the Frenchman, who tried a variety of right-handed throws and occasionally Silva attempted a seionage (shoulder throw) himself. Although Riner was dominant, he was unable to get in a decisive throw and the bout when into extra-time for a ‘Golden Score’.
Then suddenly Riner produced the throw for which the spectators had been waiting, his favourite osotogari (major outer reaping throw) and dumped his opponent on his back for a yuko to settle the contest. The crowd would have liked an ippon but at least their hero had won and they erupted in their joy, most staying to sing the National Anthem, the Marseillaise, at the victory ceremony.

France had taken a 1-0 lead in the first bout when Dimitri Dragin defeated Leandro Cunha, who had won the silver medal in the individual competition. In the under 73 kgs class, Ugo Legrand, a bronze medallist here, beat the Brazilian Bruno Mendonca. This put France 2-0 ahead. The next contest, at under 81 kgs, was tense. Alain Schmitt had a long battle with Leandro Guilheiro, an individual silver medallist in 2010 and bronze medallist here. The bout went to Golden Score with Schmitt repeatedly trying seionage (shoulder throw) and Guilheiro also attacking. The Brazilian won on the flags 2-1 to narrow the gap.

Then in the under 90 kgs bout, Frenchman Romain Buffet was ahead until the last second of ordinary time, when, after leading with a yuko, he was knocked down by the Brazilian Tiago Camilo with kouchigari (minor inner sweep). Neither fighter was able to score in extra time and Camilo got the verdict from the officials. This then allowed Riner to have his final moment of triumph.

The women’s competition was much easier for France. Although they lost the first bout, when Priscilla Gneto was beaten on a penalty point (two shidos) by Misato Nakamura, recently crowned world under 52 kgs champion, their strength in the middle weights paid off. Automne Pavia upset the world champion, Aiko Sato, with haraigoshi (sweeping hip throw) for yuko and then Gevrise Emane, who won the under 63 kgs category here, defeated Yoshie Ueno,a repeat of the individual under 63 kgs final this week. Lucie Decosse, another French world champion, next scored with kosotogari (minor outer reaping throw) counter to give France an unassailable lead and France even won the heavyweights when Ketty Mathe scored a waza-ari for her left harai-goshi (sweeping hip throw) to beat the 2010 world champion Mika Sugimoto.
The bronze medals went to Germany, who beat South Korea 3-2, and Cuba, victorious over China 3-2.

Review all photos of the Team event here:
https://www.eju.net/media/?mode=showEvent&id=791

Read more about Teddy Riner at the IJF website:
http://www.intjudo.eu/News/cikk1971