France takes the triple at World Cup in Bucharest 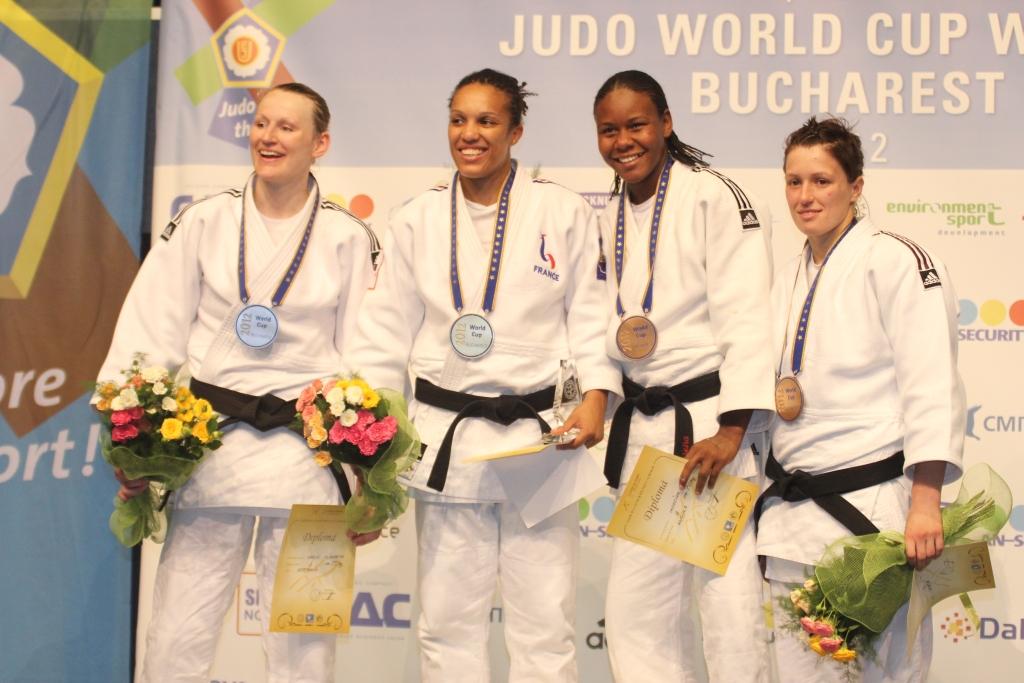 Lucie Decosse and Audrey Tcheumeo, here to pick up a gold medal. Not for the gold medal, not for the bonus, not for the points. An investment for experience, part of the learning curve in the road to London. Decosse was the first to win the gold medal. In her category U70kg which she dominates she defeated Elisabeth Greve of Germany. Good performance of Greve to stand Decosse for the full five minutes.

Greve is not Germany’s first choice. Iljana Marzok qualified for the Games in this category and new talents are booming but Greve performed well and defeated Kristina Marijanovic (CRO) in the quarter final. She won bronze after all as well as Antonia De Fatima Moreira who won the first ever World Cup medal for her country Angola, not just luck, with convincing judo and good scores.

Decosse: “I didn’t go to Chelyabinsk, instead I chose to train with the boys in Paris and I had a very good week instead of travelling abroad to Chelyabinsk fighting against Bosch and Meszaros, all those women that I know well and pumping up myself. Here in Bucharest I can fight against new girls and see where I still have troubles. I was tired after the matches, so that’s good and my coach Larbi Benboudaoud gave me some instructions, so it was worth while. It is not deliberate that I won’t fight my major rivals for the Olympic gold medal, it was planned only to fight at the Masters and Tournoi de Paris, and then go to Bucharest.”

Audrey Tcheumeo was the second to win gold for France and the third this weekend after Automne Pavia won gold on Saturday U57kg. Tcheumeo was not good enough yet, not necessary and learning and improving, finetuning the shape towards London. It was the last chance for the French, a planned trip to Bucharest.

Tcheumeo defeated Gemma Gibbons of Great Britain in the final taking the full five minutes, so also Tcheumeo made her minutes, also not in the right shape, but in course for London. A moral gold motivation for the French. Great Britain won two medals in this category U78kg by Gibbons and Natalie Powell. Ivana Maranic won the second medal for Croatia defeating Lena Buseman of The Netherlands.

In the plus category Giovanna Blanco of Venezuela was the best. She celebrated the world cup victory like the world title, and it was worth while as it was her first ever medal in Europe at a major tournament. Gold for the only pan American participant, also a 100% score.
Blanco was stronger in the final against Algerian Sonia Asselah. Larissa Ceric (BIH) and Andreea Panea (ROU) both won bronze.

Watch all pictures later and review the results here:
https://www.eju.net/results/?mode=showResult&id=1049