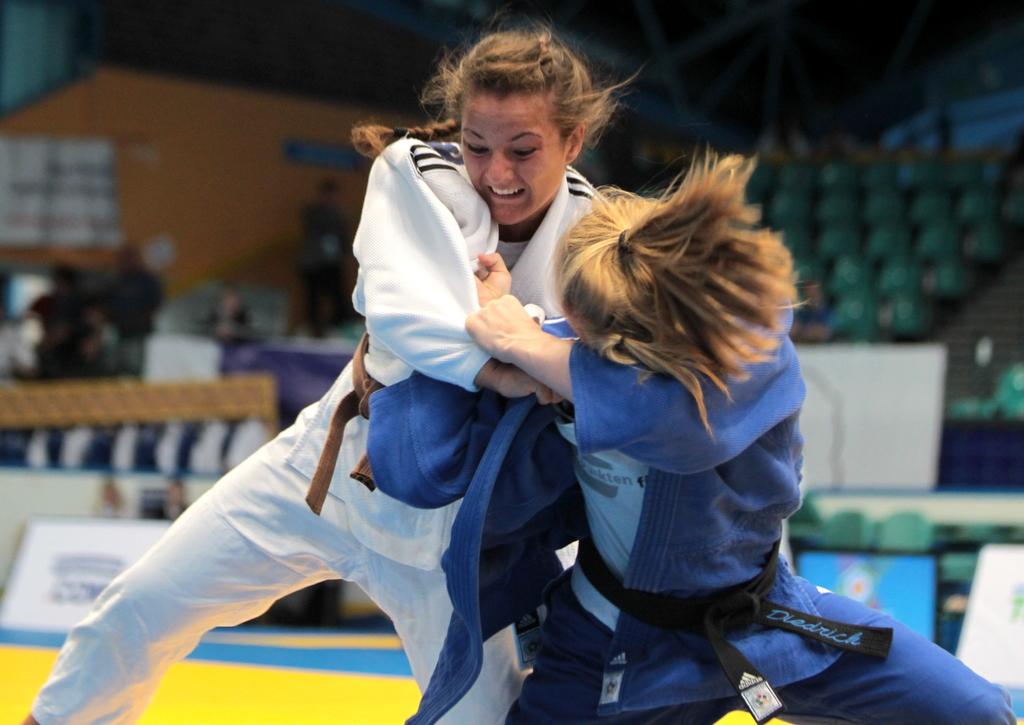 253 Participants travelled to the west of Poland where Wroclaw is the host city for the European Cup for Juniors. What was before the European Cup of Cetniewo is now organized in Wroclaw, also host of the European Football Championships last June, so excellent facilities with a new airport. Today it was all about judo and the French equipe understood as best team. They collected three out of eight gold medals. Germany did well with six medal in total but lost four medals.

Michal Bartusik won Poland’s second bronze medal in the men’s U66kg class, won by Anthony Zingg in the final against Kazach Yermekbay. Kazachstan won 5 medals in total today all in the men’s division.
As mentioned France was strong in the women’s tournament and took gold by Margaux Pinot U63kg against Nadja Bazynski (GER) and Malonga won gold U78kg.

In the women’s U70kg usually the medals are ready for Barbara Matic from Croatia (pictured). It was not different this time. The oldest Matic who’s sister recently took the U17 European title defeated Szaundra Diedrich from Germany and seems to be candidate number one to take the European title for juniors in her onw country in September when the best judoka come together in Porec. The Matic sisters won 4 gold medals this year in the European Cup circuit.

Yelyzaveta Kalanina won the plus 78 category, not surprising, Kalanina is the winner of the European Youth festival U17 (EYOF) last year and runner up of the World U17 Championships, and was today’s youngest winner aged 17. In the final she defeated German Clarissa Taube which was the fourth silver medal for the German young women. Alexandra Babintceva claimed the bronze with Anne M’Bairo from France.

In the men’s category Azerbaijan started well with a victory of Mekhman Sadigov, the 2009 European Cadet Champion. He defeated Adrien Quertinmont of Belgium. Robin Corrado won gold for France U60kg . France won 15 gold medals so far in the 12 Junior European Cups this year. Russia 19 as the weightclass U73kg was won by Pavel Matveev. He defeated Mathieu Little from France in the final and won all his six fights. Kairat Agibayev (KAZ) won a bronze medal and joined the stage with Sami Chouchi from Belgium.

Wroclaw was host of the 2002 European Senior Championships and the city is ambitious for years. EJU Sports Director Pavel Yasenovski was happy with the new European Cup: “This is the best European Cup: very good communication, accreditation procedure, spacious sports hall, warm up hall and hotel. The total organisation is great. It is also a very strong Cup. The city of Wroclaw has atmosphere. This is nice beautiful city with traditions” referring to the European Championships of ten years ago.

The European Cup is followed by an EJU Training Camp for juniors.

President of the Polish Judo Association Wiesław Błach and Pavel Yasenovski visited the hospital where Tomasz Kowalski is recovering from a motor accident in May. The Polish talent was qualified for the Games but due to the accident Pawel Zagrodnik is reprenting Poland U66kg.

Watch photos in our media gallery and review the results here: