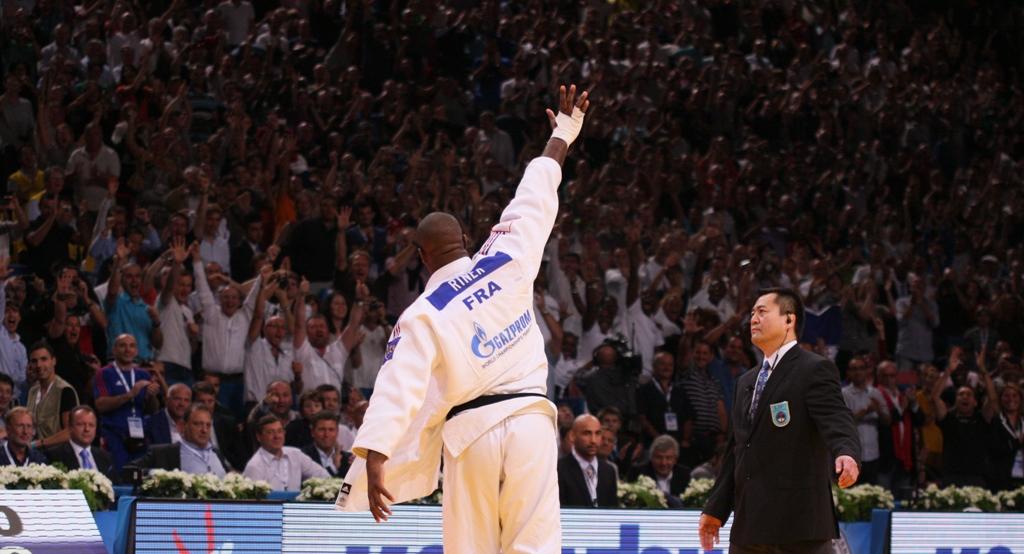 The Russians with no doubt presented a powerful team in Lisbon, but on the second day only one got the gold. France was leading the medal tally at the second day with strong Olympic medal prospects for Teddy Riner who claimed the gold at the adidas World Cup and an important victory for Alain Schmitt.

At the 81kg division Sirazhudin MAGOMEDOV (RUS) had a good start, but on the second fight he got injured, but he kept going into the final. There he found Alain SCHMITT as opponent who during the day had some long fights. The semi-final with the Belgian Joachim BOTTIEAU, decided with a Seio-Nage, Ippon in the golden score.

The final started with 2 Shidos, one for each fighter, after some grip fighting and no action. SCHMITT had another Shido after a while and MAGOMEDOV took the lead. Although with clear signs of his injured knee, and only with 30 seconds to go when SCHMITT scored Yuko with a Seio-Nage and the fight went into the golden score. May be too much of fair play from the French and a powerful psychological strength from the Russian to keep on fighting, the gold medal went to the French Alain SCHMITT, after the second Shido given to MAGOMEDOV, with only 32 seconds to the end of the golden score.

The first bronze medal went to the British Thomas DAVIS. The day had started very well with an amazing and explosive Koshi-Guruma against the Czech David KLAMMERT, and ended against the Finnish Antti VIRTA, with a Te-Guruma, Wazari scored.
The other bronze medal fight was very disputed. The Spanish Adrian NACIMIENTO LORENZO who won the adidas World Cup in Madrid last week, was looking for another medal, but this time the Belgian Joachim BOTTIEAU took it, 3-0 after 8 minutes fighting and no score on the board.

At the -90kg category no clear favourites. This year’s Baku Grand Prix winner from Russia Yuri PANASENKOV, lost in the quarter-finals against the fresh and young Ukrainian Stanislav RETYNSKYY, bronze medal last year in the U20 World Championship. He lost in the semi-finals against the Portuguese Tiago RODRIGUES.
The -90kg final was between two young fighters, and the youngest took the gold. After great fights the Portuguese crowd wanted the gold to the Portuguese Tiago RODRIGUES, but, with only 20 years old, the Serbian Alexandar KUKOLJ surprised everyone when in less than a minute, scored Ippon with an amazing Ko-Soto-Gake. But KUKOLJ is in a good shape motivated by the competition in his own nations with three strong fighters in this category.

The first bronze medal went to the Ukrainian Quedjau NHABALI, Stanislav RETYNSKYY got injured in the semi-final and did not fight with his compatriot.
The other bronze medal went to the Russian Iurii PANASENKOV. After some problems with the atypical judo from the Portuguese Hugo SILVA, PANASENKOV scored Ippon with a left Harai-Goshi.
The first semi-final U100kg, between the Russian Sergei SAMOILOVICH and the Austrian Julian REICHSTEIN, ended with a Juji-Gatame, the second from the Russian.
In the other semi-final, as predicted, the Ukrainian Dmytro LUCHYN surprised the experienced Elco van der GEEST in the semi-final.
In the final the crowd was expecting to see more Ukrainian Sumi-Gaeshi, but the Russian Sergei SAMOILOVICH had another idea for this final. After a good dispute the Russian scored Ippon with a great Ashi-Waza technique. In his own nation he is the second choise despite his convincing third place at the World Ranking, even higher than World Champion KHAIBULAEV (6).

Vadims LANDO (LAT) started the dispute for the bronze medal with a Yuko score but Julian REICHSTEIN (AUT) answered quickly, he started with an O-Soto-Gari but changed it to an amazing Te-Guruma, Ippon scored.
The other bronze medal went to Elco van der GEEST (BEL) after one-hand Tai-Otoshi and an O-Soto, scoring Yuko both times, against the Ukrainian Dmytro BEREZHNYI.

Not surpringly French Teddy RINER won the +100kg category. In his semi-final, RINER scored Ippon in less than 20 seconds with an O-Uchi-Gari.
The other semi-final was between the Slovenian Matjaz CERAJ and the 175kg Peruvian Carlos ZEGARRA. But the Slovenian knew what he was doing when scored the second Wazari with a drop knee Seio-Nage.

When someone is winning a final with 5 seconds left on the clock, what is the most likely scenery? Wait for the other? Not with Teddy RINER. Winning by Wazari, RINER ran to the Slovenian Matjaz CERAJ, in time to score another Wazari with an Uchi-Mata and captured the crowd and the gold medal.

One of the bronze medals went to the Israelian Or SASSON, who certainly saw what CERAJ had done to the 175kg Peruvian, and after some attempts, scored Ippon with another drop Seio-Nage.
The Second bronze medal went to the Belgium Benjamin HARMEGNIES. The Belgium first scored Wazari with a great O-Goshi, and then the Portuguese António COSTA got his third Shido.

Portuguese Top star Telma Monteiro was awarded with the Merith Order from the Portuguese Government, a great acknowledment given only to portuguese people who have achieved great success in their areas of expertise.
She received this award from the hands of the President of the Portuguese Republic – Mr. Aníbal Cavaco Silva as part of the commemorations the “Portugal, Camões and Portuguese Communities Day” which is celebrated every 10th of June.
Monteiro received a standing ovation for this great award.

The event was attended by the Head of the Portuguese Olympic Mission of the London Games Mário Santos on Saturday. On Sunday the Mayor of Odivelas Susana Amador and the Odivelas Sports Councilor Hugo Martins were present as well as Olympic Medallist and 2012 Deputy Chef de Mission Nuno Delgado. PJF Honorary President António Lopes Aleixo and the PJF President Carlos Andrade and Board witnessed a great event and the award for Monteiro.

Watch all photos here in our media gallery: