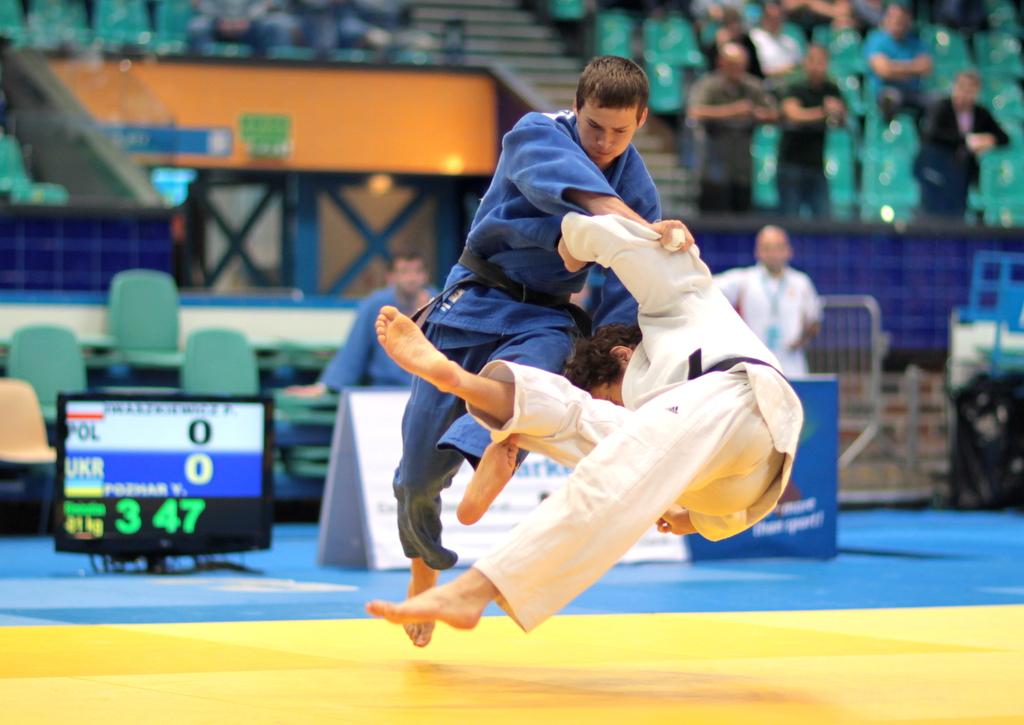 What didn’t succeed on Saturday was the success of Sunday, the German team added three gold medals to the four silver medals of Saturday and was represented in four finals on Sunday. However the French team continued Saturday’s success and won five gold medals in total.

Youngster Amandine Buchard was kind of expected in the women’s U48kg, despite her 16 years. The French girl is strong this season and won the French title U20 and the European Cup in Leibnitz (AUT). She was the youngest winner this weekend and today she defeated Anna Dmitrieva (RUS) in the final. Nieke Nordmeyer (GER) and Anna Pashina (RUS) claimed a bronze medal. Russia was successful U44kg where Irina Dolgova won gold against her compatriot Anastasia Pavlenko. Noelle Grandjean was the youngest medallist of the day from France. She won bronze as well as Alessa Sommer (GER).

Germany won gold on Sunday by the wins of Sappho Coban U52kg and Alexandra Zwirner U57kg. Coban defeated her compatriot Theresa Stoll in the final. Zwirner was victorious over Darya Mezhetskaya of Russia. Rebecca Brauniger won a bronze medal for Germany. Polish Arleta Podolak took bronze as well. U52 the homecrowd could cheer for Karolina Pienkowska.

The second gold medal for France was claimed by Nabil Machtrou in the men’s U100kg. Machtrou was stronger than Marius Piepke from Germany. Jakub Zakrzewski from Poland won bronze.
Slovakia’s Filip Stancel won a gold medal in the men’s U81kg. It was the first time this year that a Slovakian talent won the European Cup for Juniors.

Samat Yessen of Kazachstan took the gold U90kg defeating this weekend’s only Polish finallist Patryk Ciechomski. It was a good day for Slovakia anyway as Arpad Szakacs won bronze in this category.
Andriy Kolesnyk won gold for the Ukraine in the last final. Patryk Broniec (POL) won bronze.

France leads the medal tally of the first European Cup in Wroclaw. The representatives of the EJU were satisfied, not only sports director Pavel Yasenovski but also referee secretary Bernd Achilles who was very enthousiastic about Polish referee Krystyna Macioszczyk. 1996 Olympic Champion Pawel Nastula was present as well and liked this location as well, close to the renewed airport and with a great environment.
Good news for Poland and the public was the presence of the opposed Olympian Tomasz Kowalski who could visit the tournament, coming out of the hospital for the first time. Although heavy injured after a motor accident, he is aiming to recover in one year. Kowalski was visited this weekend by EJU Sports Director Yasenovski, Polish Judo President Wieslaw Blach and was called by EJU President Sergey Soloveychik to support the recovery of polish proud.
Kowalski was in hospital for two months. He feels good with a stabilizer on the cube.

Find the pictures of the European Cup in our media gallery where you can review all results as well.