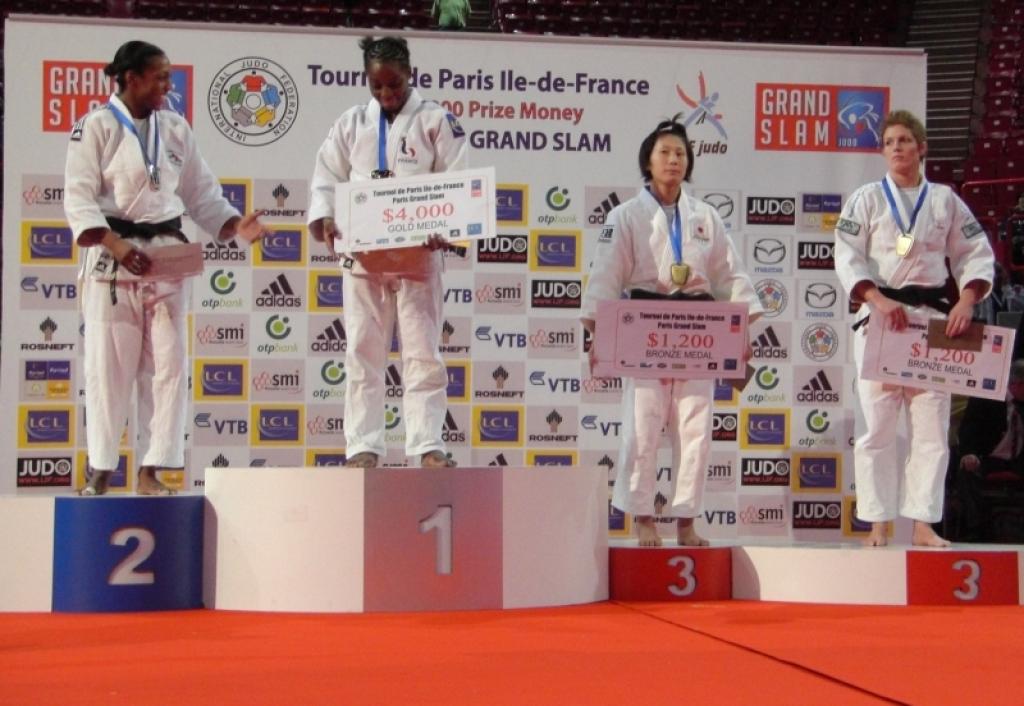 The evening in Paris ended up well for France, when former world champion Gevrise Emane (FRA) had to fight Anicka Van Emden (NED) in the final U63 kilogram. A nice last match after Japan had won all women’s finals.
The final was decided rapidly when Emane executed a shoulder throw and scored an ippon on home soil. Emane won the Tournoi de Paris in 2008 U70kg but now was grateful to the crowd for winning a second title.
Emane had beaten another Dutch, World Championships runner-up Elisabeth Willeboordse, in the semi final while Van Emden defeated world champion Yoshie Ueno after a serious backdraft in the semi.

The final U48kg was the same as last year. Too bad for French Frédérique Jossinet as she again lost to Emi Yamagishi (JPN). Jossinet lost the final for the third time in a row, and for the sixth time in her career, which is an overall TIVP record. On the other hand, she also won the 12th medal at the Tournoi de Paris, which is a more positive record which she now owns by herself. Last year she had to share this position with Isabel Fernandez (ESP).
Jossinet was the only European representative of Europe at the podium.

U52kg World Champion Misato Nakamura (JPN) defeated Spain’s bronze medalist at the World Championships Ana Carrascosa. For the Spaniard an improvement of her 5th place of last year. 32-year old Ilse Heylen can still match her ‘man’ as she finished third today after a fine performance beating European Champion Natalia Kuzyutina (RUS) in the quarter final who had to give a lot in previous match against World Junior Champion Majlinda Kelmendi from Kosovo, who was fighting on invitation of the IJF. This was also last week’s final at the World Cup in Sofia.

U57kg the final between World Champion Morgane Ribout (FRA) and Kaori Matsumoto was a repetition of the line up of the semi final at the World Championships. Ribout was dominant from the beginning and showed great judo today with a superb ippon in the semi final against Nae Udaka (JPN).
But during the final match Matsumoto got more grip and finished the match unexpected on the ground with an arm lock. Matsumoto won the gold in Paris, where she won bronze last year. But in 2010 the Japanese light middleweight also won the IJF Masters in Suwon.
Hungarian Hedvig Karakas took the bronze medal jointly with Udaka.

In the men’s category U60kg David Asumbani of Georgia is in great shape. Today he defeated Rishod Sobirov (UZB) in the final, while last week Asumbani won the World Cup in Tbilisi.

U66kg Kim Joo-Jin (KOR) defeated Miyaragchaa Sanjaasuren (MGL) in the final. The match was a good appetizer for double world champion Wang Ki-Chun who saw his fellow countryman winning against Sanjaasuren. Kim decided the match in the last 20 seconds.

Wang Ki-Chun and Hiroyuki Akimoto (JPN) fought the final U73kg at the packed stands of the Bercy Sports Hall. World Champion Wang is always a joy to watch, but it wasn’t as easy as it seemed to be. Akimoto, last week’s bronze medalist at the World Cup in Baku was a tough competitor for the experienced Wang who won the Tournoi de Paris last year. The match was not decided in regular time, but Wang didn’t need the full 3 minutes in the Golden Score. He scored a waza-ari after 30 seconds winning his fifth consecutive Grand Slam where he participated (Tokyo 2008, Paris 2009, Moscow 2009, Tokyo 2009 and Paris 2010). Let’s forget about his loss against Yasuhiro Awano at the Masters three weeks ago.