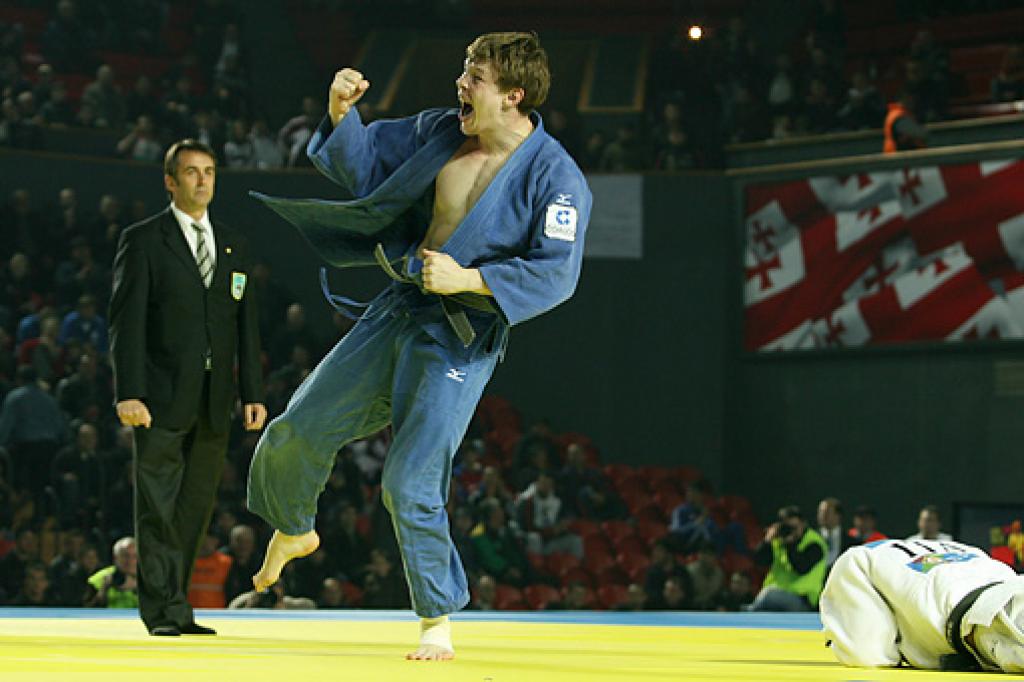 At the second day of the IJF Grand Slam in Rio de Janeiro European Champion Ivan Nifontov (RUS) (in the picture) was the best in the U81kg weight class. Nifontov beat Brazilian youngster Nacif Elias in the final. Nifontov beat former Olympic medalist Flavio Canto amongst others.

U90
Kirill Denisov (RUS) won the U90kg weight class. In the final he defeated Hugo Pessanha (BRA) who won the Tre Torri Tournament in Corridonia in June. Denisov (21 years) beat Tiago Camilo (BRA), the Olympic medalist under 81kg who successfully fights one category higher. Camilo also finished third at the Grand Slam in Moscow in May.

U100
Elco van der Geest (NED), former European champion and younger brother of the retired Dennis van der Geest, took the fast train since he won the Swiss Open in April. Since than he didn’t lose and won the IJF Grand Prix of Tunis and now beat world champion Luciano Correa in his own country at the Grand Slam in Rio.
Although Elco van der Geest didn’t qualify for the world championships due to competition of Olympic bronze medalist Henk Grol, he may opt to participate U100kg for an other country. In this shape he would be good for a medal at the world championships although he more modest himself.

O100
In the heavyweight category there was a quality participantslist with former world champions like Tamerlan Tmenov (RUS), Alexandr Mikhailine (RUS) and Yasuyuki Muneta (JPN). But none of them reached the final. Daniel Andrey Hernandes from Brazil beat Hiroki Tachiyama (JPN) in the final. Pierre Robin was the only European to reach the semi final.

U70
In the women’s category U70kg Lucie Decosse is one of the major favourites for the world title. The 4-times European champion is again dominant in this new category. In the final she defeated former Kerstin Thiele (GER). Decosse beat Thiele previously in the semi in Paris this year.
Thiele took revenge for previous losses to former world champion Edith Bosch (NED) in the semi final.

U78
The most strong French judokas fought each other in the U78kg category final. The reborn Céline Lebrun (32 years) and Stéphanie Possamai (28 years) are fighting for qualification for the worlds, but Lebrun again made clear that she is still at top level. Lebrun scored a yuko and defeated Possamai in the final.
Former European Champion Heide Wollert (GER) finished third in a very strong field of participants.

O78
Carola Uilenhoed (NED) beat Franziska Konitz (GER) in the semi final, but couldn’t win the final O78kg against Mika Sugimoto (JPN). Nonetheless a good result for Uilenhoed, 6 weeks before the World Championships in her own country and coming back from a serious knee injury.
Sugimoto finally ended her streak of 4 lost finals since December 2008.

If you want to read the review of day one, click at the link below.