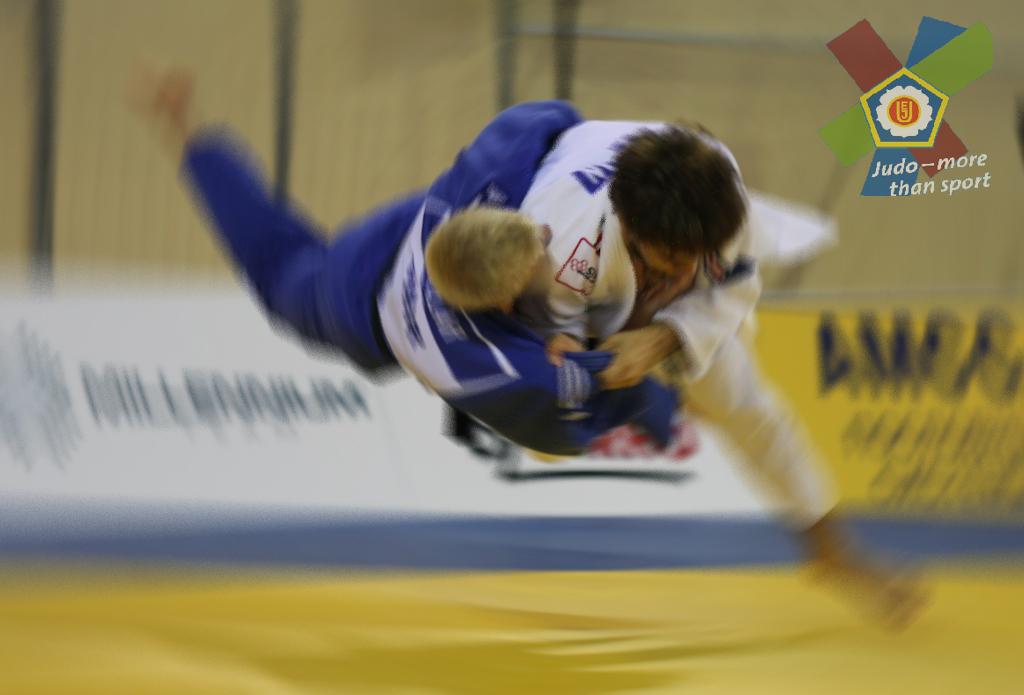 France hit the jackpot at the European Cup for Seniors in Belgrade. The French men won all three categories at the first day of fighting in the Serbian capital. In the women’s division four different nations won the gold medals.

In the men’s lightweight category Sylvain Goulet stepped on the highest stage of the podium after his victory in the final against Serbian Denis Jurakic. Despite the support of the home ground it was the Frenchman who claimed the victory. Goulet won five matches, in the semi final he beat Croatian Bernard Azinovic. Both semi finallists lost their bouts for bronze against two other French: Vincent Limare and Kamel Mohamedi. For Goulet it was his first European Cup victory ever. Last year he only won the Swiss Open. In the men’s U66kg Adrien Bourguignon won the gold, just like he did at the British Open in May. This time the 22-year old Frenchman beat Bar Raufman in the final. Nikola Gusic took bronze and showed that Montenegro is again mingling in the final stage in the seniors. Gabor Hagyo won bronze for Hungary. Arthur Clerget was a great talent in his junior period, he took a fifth place at the World Championships in 2011 in Cape Town and now seems to make the connection with the seniors. He build up his season well with 5th place in London’s European Cup, 3rd in Celje Podčetrtek and now taking the gold in Belgrade. In the final he beat Mitar Mrdic of Bosnia Herzegovina. Jovan Mirkovic won bronze for the home nation Serbia and Norbert Kiss took the second medal for Hungary. Ioana Matei won gold in the lightweight women U48kg, the Romanian won gold after the bronze of last year. It meant her first gold ever in a European Cup. Valentina Schauer won silver, she grows more and more to a senior level with better performances at this level events. Sappho Coban was the only participant for Germany in Belgrade, but she won the gold. Germany’s super talent was last year’s European Junior Champion and the 18-year old is now getting in shape for the World Championships in Ljubljana. In the final she defeated Hungarian Daniella Balogh, her best performance for the former U23 Hungarian Champion. Anna Dengg (AUT) won bronze as well as Chloe Jackson (GBR). Ivelina Ilieva of Bulgaria goes on and on. The collector of European and World class medals now took the gold in the European Cup in Belgrade U57kg. Each year The Bulgarian Senior Champion takes a European Cup, but Belgarde was her second time, earlier in 2011. In the final she was too strong for Andrea Bekic of Croatia, the winner of the European Cup in Bratislava in September. Viktoria Majorosova of Slovakia won bronze as well as Narges Mohseni (AUT) Majorosova’s compatriot Ivana Komlosiova won gold in the women’s U63kg class. Komlosiova defeated Valentina Giorgis for her first international victory. It was quite a historical medal for Slovakia. The last time that a woman won an international high level senior tournament was in 1993 (Karin Hefkova). In between only the Slovak men were successful. Marijana Nikoljevic won bronze for Serbia as well as Tereza Patockova who won the second international medal for Czech women this year. Eva Koubkova won silver in September in Bratislava.