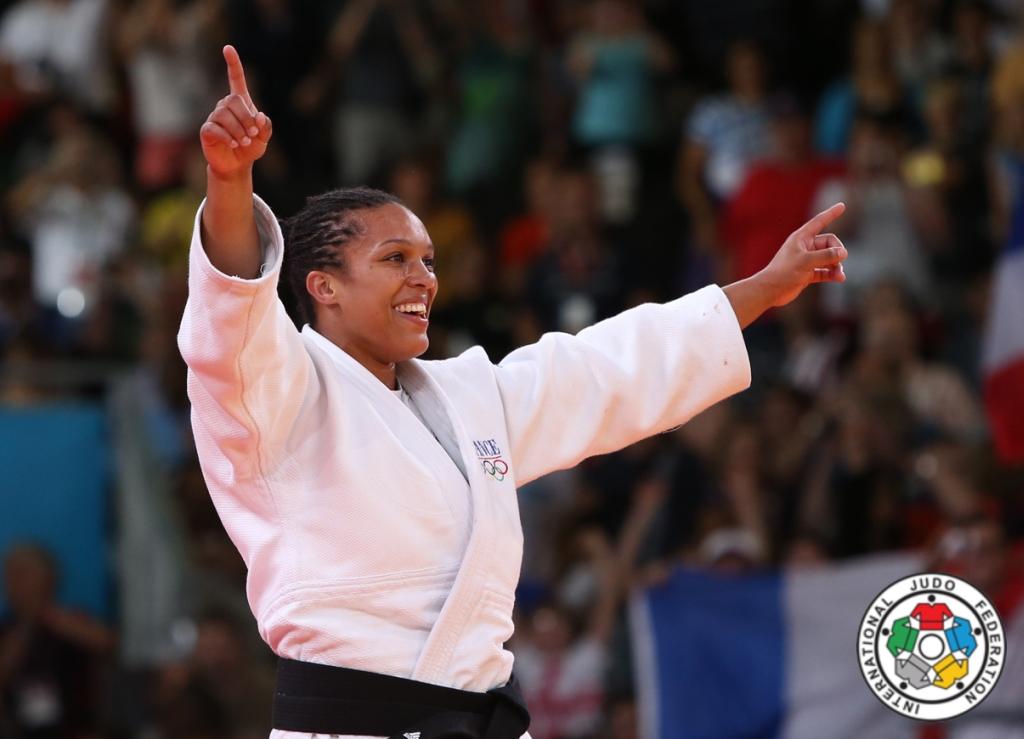 Gneto
On Monday 29 July the first medal was captured by Priscilla Gneto. The youngest medallist of the seven. Gneto was an outsider for a medal. She gave herself a great present for her 21st birthday some days later: “I’m very happy, I wasn’t expecting a medal although I came here with the intention to try and win gold. I’m now going to have a great celebration on having bronze.”

Legrand
On Tuesday the French collected even two medals and pleased the new elected President Francois Hollande. He visited the judo event to see two French fighting for a bronze medal and both succeeded.
Ugo Legrand came back in the repechage and could fight for bronze against Wang Ki-Chun (KOR).
“This Olympic medal is something I have dreamed of since I was little. I am very excited about my medal. I wanted the gold of course.”
“I had to fight hard for the bronze. In the fight I told myself this is the last match and I can not lose it. I gave everything I had. I did not expect that so many French fans would be here. But France is very close and they all came to support me. It was great.”
“I did not know that our President was here at first. I only knew that the minister was here. The president told me that he was very nervous for me and that he was trembling during the match. He said that he is very pleased that I was able to earn this medal for France.”

Pavia
Not only Legrand but also Automne Pavia caught the attention of the minister. The tall French won bronze. “It is like a gift for the last four years. I have worked so hard and put in a lot of effort. It took me a long time to get to a professional level, and today I have so many people here for me. The support was very special.”
What did Francois Hollande say to her: “First I have to say that I was happy that he was in the judo venue on my day of competition. He said to me that he was a bit disappointed after the semifinal against Matsumoto, but he also expressed his happiness with the medal I won.”
The three medallists enjoyed the quite environment of the Olympic village to recover from their efforts and enjoyed to be with their family.

Emane
At day four world champion Gevrise Emane had the tough assignment to deal with the expectations. Emane did capture bronze after Zolnir’s spectacular win U63kg. “It’s true that it was a tough day. I was under a lot of pressure for these Games. I wasn’t at my best for these Games. You need to overcome the pressure and you need to find a way to do this, but in judo you don’t have much time. But I’m extremely proud of my bronze and I feel I’ve worked hard for it.”

Decosse
At day five of the Games Lucie Decosse was an even bigger favourite than Emane, but would she stand the pressure? She did and dominated the women U70kg category, maybe not with exciting judo but with calculated dominance. Tough when she needed, balanced when she was in the lead.
“I don’t think I felt any pressure because I knew I had to give everything and I knew if I was aggressive in all my bouts, I would go to the end, which was Olympic gold. When I came here this morning I thought ‘I have trained hard to get where I am now’.”
“My greatest fear was having to fight Yuri Alvear(COL) who is the only one who has made me fall in the past two years. Also I didn’t want to fight either Bosch or Tachimoto. In the final When I fought against Kerstin Thiele (GER) I was very focused. I saw she was emotional and cried when she won her semifinal. She was just happy to have made it to the final. I thought I would take advantage of that emotion and I did, and I won.”
After the final , she crashed into emotions herself after working so hard for four years, but already recovered on the tatami with all the cheers from the many French on the stands. Now it was gold instead of the silver of Beijing.

Tcheumeo
Another World Champion of Paris was under high pressure although Audrey Tcheumeo faced quite some opposition with strong women from all continents. The strong French won bronze afterall and was disappointed not taking the gold but also extremely happy and proud to have bronze.
“My mother and family supported me after my loss in the semi final. I have done judo for 16 years, it’s still a huge victory for me I am part of this strong team. I believe we showed the new image of our girls who are strong physically and mentally.”

Riner
At the last day of the judo tournament the French waited for its apotheosis, teddy’s day. An huge pressure for Teddy Riner who already won five World titles aged 23. Riner won the gold medal in the final against Alexander Mikhailin (RUS). Riner, also outside of judo he is very famous but he could deal with the pressure very well he commented in the press conference.
“I can tell you that my coach Benoit Campargue gave us all the tools that are necessary to prepare. For the last four years, it was particularly difficult when it comes to waiting. The work has been done, it has been difficult, but it’s been done. But I wasn’t so nervous and tried to see it as a normal tournament, still you have to win.”
“I just decided to remain aggressive and try to catch my opponent as quickly as possible. It’s true there was no ippon or no big technique, but I realised that the Olympic Games are different to world championships or any other competitions. All the opponents are ready to do anything.”

For France it was a tremendous success with 7 medals, 3 more than in 2008 where two finals were lost. France is back after the dip of 2004 taking only one medal. Great news for Europe that took 29 medals in total these Olympics. France contributed with almost 25%. Félicitations!