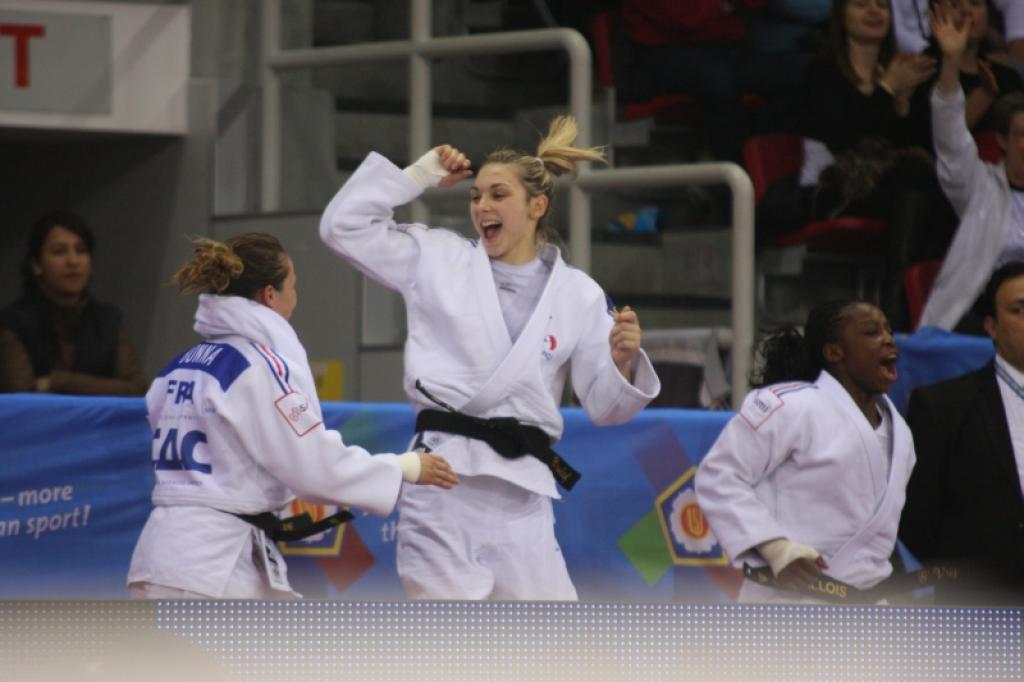 The team event can be so fantastic. The women’s final at the European Championships in Istanbul was sensational. The energy it generates is uncomparble to the individual championship. In today’s final Germany and France fought eachother.

European Champion Penelope Bonna had a tough fight against Romy Tarangul who scored an essential point for Germany as first fighter. Tatangul lost the bronze medal fight in her indivual championship U52kg while Bonna took the title defeating Taraungul in the final. So tarangul was eager to win this match knowing that other strong fighters from France were waiting. But Tarangul succeeded to take revenge for her loss on Thursday.
Germany has lost the World Team Championships last year in Antalya and without winner The Netherlands they had great expectations for the European Championships.

The second fight between Vila Waechter (GER) and Automne Pavia was the draw for France. Pavia defeated Waechter with a great score for ippon and scored the equaliser.

European Champion U63kg Gevrise Emane made the difference against Claudia Malzahn and gave France the lead.
Iljana Marzok and World Champion Lucie Decosse made it to a thriller. Both fighters didn’t score in the regular time although they were close. In the golden score it was Decosse who made the difference after 20 seconds and gave France the victory of the German team. A good revenge for her European Championships were everybody expected gold for Decosse but was awarded with bronze.

Luise Malzahn who fights U78kg was the opponent of Anne Sophie Mondiere, fortunately for Malzahn the lightest heavyweight of the individual tournament. The results wasn’t relevant anymore but it still catched the attention of the crowd. For the record: Malzahn decided the match in the golden score, resulting in a respectable 3-2 for France.
An exiting end of a great day in the women’s tournament.
France reconcurred the European title they won for the last time in 2008.

Bronze: First bronze was for the home team of Turkey. They were better against the experienced Russian team and repeated a sensational medal at a team event, just like at the world team championships in Antalya last year. The home crowd supported the team very well and created a sensational athmosphere.
The second bronze medal is going to the Ukraine. The Ukrainian women defeated Spain. The Spanish women competed with four instead of five judoka.