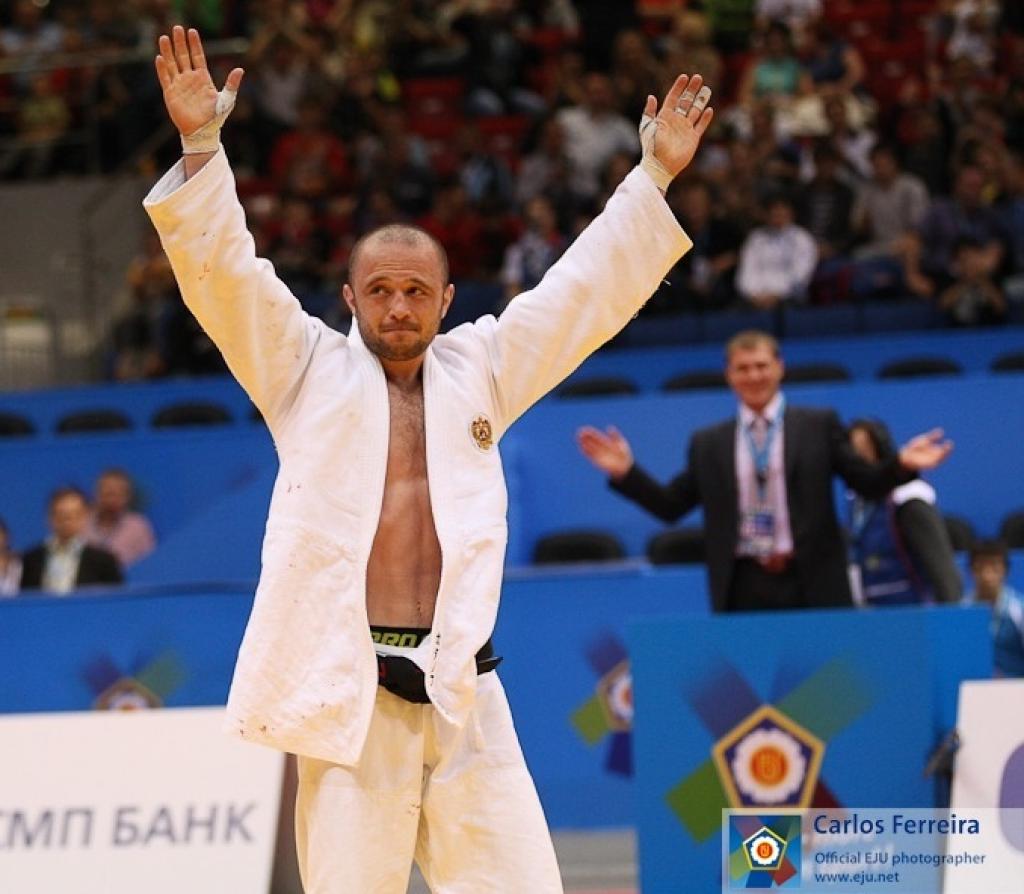 In the men’s division the Russian athletes were motivated by the crowd Alim Gadanov finished his final match against Tomas Kowalski with a lovely smile for the cameras. Gadanov is Russia’s number two, but only in points. Both Gadanov as Musa Mogushkov are determined to win a medal at the Olympic Games and in fact share the top position at the World Ranking list even before the competition coming from Mongolia, Japan, Brazil and Korea.

Gadanov defeated Polish Tomasz Kowalski in the final, the number fifteen of the World Ranking.
Gadanov had quite a good draw and defeated Dan Fasie (ROU), Nijat Shikhalizada (AZE), Lasha Shavdatuashvili (GEO) and finally Miki Ungvari in the semi final. Tomasz Kowalski had a great day. He won the silver medal and defeated tough opponents such as Rok Draksic (SLO) in the quarter final and David Larose (FRA) in the semi final. He didn’t give Larose a chance in the semi and qualified rather easy for his final bout against the powerful Gadanov, the number five of the 2008 Olympic Games. Gadanov hasn’t won a medal at World Championships yet but won his fourth European Championships medal. After three times bronze in 2008, 2009 and 2011 he now claimed the title. He was one of the favourites in advance, at home and with the Grand Prix of Düsseldorf in his back. Everywhere in the city his face was on big posters in the streets but he made his ambitions come true.

“Whenever you win it is hard to describe your feelings. It was a long time for me to achieve this result and today it happened. It is a big success for me to win at home here in Chelyabinsk. I felt confident with the support of the crowd and they gave me energy when I started to feel tired.“
“The decision for the Olympic Games is up to the coaches. Our job is to fight. Hopefully I will be the one to go to the Olympic Games. Tomasz Kowalski we’ve met four times and I beat him four times. But he was my strongest opponent today.“

Kowalski repeated his excellent performance of the 2009 Europeans in Tbilisi winning a silver medal.
“I got the silver medal in 2009 and this is my second medal. It was very hard to get there, because I had a lot of tough opponents, people that were in the top ten at the Olympic Games. I am pleased with my performances today. I’m coming off a very hard training, and I am already qualified for the Olympic Games. The atmosphere at this event is very nice and this is one of the most important events. I lost again to Alim, but with each fight I am gaining more experience. I hope we will continue to compete with each other at this high level. It is always difficult to fight the host and he did very well.“

Lasha Shavdatuashvili (GEO) won a bronze medal. He lost to Gadanov in the quarter final. He defeated Sugoi Uriarte in the first repechage match and defeated David Larose for bronze. Larose was not in a good shape, perhaps good for him as he for sure will have his peak in London.
Rok Draksic won a fantastic medal again, after winning bronze in Vienna in 2010, he know defeated good judoka and belongs definitely to Europe’s top 3. Although he lost to the lower ranked Kowalski in the quarter final he did come back in a fantastic way defeating Shalva Kardava, the second Georgian fighter in this category, and he was victorious in a great way over Miklos Ungvari within one minute in his bronze medal fight. With a great arm throw he threw Ungvari for Ippon who was completely surprised by the Slovenian. Draksic wins in reputation throwing guys like Larose, Morishita, Sanjaasuuren, Uriarte and last year Kowalski as well. He is close to the Olympic top in this category.

Watch the photos of the medalists and all action in our media gallery.
https://www.eju.net/media/?mode=showEvent&id=1109