GALANDI PUTS OUT HOME FAVOURITE IN THE -100KG IN TALLINN 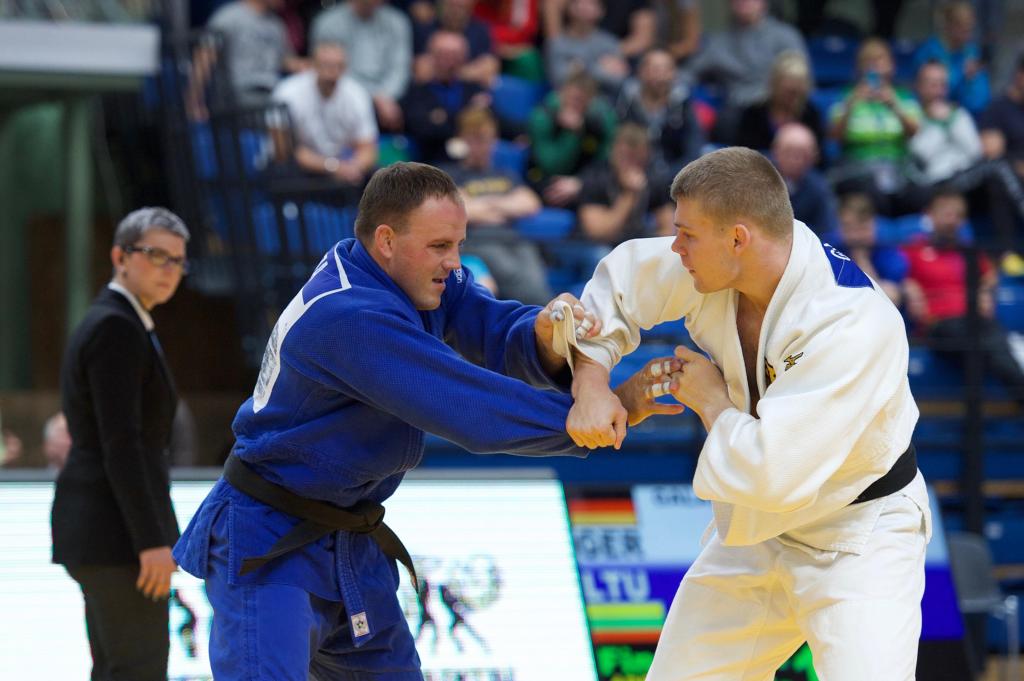 As we celebrate 50 years of the Estonian Judo Association, the European Open in Tallinn comes to a close, we can reflect on how exciting the tournament has been and have had an insight in to future European prospects.

The second day saw even more spectators fill the stands as the favourite of the day, Grigori MINASKIN in the -100kg category was performing on home soil, attracting the national sporting broadcasters to see what their international competitor had in store. Though the dynamic judoka made it to the semi finals, it was young German athlete, Philipp GALANDI that stopped him in his tracks in ne waza and forced him to settle for an eventual bronze medal. The Estonian crowd of course still elated with their success and second bronze medal of the day after the -90kg win from Klen Kristofer KALJULAID. GALANDI was nervous for this contest but in the end, the strong support for his opponent worked in his favour,

It was very exciting, the crowd was against me and of course that motivated me more. I managed to beat him, I just made the right decisions at the right moments. I keep a couple of things in mind before the fight in preparation, but the rest has to come with a feeling.

GALANDI has been out of competition due to injury for half of the year and was very happy with his medal, being able to prove to both his coaches and himself that he is ready to be back on the tatami making those important wins and is very optimistic about his future.

I was a bit nervous, it was my first European Open final but when you are on the tatami, the nerves fall away. All you have is your strategy and your plan and it was very exciting. Because of this success, I hope that I will be considered for a Grand Prix in future but we will have to wait and see.

Though the number one seed in the -90kg category didn’t manage to make it to the podium, the number two, Aurelien DIESSE (FRA) worked tirelessly to take the gold medal.

I feel happy, this is my second European Open, the first was in Luxembourg. After the European Junior Championships I went directly to Grand Prix and Grand Slam events and then the World Championships but I wasn’t efficient enough at that level. I don’t necessarily think it is about my level of judo as I’m able to beat the top players, but it becomes more difficult to be consistent and prove yourself.

DIESSE has fought against the best and was in fact the judoka that prevented Nemanja MAJDOV (SRB) from taking his second consecutive World title in Baku.

The decision of the Federation was to get me back training and preparing for the top level so I am here to test what I have been working on throughout the summer.

The Frenchman had Estonian, KALJULAID, in the semi final, and this year alone they have fought three times. Inevitably, each contest becomes more difficult as the individuals learn each others techniques and fighting styles, and as a result, produced an exciting contest that could have fallen either way. Though DIESSE felt some sadness for KALJULAID as this was in his home, at the end of the day, it is judo and there must be a winner.

Equally as exciting was the final against his fellow Frenchman, Alexis MATHIEU. The all-French final was much anticipated as both athletes had outstanding performances throughout the day and it would be close. They hadn’t fought before in competition and MATHIEU is still a last year junior, and has been away from practice due to injury. Coming back, there had been no interaction during his rehabilitation, but even with this, he gave a fantastic fight, and the pair battled it out until an eventual successful technique from DIESSE secured him the gold medal.

The medals were presented by former Olympic medallists including Aleksei BUDÕLIN of Estonia, Vsevolods ZELONIJS of Latvia and Estonian European Champion, Martin PADAR. All in all, the European Open was a success, with huge thanks to the Estonian Judo Association and their team who welcomed 35 nations, 17 of which taking home valuable medals with France, Netherlands and Germany taking the top three positions on the medal table.