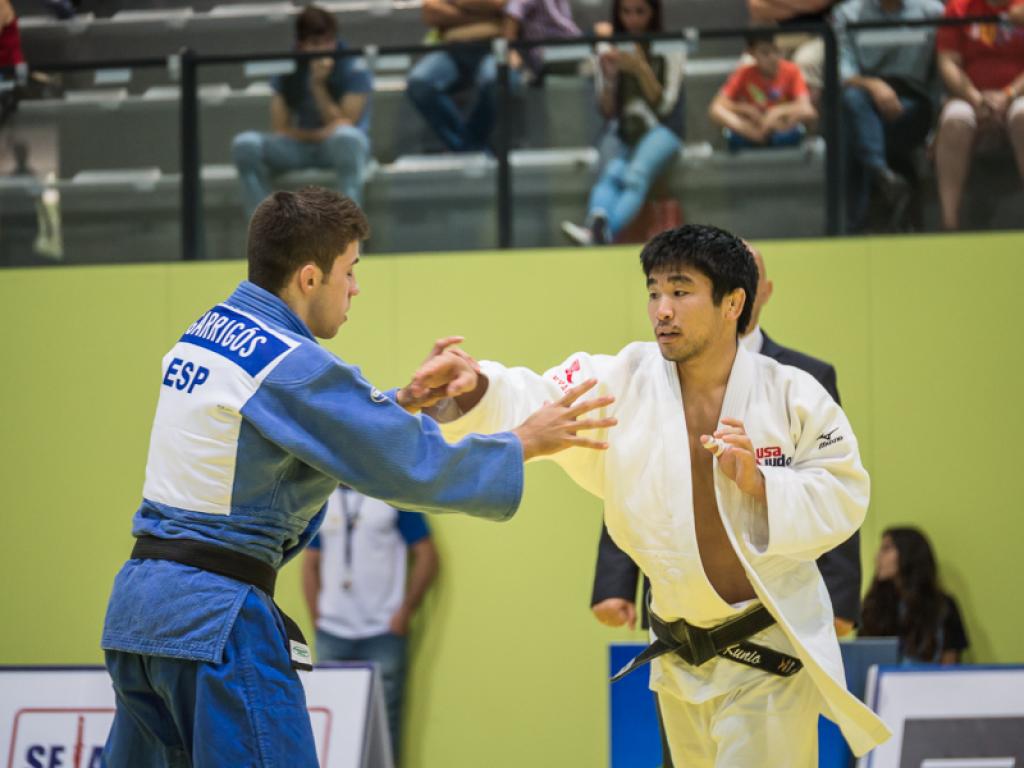 For the young Spaniard Franciso Garrigos Rosa it was a perfect day. The 19 year old youngster won gold at -60kg. This gold medal is the second medal at seniors after his silver at the Pan American Open 2013. Garrigos Rosa prepared well for this European Open. He only had three days off after gold medal performance at the Junior European Championships in Bucharest.

Despite not being seeded, the current European Junior Champion beat the number three seeded, Nuno Carvalho from Portugal, the number four seeded Aaron Kunihiro from the USA and definitely the biggest success was his defeat of the number one seeded, Ludwig Paischer from Austria. The fact, that Paischer is silver medalist from the Olympic Games 2008, Worlds Silver and Bronze medallist and twice European Champion didn’t bother the Spaniard, 13 years Paischer’s junior. „I knew that I had a difficult draw with Ludwig Paischer in my pool“, the Spaniard said after. Last time he lost against the Austrian: it was in the semi-final at the Grand Prix in Zagreb. „This time I just felt more secure, because I was very concentrated and focused“, Franciso Garrigos Rosa said modestly.

He defeated Paischer by a wonderful sumi gaeshi for ippon. But his hardest fight definitely was against the US athlete Aaron Kunihiro. „He is difficult to get and always so flexible and always adapts to each situation“, he analysed after. In the final he won against the local Nuno Carvalho. He said after: “I think I did pretty good fights, the final was difficult but overall I´m happy with the result”.

Nuno Carvalho was one of three Portuguese fighters in the Odivelas Sports Hall who left the Portuguese fans today quite satisfied. With two silver and one bronze medals the host team repeated the first day performance from the last edition of the European Open Men Portugal.

There was a good crowd gathered to witnesse many well-balanced combats and a great repetoire of judo techniques. Amongst the spectators was the Sports State Secretary, Emídio Guerreiro and the President of the Portuguese Olympic Committee, José Manuel Constantino. The athletes did their best trying to win precious points for the Olympic Qualification for Rio 2016. In total 10 different countries claimed medals, proving an even level at this European judo Open.

One of the most exciting fight of the day was the bronze medal fight in the under 73kg category between Nuno Saraiva from Portugal and Augusto Meloni from Italy. This time the bronze stayed in Portugal which naturally pleased the local crowd. The silver in that category also stayed “home” thanks to a fine performance by André Alves, for whom this is the third medal in the the Olympic qualification period. “Of course I wanted to win, but I am happy with my performance and I think I´m in a good shape right now.” said Alves.