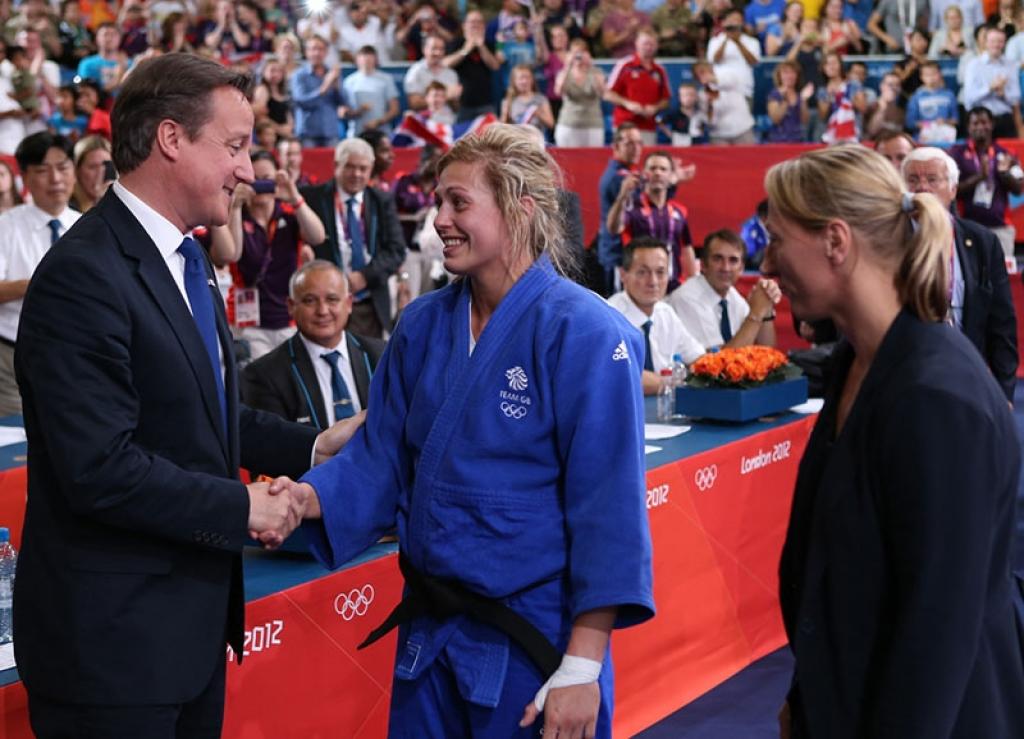 Gemma Gibbons won an unexpected silver medal today in the women’s U78kg division. Her fantastic judo meant a great success for British judo closing the gap between the last British medal in 2000 at the Sydney Olympic Games by her current coach Kate Howey. Gibbons had the honour of being congratulated by PM David Cameron after the contest.
Gibbons: “I didn’t know the prime minister was there. He shook my hand at the end and said well done. I’ll look back at that in years’ time.”

Later she responded on this special day for British judo and the great flow in which the European judoka are winning more than 50% of all medals, also in this category. The gold however was for America’s Kayla Harrison who showed to be the best today with attractive offensive judo. The crowd saw a massive final with two women who showed what it needs to claim the gold.

Gemma Gibbons reviews.
Surprised by my own achievements? “Yeah pretty much, I was hoping to win a couple of matches and get to the top 8. Everyone got behind me a really spurred me on. The crowd was unbelievable. I’ve competed with bigger crowds watching than this before (in Paris and at the world championships in Tokyo), but it’s never been like this. Today the crowd lifted me and helped me get the result I did.”

The Londener had a rough time and was injured for 6 months was ranked 42 and not expected on the podium but with her great will to score and attractive judo she was able to make it all through the final.
“I made some nice scores but it was not enough this time, but I’ve tried my best and had a good day.”

Her coach Kate Howey: “That’s why I am a coach. Since I was 16-17 years old I am in top judo, but this was such as an emotion. As a figher you are in control but on side you are not.”
“One minute you can be in the lead and sometimes it’s heartbreaking as in ten seconds where you’re been working for four years it can be tough.”

In her second bout she led against Mongolian Purevjargal but her point was reversed in a penalty but came back with an answer of a champion throwing the Mongolian for ippon in the last seconds.
“I felt the scores that were changed were mine, but I knew I would have to get them back.”

“Today I fought in the way I did because I had nothing to lose, I wasn’t favourite so I couldn’t attack half-heartedly.”

“I live in Greenwich, so very close by. The Olympic Games is something to strive for, but obviously with it being so close it spurred me on even more. I was very emotional after the semifinal but I knew I had to get my head around it and carry on.”

“Kayla Harrison was a great competitor. She is a very deserved winner.”

On boosting the popularity of judo in Great Britain:
“Judo is not a big sport in Great Britain. Hopefully lots of people had a chance to view the judo, and they want to get involved. Our team is capable, we’ve had a bad time in previous Games but this is our time.”

“I hope I can inspire the Great Britain judo players, and aspiring judo players. I hope it gets the country behind judo. My personal coach (Kate HOWEY, GBR) today was my childhood hero, she’s been a big part of my preparation and I’m really thankful for that.”