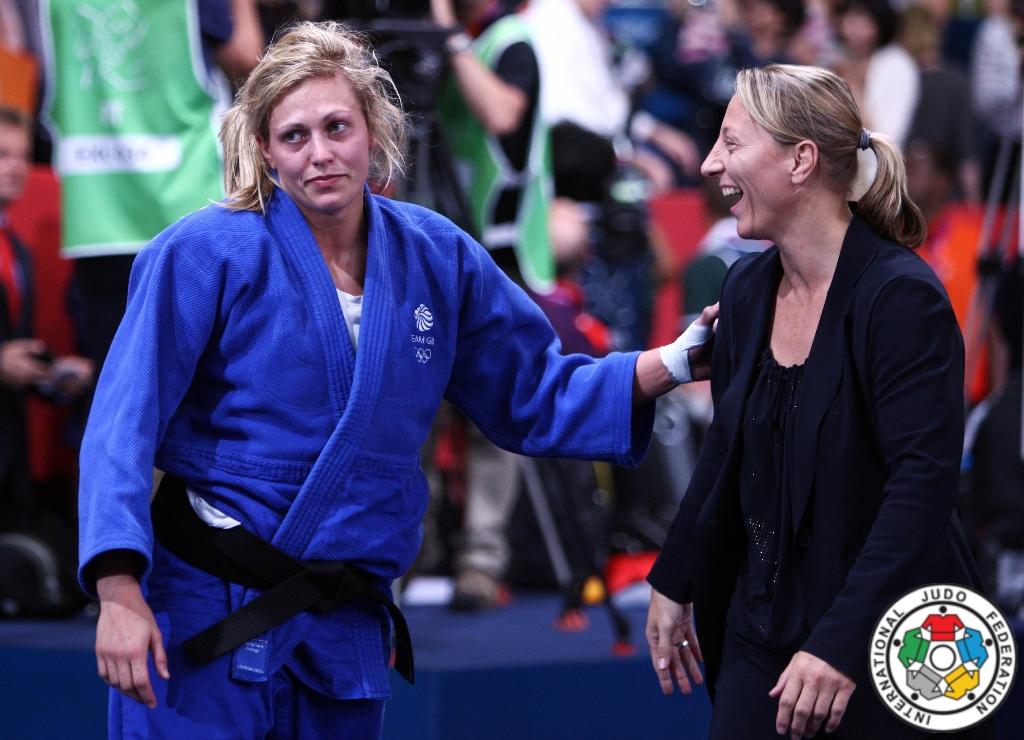 Great Britain is back on the judo map. With two medals Great Britain closed the gap of 1992, in another era where British judo was powerful with many successful women. At the Barcelona Olympics Nicola Fairbrother won silver, Sharon Rendle won bronze and Kate Howey, Britains current successcoach took bronze U66kg.
In 2000 she lost the Olympic final U70kg which was Great Britain’s last Olympic medal until last week.

Gemma Gibbons closed the gap with her mindblowing silver medal U78kg. A day later another medal, bronze of good old Karina Bryant. What a week for judo in Britain with new idols to look up to.

Gemma Gibbons looked back after the most remarkable day in her life.
Gibbons: “I’ve competed with bigger crowds watching than this before (in Paris and at the world championships in Tokyo), but it’s never been like this. But the crowd lifted me and helped me get the result I did.”
The Londoner was pleased with the Olympic in her hometown: “I live in Greenwich, so very close by. The Olympic Games is something to strive for, but obviously with it being so close it spurred me on even more.”

So how did the day evolve: good victory over Ramirez of Portugal and then Gemma’s second bout against Purevjargal (MGL) where she thought she scored a point but it was reversed against her: “I felt the scores that were changed were mine, but I knew I would have to get them back.”
“I fought in the way I did because I had nothing to lose, I wasn’t favourite so I couldn’t attack half-heartedly.”

She did win the match with all her power against the Mongolian and proceeded to her match against Dutch verkerk. Strong start and dominant but only in the last moments she could score a definite difference. So a place in the semi final against the World Champion Audrey Tcheumeo (FRA)
That match in the afternoon session was thrilling but Gibbons kept strong and nothing bad happened. Again she took the lead in the last moments with an amazing point against the French and the crowd really kept her going.

Gibbons: “I was very emotional after the semifinal but I knew I had to get my head around it and carry on.”

Watched by prime minister David Cameron she gained a spot in the final above all expectations.
“I didn’t know the prime minister was there. He shook my hand at the end and said well done. I’ll look back at that in years’ time.”
The final against Harrison was dominated by the offensive American Kayla Harrison who didn’t give Gibbons a chance to grow into the final with continuous attacks: “Kayla was a great competitor. She is a very deserved winner” Gibbons added.

Her twitter account @gemma_gibbons grew already in advance of the games but exploded after her great performance to the world’s number two judo related account, even much bigger than World and Olympic Champion Kayla Harrison. With tweets that Gemma is the new hero and idol of the new generation she can look forward to a great popularity and she boosted the popularity of judo in Great Britain.

Gibbons: “Judo is not a big sport in Great Britain. Hopefully lots of people had a chance to view the judo, and they want to get involved. Our team is capable, we’ve had a bad time in previous Games but this is our time.”
“I hope I can inspire the Great Britain judo players, and aspiring judo players. I hope it gets the country behind judo. My personal coach (Kate Howey, GBR) was my childhood hero, she’s been a big part of my preparation and I’m really thankful for that.”