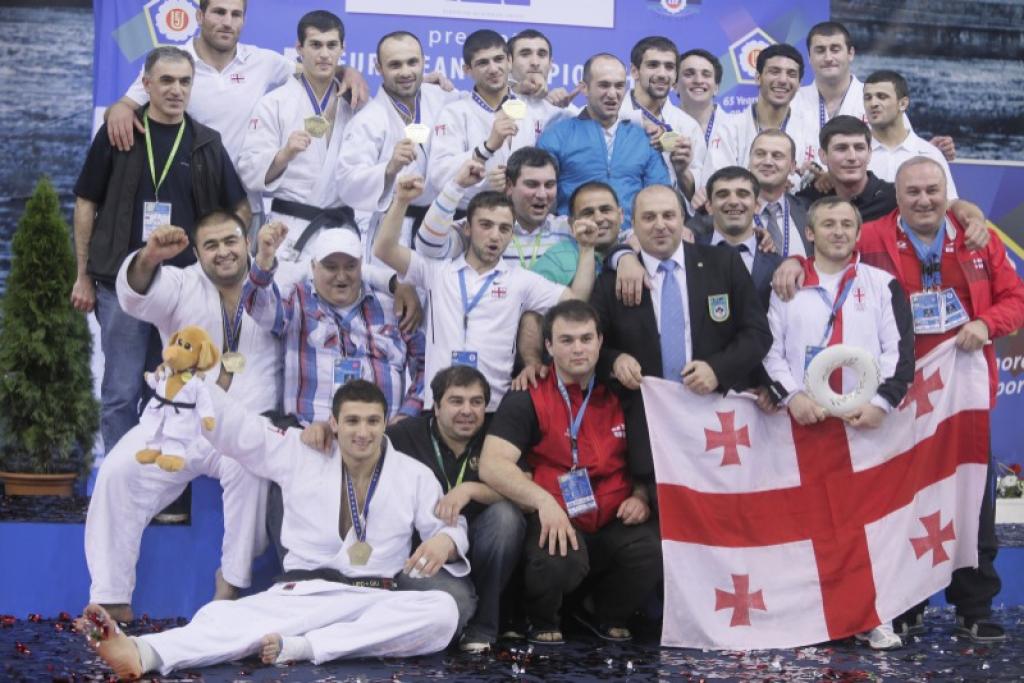 The Georgian men’s team and the women’s team from the Netherlands claimed gold as the adidas European Judo Championships 2013 concluded with the team championships Sunday in Budapest, Hungary.

Georgia had a bye in the first round and met Hungary in the quarterfinal. The Georgians, led by Olympic Champion Lasha Shavdatuashvili had not much trouble with the Hungarians, beating them 4:1. They put out an equally strong performance in the semifinal, defeating the Netherlands 4:1 as well. The final was a repeat of last year’s final against Russia. The Georgians had to overcome a little shock in the first match when Mikhail Pulyaev beat Shavdatuashvili, but rallied back to win the following four matches with Zebeda Rekhviashvili (vs Musa Mogushkov), Avtandil Tchrikishvili (vs Sirazhudin Magomedov), Varlam Liparteliani (vs Grigorii Sulemin) and Adam Okruashvili (vs. Renat Saidov).

Georgia took their sixth European team title since 2002. “This win means everything to me, to our team, to our country. I was very nervous in my fight, because I knew I could get the decisive point. It was very important that I did it”, Varlam Liparteliani commented. “We had a strong team here at the European Championships, we got three gold medals, three silver, one bronze, but it is not about the individual medals, the most important was the team event. Today everybody wins, everybody is happy”, he continued.

Russia made short work of Azerbaijan in the first round, sending them home 5:0. Slovenia offered more resistance in the quarterfinal and it came down to Magomed Nazhmudinov who scored the winning point in the last match to 3:2. Russia then was at the top of their game again against the Ukraine, winning 5:0. “I think our team did okay today. We didn’t have our strongest team here, though. Not only our Olympic Champions, also some other of our best athletes were not competing”, Kamal Khan-Magomedov noted.

The Ukraine went on to win the bronze medal match against Hungary 4:1. “We could have done more, but each medal is valuable. It is very nice, we have a lot of young athletes on the team and it is their first medal. We didn’t have our best team here, so we hope to be even stronger next time”, Georgiy Zantria told the press.

Germany took the other bronze medal. The Germans surprisingly eliminated France 3:2 in the first round. They lost to the Ukraine in the quarterfinal but prevailed over Slovenia in the repechage and also in the bronze medal match 3:2 over the favored Dutch men. “It is crazy. We wouldn’t have believed it if someone had told us this morning with the draw. But we’ve talked last night and this morning we all felt very good and we felt we can do it. And then each of us surpassed himself a little. It is great for our team after the year we’ve had. Now I think our team is on the right way”, Marc Odenthal said.

The Netherlands were World Team Champions in 2010, but had claimed the European title only once before in 1994. But they were determined not to let slip this one away, especially since Edith Bosch was competing in the last event of her long and successful career. The Netherlands saw Hungary off to the repechage in the quarterfinal 5:0 and then defeated Russia 4:1 in the semis. The last opponent was France, a record 17-time team champion with two reigning European Champions Automne Pavia and Lucie Louette competing in the final. However, the Dutch were not intimidated. Birgit Ente beat Priscilla Gneto and Sanne Verhagen beat Pavia. Then Clarisse Agbegnenou scored for France over Anicka van Emden. With her team being in front 2:1, Bosch stepped on to the mat for her very last match and won against Fanny Estelle Posvite for 3:1. Marhinde Verkerk earned the last point for the Netherland’s 4:1 victory. “Today was my last competition and I said to the girls, let’s do it, let’s enjoy it. We got together last night. But I didn’t enjoy it, I was so nervous! I thought about stepping on to the tatami for competition for the last time. And it was 2:1 (for the Netherlands) and I knew I could score the winning point. I had to stand straight. I don’t care that I won by penalties, the important thing is that I won”, Bosch commented. “The girls made my day from breakfast until now.  It’s our spirit. We motivated each other”, she added when asked about their key for success.

The French were obviously disappointed. “I am sad and disappointed. This is the second year in a row that we couldn’t get the gold. I had a good championship and a great day, but it wasn’t enough for the win today. France did very well in this championship.  Next year we will host the European Championships in France and we will be happy only if we get the gold medal”, Agbegnenou said.

The German women took bronze with a 5:0 victory over Austria. The Germans had lost only 3:2 to France in the semifinal. “It was a great experience to fight as a team. I am so happy with this medal. We thought it was possible to get bronze, but we didn’t expect to win so clearly against the Austrians.  The first match against France (in the semifinal) was really good, but then it wasn’t enough. I was very upset to lose my match. It was close against Slovenia (in the quarterfinal) as well, but we were able to score the last point”, Laura Vargas Koch explained.

Defending Champion Russia settled for the bronze this time. The Russians beat Austria 3:2 in the quarterfinal but then succumbed to the Netherlands. In the bronze medal match, they beat Slovenia 3:2 with Anastasiya Dmitrieva securing the winning point in the last match over European Champion Lucija Polavder. “It was a very anxious moment. I got out and it was 2:2. I knew how much all of us wanted to win and they gave me energy. I knew I can do it. I took my moment, I took a risk, and it did it. I am very proud that I was able to beat the European Champion”, Dmitrieva commented.

Watch all photos later on here