GEORGIA AND TURKEY - THE LEADING FORCE OF THE PREMIERE IN ATHENS 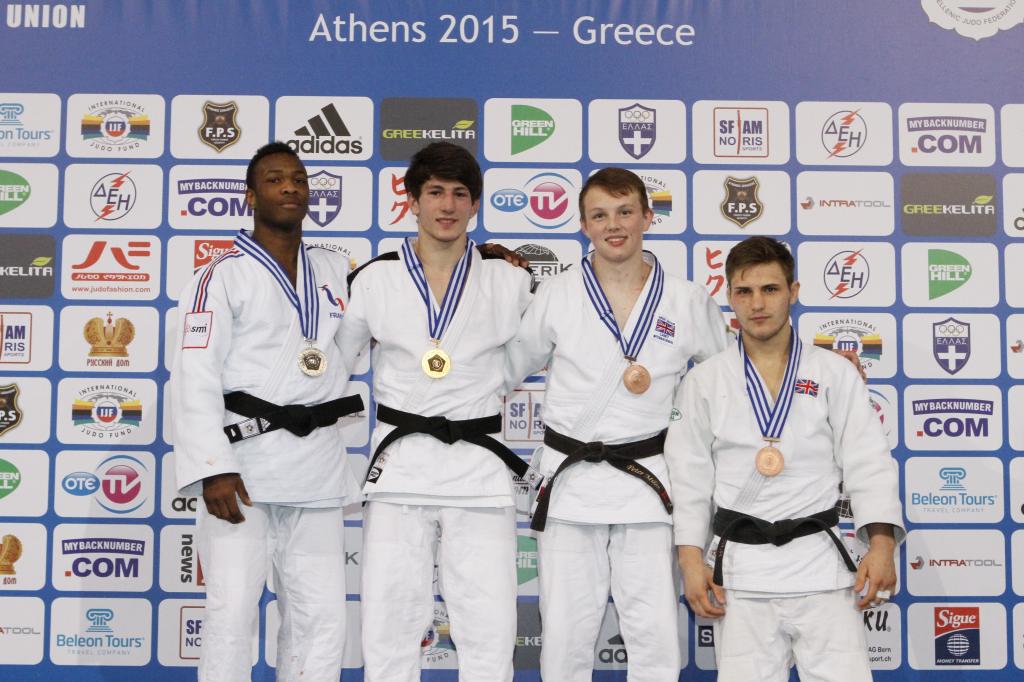 Georgian men and Turkish women played a leading role in the premier of the Juniors European Judo Cup named «Iliadis Cup 2015» which is hosted in the Indoor Arena of Paleo Faliro. In the event that bears the signature of Ilias Iliadis (2004 Athen’s Olympic Champion), a total of 339 judoka from 33 countries across four continents are competing during the weekend.

Georgia achieved the record of appearing five times on the podium, two of which at the highest step, while Turkey won two gold, one silver and three bronze medals respectively. After the first day, on the overall medal table Turkey is leading with seven medals which Georgia’s six closely follows.

In the -55 kg category Irakli Kupatadze from Georgia excelled defeating Yavuz Besel from Turkey in the final, who was fifth at the same event held in Thessaloniki two years ago. Vahagn Hovsepyan from Armenia, having been 5th in the 2014 World Junior Championships and the 2014 Junior European Cup in Thessaloniki, won the bronze medal, standing besides Jorre Verstraeten from Belgium.

The second gold medal for Georgia at the first day of the event was achieved by Tornike Nagliashvili in the -60kg category. The athlete from Georgia who won the gold medal for the second consecutive year at this tournament and won silver at the 2014 Junior European Championships, overcome Frenchman Romaric Wend-Yam Boudain to claim the final victory. Two judoka from Great Britain, Samuel Hall and Peter Miles were found in the third step of the podium.

In -66kg category, once more the presence of a Georgian judoka was impressive but Dzmitry Minkou of Belorussia was the one who ended up on the top of the podium. Bronzes claimed by Georgians Beka Shavdatuashvili and Beka Udesiani.

Alexandr Kolesnik from Russia became a gold medalist on Greek soil for the second time in the last nine months. After winning the 2014 Cadet European Championships he won the gold medal at the «Iliadis Cup» by defeating Lucas Otmane from France in the final of the -73kg category. Matthias Casse from Belgium and Naib Umarov from Russia won the bronze medals.

The final of the -44kg was predictable as Melisa Cakmakli of Turkey faced Elisa Adrasti from Italy. The Turkish judoka emerged to take the final action as well as the gold. Third place was shared by Olga Aladoshvili of Georgia and Tsvetelina Tsvetanova if Bulgaria.

A weight category above, Turkey won three of the four medals but not the shiniest one as that was taken by Marine Baumans from Belgium.

What was not achieved in the -48kg category for Turkey became a reality in -52kg one, thanks to Damla Caliskan, who overcome Portugese fighter, Joana Fernandes to lead the team to further celebration. The bronze medal was shared by Vanessa Machnicka from Poland and Merve Tas from Turkey.

The final celebration of the day gone to Jodie Caller from Great Britain, who defeated last years’ Belgium champion, Mina Libeer in the final. Betina Temelkova from Bulgaria, claimed a silver at Youth Olympic Games last year, she now added a third place to her collection, and so did Ariel Bezalel from Israel.