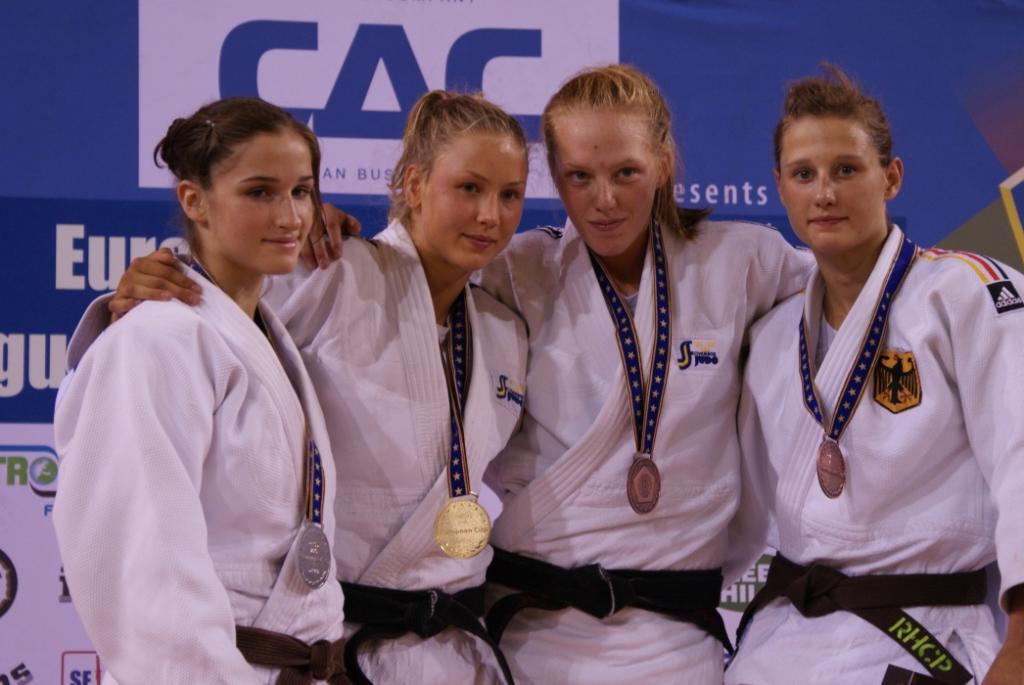 The men’s categories on Saturday were dominated by Georgians two gold medals and two silver medals. Lasha Shavdatuashvili (GEO) in the U66 category and Betkil Aphrasidze in U73kg showed spectacular techniques. Shavdatuashvili threw his final opponent with sukui nage. Aphrasidze scored yoko and wara-ari against Regis of Italy in the final match and maintained his lead until the end although at the end of the final match he seemed to be running out of stamina.

The Korean team has won one gold and one bronze medal.
General Secretary of the Judo Union of Asia Cho Yong Chul, was among the guests and watched Kim Won Ji (U60) throwing several opponents with his strong ko-uchi-gari. But his final opponent Shmagi Lagazauri was a tough fighter.
Kim however dominated the fight with a strong kumi-kata and won the final by two shidos. The gold medal was awarded to him by the Korean Ambassador in the Czech Republic.

Danny-Paul Kiel won the lightest category U55kg. Italian cadet Fabio Basile proved his quality by winning bronze among the juniors. “Czech
Republic is a lucky place for me” he said. “Here I won gold in
the Cadet European Cup in April and silver at the Cadet European
Championships last month. Today I have completed a set of medals. I am
looking forward to coming back next year. I believe that I will be strong enough by then to win the gold” he added.

His compatriots also fought very well. Angelina Bombara won the gold in
the lightest women’s category but Anna Berthole has lost in the U48kg final to Sonja Wirth of Germany.

Tina Zeltner (GER) pleased her father who is her coach as well by winning the gold U52 kg. She clearly dominated the category and only her semifinal opponent was able to fight Zeltner full time.

37 competitors fought U57kg but no one was able to stop Emma Barkeling (pictured) of Sweden who finished her final match by a spectacular throw in opening seconds. She prolonged last year’s title.

The tournament continues tomorrow and you can follow the matches live:
http://www.czechjudo.cz/Vysledky-soutezi_MT_2010_EJU_Juniors.htm