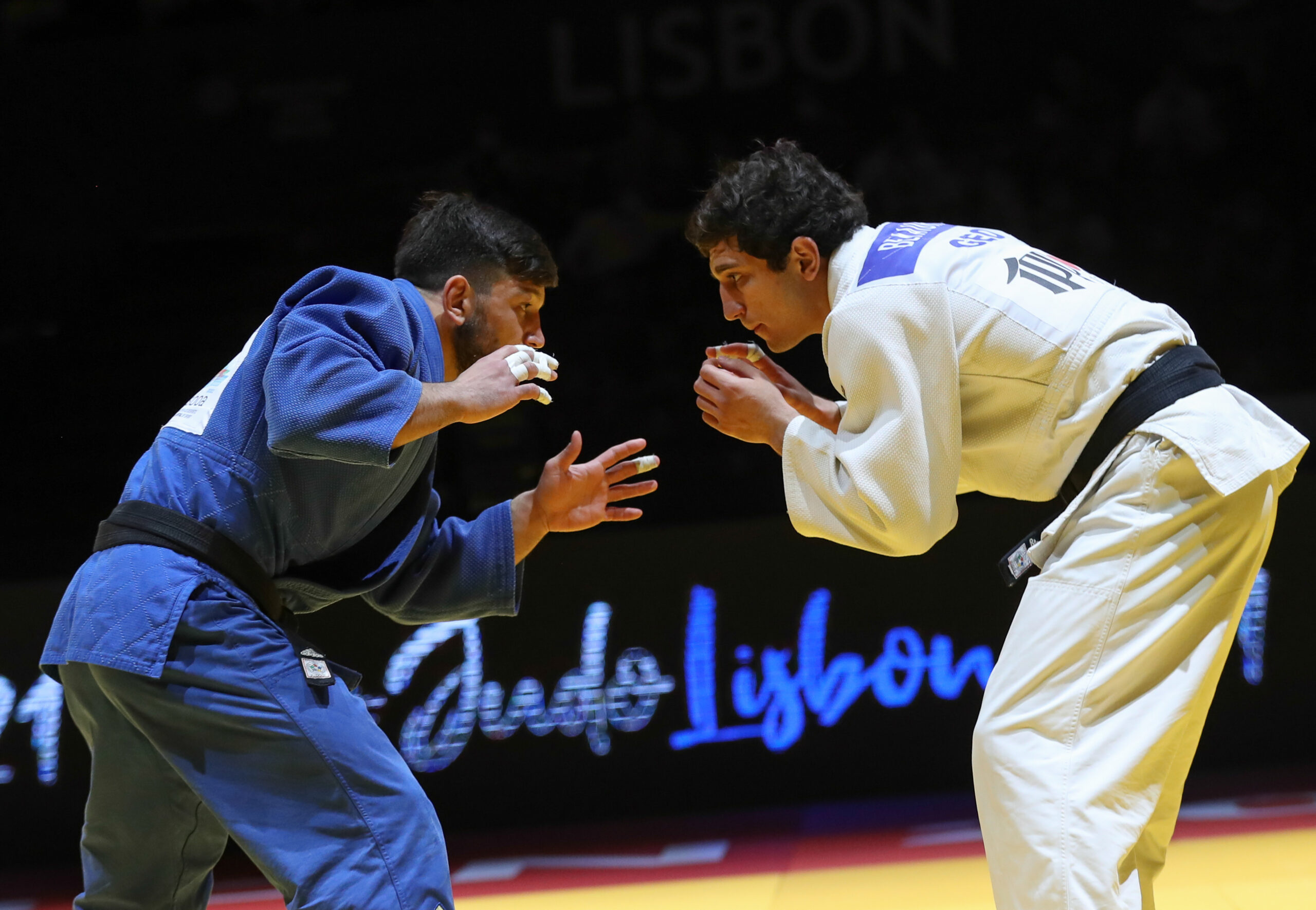 The all-Georgian final dominated conversation in the build up to the final block. Throughout the day both Lasha BEKAURI and Beka GVINIASHVILI impressed everyone in the arena with their exciting judo and now it isn’t just their technique that is getting everyone talking. Currently Bekauri is #4 in the WRL with Gviniashvili not far behind at #7, as we are fast approaching the Olympic Games we are all anticipating who we will see going to Tokyo representing Georgia.

For some national rivalries, there is too much feeling involved to be able to celebrate one another, especially when an Olympic decision is weighing them down, however when Gviniashvili came through his semi final against the 2020 European Champion, Mikhail IGOLNIKOV (RUS), Bekauri celebrated just steps away.

Of course things changed as they came out of the tunnel for that ultimate final. Unfortunately for the elder of the two, Gviniashvili, it wasn’t meant to be and the gold medal went the 2019 Junior European Champion, Bekauri. Though happy he won, it was a solemn victory as you could see how sad he was for his friend.

The standard was incredible in the -90kg category today with most of the top seeds taking on the challenge to become European Champion, but there can only be one. The bronze medals went to Igolnikov who executed his signature uchi mata and TOTH Krisztian (HUN) Mihael ZGANK (TUR).

For Guusje STEENHUIS (NED) it was an important day, still in competition with team mate Marhinde VERKERK. The pair eventually met in the quarter final with the latter accumulating three shidos which sent her to the repechage. Unfortunately she found herself in the exact same situation which ended her day here but there was still hope for the Dutch as Steenhuis made her way to the final after a golden score submission from Loriana KUKA (KOS).

The -78kg finalist awaiting Steenhuis was Beata PACUT (POL) who had to take on French duo Fanny Estelle POSVITE and Audrey TCHEUMEO to take her opportunity for a European title. Things were certainly looking up for Pacut following her silver medal win in the Antalya Grand Slam and she deserved her place in the final block.

It seems that the recent Grand Slam medallist could do no wrong, dominating the contest, however she was unable to get past Steenhuis’ defences, and the Dutch ran out of steam, picking up three shidos and handing Pacut the gold.

An unseeded Toma NIKIFOROV (BEL) was given a tough draw today but successfully made his way in to the semi final, beating Olympic medallists Elmar GASIMOV (AZE) and Cyrille MARET (FRA). In his final contest of the preliminary block, Ilia SULAMANIDZE was the first Georgian to try and stop the Belgian on his winning streak but was unsuccessful. Nikiforov claimed his place in the final against three-time European Champion and now ten-time continental championship medallist, Varlam LIPARTELIANI (GEO).

It was an almighty success for Nikiforov in the end as he took his second European title in style.

Kayra SAYIT (TUR) put in a brilliant performance in the +78kg category, so great that she took her second European title, beating Junior European Champion, Lea FONTAINE (FRA) in the final, a big ippon secured the gold medal. The contest she struggled the most in was against the other French entry Anne Fatoumata M BAIRO with neither athletes able to score but Sayit was smart tactically and in the end M Bairo picked up three shidos.

The bronze medals were taken by 2019 European Champion Maryna SLUTSKAYA (BLR) and Rochele NUNES (POR) which caused waves in the tribunes, happy they were able to celebrate yet another win on the third and final day of competition.

The men’s +100kg category was explosive, with Olympic and World Champions climbing to the top and claiming their place in the final block but it ended up being 23 year old Russian, Inal TASOEV who swiped the gold medal. It was an incredible effort on his part, managing to defeat eventual bronze medallist, Guram TUSHISHVILI (GEO) in the semi final in order to face Henk GROL (NED) in the final.

Tasoev didn’t wait long, just over a minute in to the contest in fact. He took advantage of a weak attack from Grol and countered for a phenomenal ippon, much to the delight of the entire Russian team and delegation in the tribune.

The second bronze went to Lukas KRPALEK (CZE). Following a bout of covid and performances he wasn’t happy with in previous tournaments, this bronze medal win was definitely something to celebrate.