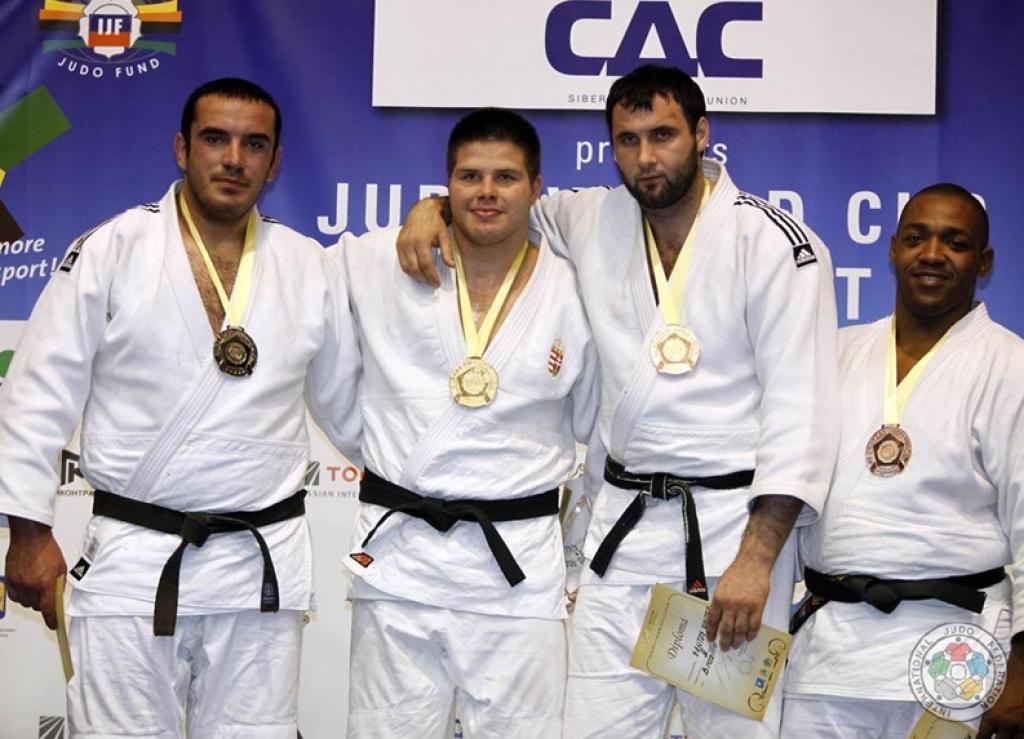 Avtandil Tchrikishvili and Zviadi Gogotchuri have added two new gold medals at the men’s World Cup in Bucharest. The Georgian team now had a total of three gold medals and Zviadi Khanjaliashvili won silver in the heavyweight category. With this result it was even more successful than its own World Cup in Georgia last January.

In Tbilisi the Georgian men were able to win two gold medals, one silver and one bronze. In Bucharest this weekend the results was three gold medals and one silver. Avtandil Tchrikishvili won gold U81kg by defeating Artem Vasylenko (UKR) who won the only medal for Ukraine. The youngster (21) lost against another rookie Tchrikishvili who’s just 20 years who continued his success of Tbilisi last January where he also won this category.
Bronze was for Antoine Jeannin (FRA) and Szabolcs Krizsan (HUN) who both got back in the repechage.

Zviad Gogotchuri (GEO-24yrs) defeated his Russian opponent Grigory Sulemin (24yrs) in the final U90kg. In this category where Zurab Zviadauri and Irakli Tsirekidze had been so successful, new talent is coming up with Gogotchuri and Varlam Liparteliani.
Milan Randl celebrated a second bronze medal this year in the World Cups and second for his country. He previously won bronze in Warsaw, now he won bronze in his match against Nikola Milosevic (SRB). Milosevic was close to winning the first World Cup medal for his country since 1994.

Lukas Krpalek was perhaps a more expected winner of gold. In the category U100kg he defeated Ramadan Darwish (EGY) in the final. Leonardo Leite (BRA) and European Champion Amel Mekic both won bronze. Krpalek won his third World Cup in his career. The last was one year ago in Lisbon.

Hungarian Barna Bor was happy to win his first World Cup since 2005. When his career started he won the World Cup in Budapest but since then he had won more than 10 international medals but no gold. Today in Bucharest he was able to win the heavyweight class. In the final he defeated Zviadi Khanjaliashvili.
Last week Bor finished fifth, a well known position this year, but this will give him a good spirit for more.

The World Cup continues next week in Tallinn, follow us then!
For now you can watch the photos in our media gallery.
https://www.eju.net/media/?mode=showEvent&id=619