GEORGIA TAKES THE GLORY AGAIN AT THE ILIADIS CUP 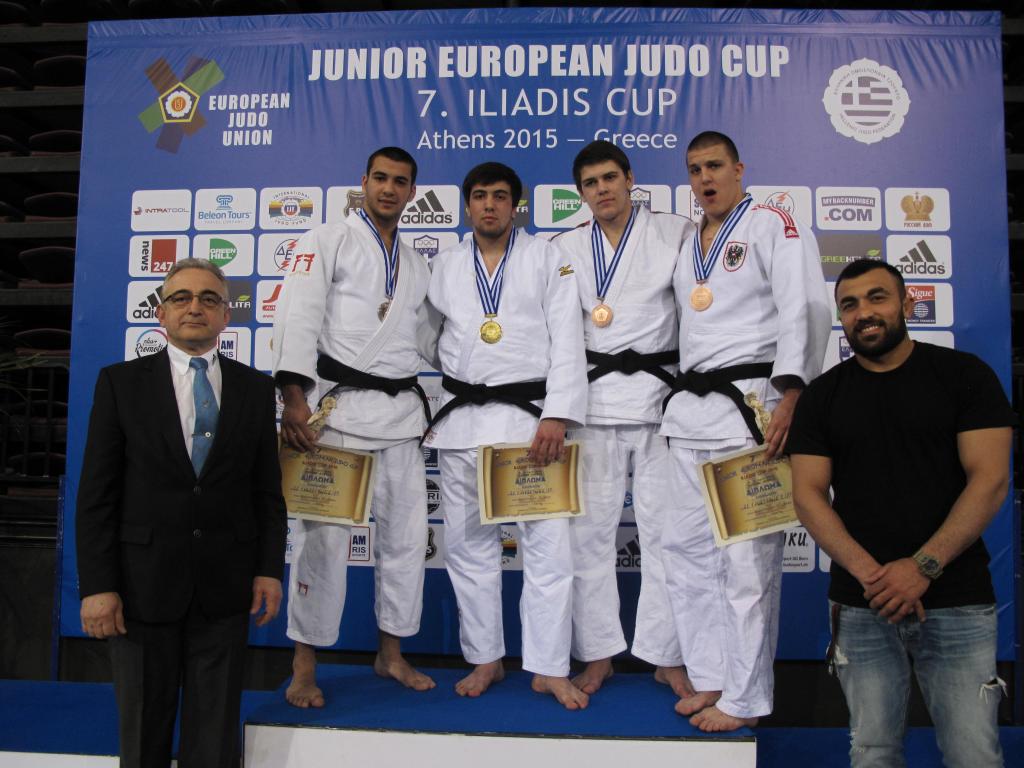 As they accustomed during the recent years, Georgia excelled once again at the Juniors European Judo Cup «Iliadis Cup 2015» hosted at the weekend in Sports Hall of Paleo Faliro. The total of four gold, two silver and five bronze medals ended in their bag.

Koba Mchedlishvili of Georgia was the favourite in the match against Israil Sagaipov which he proved impressively on the tatami. Having been third at the Junior World Championships in Fort Lauderdale in 2014 and taking the Junior European Champion title in Bucharest a weighty below, he achieved with relative ease the feat of winning the gold medal this time in the category of -81kg. The bronze medal was shared by Nicon Zaborosciuc of Moldova and Magomad Cecenoglu of Turkey.

Just like in the -81kg category, the favourite of the -90kg was also found on winning the gold. Mikhail Igolnikov, the winner of the Youth Olympic Games in Nanjing and Junior World silver medalist; just like Mchedlishvili, also stepped up a weight category since last year and immediately excelled. The final contest was against Oussama Mahmoud Snoussi of Tunisia. The third step of the podium was shRed by Austrian, Laurin Boehler and Georgian, Giorgi Gvelesiani.

In Russian hands, namely those of Niyaz Ilyasov, ended up winning the gold medal in the -100kg category. Last years’ Junior European Champion, defeated Danilo Pantic from Montenegro in the final. Mikita Sviryd from Belarus and Aaron Fara from Austria won the third place.

The +100kg category final was a Georgian affair, with Giorgi Lazuashvili emerging for victory. To do that, he defeated his compatriot, Jaba Mumladze. Giga Gelashvili, repeated last years’ achievement by taking another bronze medal whilst next to him was Nainus Umarov of Russia.

Just like last year, the -63kg category were dominated by a Greek. Elisavet Teltsidou, seemed to have no opponent from the very first race and managed to win the gold medal with relative ease. In the final category she defeated Adela Jakubcova of Slovakia. Inbal Shemesh of Israel and a regular attender and medal winner of the Iliadis Cup, Katie Jemima Yeats Brown of Great Britain were both found on the third place of the podium.

In the -70kg category, Gabriella Willems from Belgium celebrated winning the gold medal. This years’s Junior Belgian Champion was dominant against Emma Reid of Great Britain, while Soraya Luri Meret from Italy and Sophie Berger from Belgium ended up taking home the bronze medal.

The third gold medal for Belgium came through the hands of Leen Christiaens. Also a winner of the 2015 Belgium championships, was up against Toprak Firdevs when took the final victory. A Greek presence, however representing Sweden, Katerina Kalpakidou finished third, as did Cigdem Bora from Turkey.

The Athens tournament attracted the attention of the majority of television channels after two days of the competition; both national television and private media covered this important event, hosting interviews of all the leading athletes.
Over 200 judoka will participate at the location of St. Theodore Loutraki where a three days EJU Juniors Training Camp is taking place. Moreover, Athen’s 2004 Olympic Champion, Ilias Iliadis will also be attending the event.