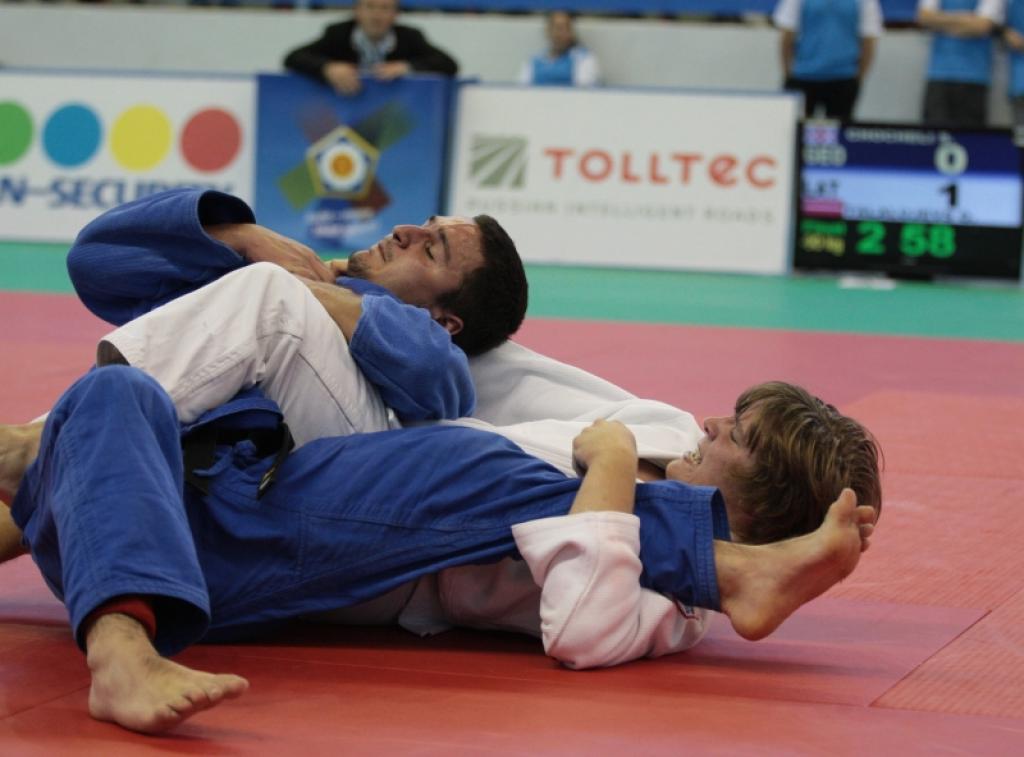 Georgia was the strongest country today in the men’s finals. The Ukraine and Georgia dominated today U81kg weight class. Beka Gviniashvili scored wazari after two minutes was strong in this category with 21 participants. The Georgian cadet Champion was not favoured to win the gold medal but developed like a tiger and defeat many participants from his region. Fifteen seconds before the end Gviniashvili finished the fight with an excellent kata guruma.
Another Ukraine vs. Georgia confrontation was the bronze medal fight of Ukrainian fighter Davydto Kharebava who needed 45 seconds to defeat Adam Varazishvili of Georgia.

Latvia Talalujevs impresses with offensive judo
The men´s final U90kg was one of the most attractive fights of the day and one of the best finals. Glebs Talalujevs of Latvia was attacking the whole day and in the final he started brutally, powerful and attractive against Shalva Chocheli. Talalujevs had won earlier this year at the European Cups in Berlin and Teplice and is one of the biggest talents in Latvia. Last year he won the European bronze in Teplice but this year no one could measure with the Latvian. He led in the final from the start but won the match by disqualification of his opponent because of leg grabbing.
Another Georgian judoka won bronze, Guram Tushishvili who defeated Ivan Zakharenka in his last fight of the day. Israel won its first medal this weekend. Lee Kochman won bronze Berlin and won bronze here in Cottonera after he beat Jalil Shukurov (AZE).

Russia adds fourth men’s gold
Russian Oleg Abaev was impressive and won his final in 21 seconds against Georgian Lazuashvili who was taken over by Abaev by an amazing kata guruma and a smashing end of the Championships. Russia was again very strong in the men’s category by taking four gold medals. In total Russia won eight medals in the men’s division and twelve in total.
Russia and Poland won the bronze in the heavyweight category. Russian Alexey Sapunov defeated Matej Grubisa of Croatia. Mateusz Kwiatkowski destroyed Attila Fabian by a devastating ippon. A good end for Poland that won its first medal. Last year Poland won one medal as well, but it was gold U81kg.
In the men’s division Russian won four gold medals. Russia won the full medal tally of this European Cadet Championship. Last year with single participation of each country Russia won even more gold medals (5) and eleven medals in total. It says a lot about the other countries and the quality of such event where 21 different countries won medals.
Enjoy the video footage in our You Tube Channel as well as pictures and results at this website.