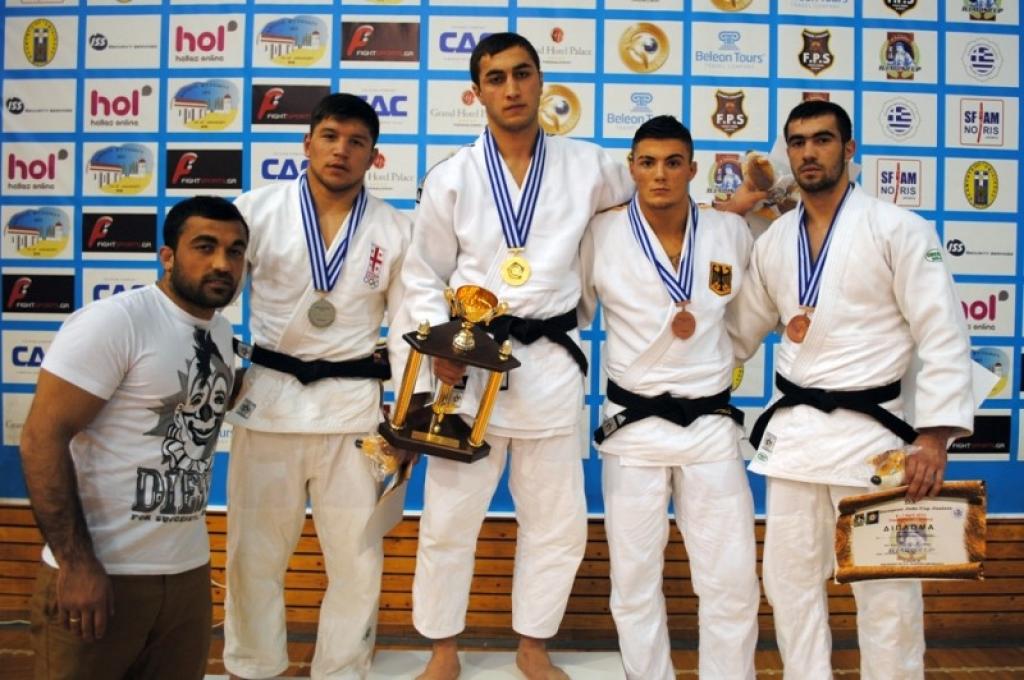 At the second and final day of Junior European Cup, the former Iliadis Cup, the Georgian men and Croatian and British women set the tone at the second day in Thessaloniki. In total 255 judokas from 25 countries participated this weekend.

Georgia went on to proceed from the very first day of the Cup. After two days Georgia was the best nation collecting five gold, five silver and three bronze medals, enough talent to follow up their Olympic Champion of 2012 Lasha Shavdatuashvili. Azerbaijan was the second best, gathering a gold, a silver and five bronze medals.

In the women’s division, Croatia had a hard task to edge out their competitors and won the first position. Maja Blagojevic won gold U63kg and Brigita Matic U78kg.

U81 Kg, the gold medal went to Serbian Stefan Majdov, who recorded a waza-ari by ippon seoi nage against one of the leading athletes of this category, Ivaylo Ivanov from Bulgary. Ivanov, who was a silver medallist at last year’s Iliadis Cup, is proud of the acquisition of a gold medal at European Championship U17 in 2010. At the same category, Alexios Ntanatsidis, the European Champion in 2012 at Porec, and number one junior in Europe in this category, could not defend the title he won during last year’s contest and was defeated by ippon (yoko guruma) by the Croation judoka Denis Beljic.

U90kg a level where 2004 Olympic Champion Ilias Iliadis has pedigree, it was Lasha Taveluri’s (Georgia) turn to win the gold medal. In the final, he defeated Beka Gviniashvili, his 17 year-old compatriot, by Ippon. In 2012, in Porec, Gviniashvili was 2nd behind Ntanatsidis, whilst in 2011 he won the World Championship U17 in Kiev.

In the -100kg category, 17 judokas participated: Guram Tushishvili from Georgia (Νο-4 in the European juniors ranking list, winner of the Cadet World title in 2011, defeated his compatriot Giorgi Kavtaradze by waza-ari (ippon seoi-nage) to win gold and became the winner of the category.

In the +100kg, two more athletes from Georgia were present. Levani Matiashvili, the favourite player of the category, won over Giorgi Zakariadze by Ippon (ippon seoi nage).  At the European Championships U20 held in Porec,  Matiashvili was tanked first and gave Zakariadze the opportunity to be among the top athletes at the ranking list of the heavyweights.

At -63kg, Maja Blagojevic, the Croatian Junior Champion defeated Bar Farin from Israel by waza-ari (by o-uchi-gari) and will raise to a higher position at the European ranking list. As for Katie-Jemima Yeats Brown and Ana Kokeza (CRO) won the bronze medal.

On Saturday, it was Bekky Livesey who sealed her performance and was first at  -57kg, and sunday, her sister Amy won a gold medal at -70kg, where 5 athletes participated in total.  At the match, where the gold medal was judged, Amy Livesey won by Ippon the Greek judoka Elisavet Teltsidou, who –in turn- was limited to the second-place and the silver medal.

Unquestioned, Croatian Brigita Matic was the favourite athlete to win the gold medal U78kg and proved this in the tatami. Matic, having won three European medals during the last two years, managed three victories at three games and shined at the top of the medal podium. Chiara Meucci from Italy won a silver medal.

The event was attended by the Greek Minister of Sports, watch the photos below