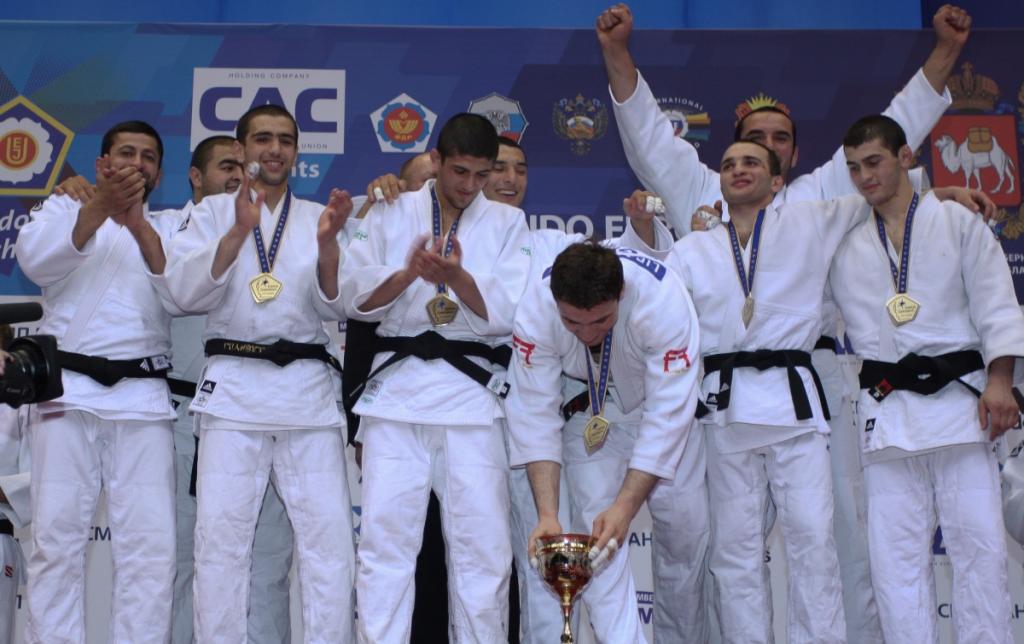 The men’s team of Georgia have won the European team title. In Chelyabinsk the Georgian was more efficient than the home team of Russia. Not even Alexander Mikhailin could change that.

Heavily supported by the crowd Russia took the lead in the first match. Musa Mogushkov defeated Shalva Kardava of Georgia. Batradz Kaytmazov was in complete control in his match U73kg against Nugzari Tatalashvili. He led the match but Tatalashvili devastated the crowd throwing Kaytmazov one minute before the end in a smashing Ippon realizing the equalizer. Even the usual relaxed Georgian coach Peter Seisenbacher cheered from his coach position. But he knew that miracles are necessary to get a second European team title. The last time Georgia won was in 2009 against France and the first ever time was in 2007. The strong basis is still present in Georgia.

In the match U81kg Arsen Pshmakhov of Russia was more active than his Georgian opponent Avtandil Tchrikishvili but couldn’t make a difference. 35 Seconds before the end Pshmakhov made a mistake and Tchrikishvili took advance and scored a yuko.

Varlam Liparteliani could realise the miracle. A boosted confidence after his European title should help him against Kirill Voprosov who had beaten Liparteliani twice in his last two matches against the Russian. In 2010 Voprosov defeated the Georgian in the World Team Championships After two minutes Liparteliani scored a waza-ari and was virtually European Champion. It doesn’t say much in judo, in Chelyabinsk the home advantage can be a difference maker. However not for Liparteliani, who added a full point one minute before the end and took the European title for his country. Also on Saturday the energetic home crowd motivated Liparteliani even more to give his best effort. In 2008 he was in the team when he won the World Team title in Tokyo and in 2010 he won the European team title in Vienna.

Varlam Liparteliani (GEO): “We are very happy with this gold medal. I won the gold (in individual competition) and now with the team.“

Adam Okruashvili didn’t have to win against Alexander Mikhailin who defeated the Georgian all three times in his career. Also in the last match of Sunday. This time Mikhailin had to be satisfied with silver despite his win against Okruashvili satisfying the amazing public this weekend in their last match in Chelyabinsk.

Alexander Mikhailin (RUS): “We were a little unlucky. After the girls won, we really wanted to do the same and to prove that we are not weaker than they are. We were ready and in the right mood. We really wished it to happen but it didn’t. We were not tired. We know the other guys of Georgia well and have fought them many times. Maybe someone up there decided that Russia had won enough medals and if we now win the team as well it would be too much.“

Avtandil Tchrikishvili (GEO): “This medal means a lot to us and to Georgia. We have worked a lot for this and we are very happy that we were able to achieve this. I think our whole team did very well today.“

Peter Seisenbacher needed a miracle and he got it!

Bronze medal fights
The Ukraine won bronze against France. The team of Vitaliy Dubrova scored the equaliser in an exciting match between Vadym Synyavsky and Mathieu Dafreville. Dragin opened the match with an excellent score against Hervorgian. Heavyweight Stanislav Bondarenko won the final point against Cyril Maret and the Ukraine won their fourth consecutive European team championships medal.

Volodymir Soroka (UKR) of the bronze team: “We proved today that winning the title last year was not a fluke. We met the French in the Final there and now again in the bronze medal final. I felt good. Each victory is difficult in its own way. When you compete with the team it is different. The audience is great. They are very supportive and knowledgeable about the sport. Obviously we might me closer to them than some of the other countries, and they supported us well.“

The team of Poland won the bronze medal against Great Britain. Ashley McKenzie is strong but still a lightweight against Pawel Zagrodnik. Danny Williams defeated Wilkomirski scoring the equalizer. In a tight match Euan Burton won by decision against Lukasz Blach. It was up to Matthew Purssey to take the bronze of Great Britain but 34-year old Robert Krawczyk won his first European medal in a team event when he won against Purssey. Knowing that he had a good chance with Janusz Wojnarowicz as last man standing for Poland Krawczyk’s fight was essential. Chris Sherrington had not much chance against the Polish heavyweight although it wasn’t expressed in the score. Wojnarowicz won anyway and secured the bronze for Poland, for the first time since 1994 in The Hague.

Krzystof Wilkomirski (POL): “This is my first time on the team and maybe it was my last European Championship. I am 31 years old. I was very sad after loosing my first fight in the individual competition (-73kg), so I really wanted to win a medal with the team. Now I am tired but happy. Our team is old, but good. We have Robert Krawczyk, a World medalist and Janusz Wojnarowicz, a multiple medalist at the European Championships.“