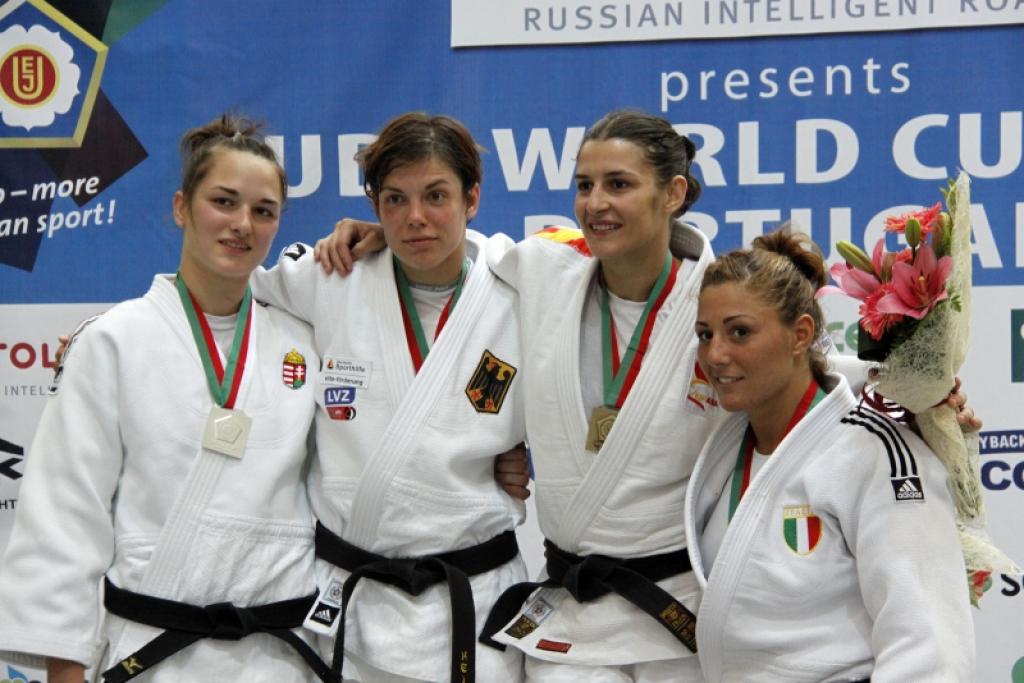 At the World Cup in Lisbon the German women’s team won the most medals. Today Barbara Bandel (U70) and Heide Wollert (U78) gave the Germans the overall lead in the medal tally. The heavyweight category was a victory for Russian Tea Donguzashvili in her final against Franciska Konitz, also German.

On Saturday Germany won bronze and silver U52kg in the Pavilhão Multiusos de Odivelas. Barbara Bandel was not very likely to win. She was however able to defeat all her four opponents starting with Moira de Villiers as warm-up for strong Maria Portela. In the semi final Bandel defeated Juliane Robra and took revenge on her loss two years ago at the World Cup of Lisbon in her quarter final against the Swiss. In the final Nataliya Small (UKR) was defeated for the first time which gave her the first German gold this weekend.
Usually Iljana Marzok, Kerstin Thiele and Laura Vargas-Koch are the frontrunners for Germany in this category, today 23-year old Bandel took her chance and won her first World Cup medal ever.
Robra came back and won the bronze against Spanish Maria Bernabeu. Erica Barbieri, who lost against Smal in the semi final defeated Maria Portela who seems to have subscription for fifth places this season. At least she is consequent taking her third fifth place in Europe this year.

Heide Wollert was the second to win a gold medal. She defeated Abigel Joo in the final U78kg. At the World Championships in Tokyo Wollert beat Joo in the 1/8 final but this year in Moscow the Hungarian 2010 European Champion took revenge for that. On Sunday Wollert won a second time and won her second first place in Lisbon. In 2008 she unexpectedly won the European title in her race to qualify for the Beijing Olympics. Although this category was the strongest, Assunta Galeone (ITA) took bronze, her first this year and continued the Italian success of today in the international World Cups.
Raquel Prieto won bronze and equaled the Spanish performances of last year taking a poor two bronze medals back home.

The heavyweight title was for Tea Donguzashvili from Russia who won her 16th World Cup in her career. She had never won in Lisbon. In 2008 she won silver at the Europeans when she lost against Mondiere. On Sunday she defeated Franziska Konitz in the final. Konitz had good chances with her athletic body, but Donguzashvili was waiting for chance to devastate Konitz with a smashing ippon halfway regular time. The combination of power and technique was too much for Konitz with an awesome maki-komi.
Donguzashvili was given the medal by Rosa Mota, top athlete in the marathon for many years. The Olympic champion received a standing ovation by the crowd in recognition of all the contribution she has given to Portuguese sports.

The first bronze medal was collected by Irina Kindzerska (UKR) who defeated Sarah Adlington (GBR) in a thrilling match and exhausting match.
The second bronze was for Belkis Kaya from Turkey who was able to overcome Lucia Tangorre.

The German women’s team won the medal tally in Lisbon and they collected again 5 medals, kust like the European Championships in Lisbon in 2008 when Heide Wollert took the title and Romy Tarangul won silver, this weekend bronze. Franziska Konitz reached the final this time and won bronze in 2008 at the Europeans.

Next year Lisbon will be one of the last events to qualify for the Olympics, so the men will return in the Portuguese capital.
Lisbon is on holiday! These days, it is celebrated the town’s saint, Santo António.