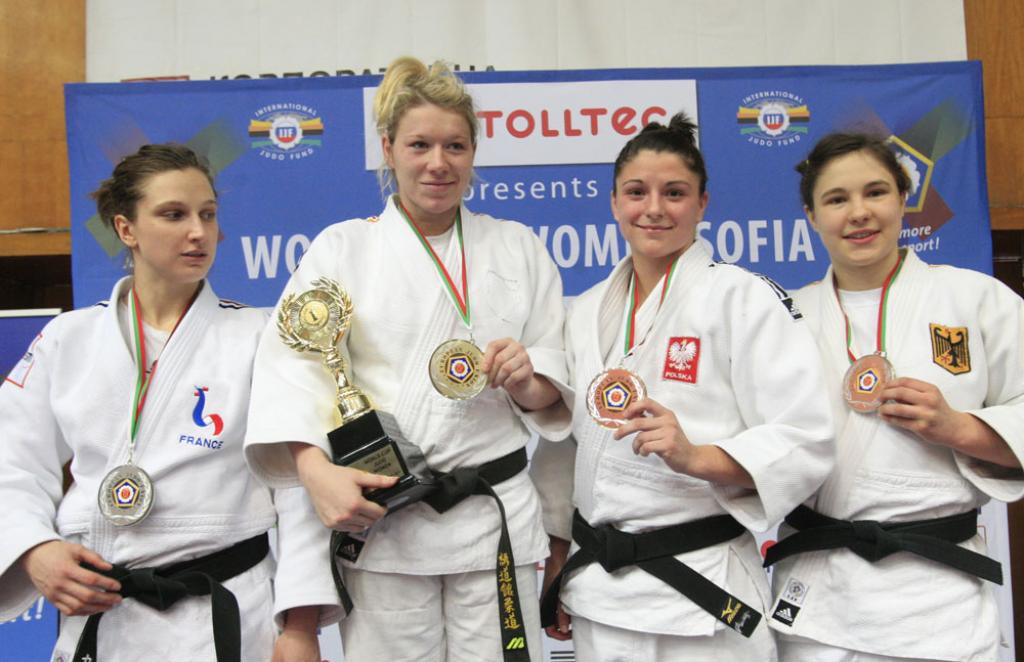 The German women’s team won the most medals at the first World Cup of this year. Just like yesterday the women won three medals in all colors. Russia follows in the medal tally with seven medals, five bronze, silver and bronze.

The German dominance was clear in the U70kg category where Kerstin Thiele was the strongest today. The 24-year old Thiele won her first ever World Cup after winning four bronze medals and the lost final at the IJF Grand Slam in Rio in 2009. 2011 Starts fantastic for the double European medalist. In Sofia she defeated Karine Berger (FRA) who had won the European Cup last year in London but was never successful at a World Cup so far.
The second medal for Germany was for Laura Vargas-Koch, the European U23 Championships runner-up of last year. Vargas-Koch also won a bronze medal last week at the German Championships where Thiele did not compete.
Katarzyna Klys (POL) won the second bronze medal.

Canadian Marylise Levesque won her second ever World Cup U78kg, the 10th and today the 11th ever World Cup victory for Canada since 1997. The Canadian women have quite some choice in this category. Four out of the 11 medals where collected in this category. Last November she won the IJF World Cup in Apia. The Canadian globetrotter defeated Germany’s Luise Malzahn in today’s final.
Three German women finished in the top eight in Sofia.

In the heavyweight category the day finished with an all Russian final. A clash between Tea Donguzashvili and Elena Ivashchenko decided on the ground by the experience Donguzashvili. She won her 14th World Cup, and the second in Sofia. Her first, can you imagine, was in 2001. Ivaschenko won the event in 2004 and 2009 but over the years Lucija Polavder (SLO) dominated this category with four wins.

Japan finished third in the medal overview as Kanae Yamabe added another medal after yesterday’s two. Turkey won another medal by means of Gulsah Kocaturk and finished fourth in the country overview.

Watch all pictures in our media gallery:
https://www.eju.net/media/?mode=showEvent&id=611