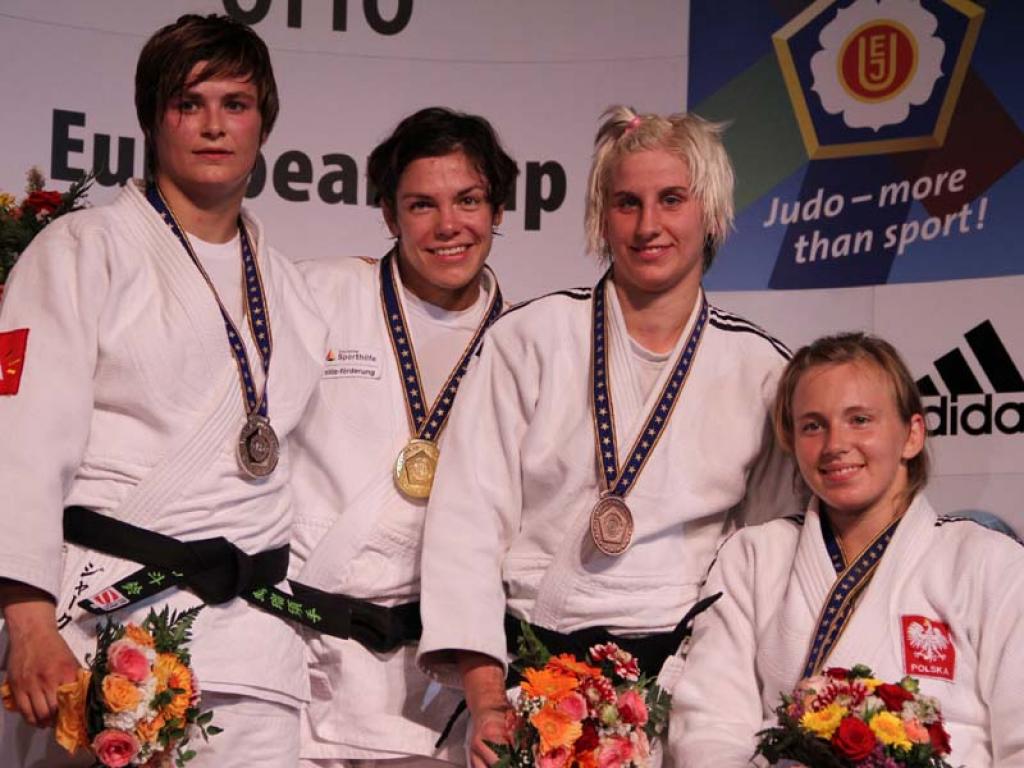 Today it was former World Champion Edith Bosch (NED) who won in Hamburg. Although the strong Dutch team was in Hamburg for another goal than winning the medals, but more over to train and to get the right feeling as preparation for the worlds, it was Bosch who fought all her matches. Yesterday headcoach Marjolein Van Unen considered not to fight the final matches just like last year. But Bosch didn’t get too much opposition today compared to the Grand Slams in Rio and Moscow where she won two silver medals.
In today’s final British Megan Fletcher was defeated rather easy. In the semi final the tall Dutch sent Briton Sally Conway to the bronze fight. Conway won the bronze as well as Maria Bernabeu (ESP).

Jacqueline Lisson, German’s number two was the great surprise U52kg. Lisson who lost the German final to Susi Zimmermann overcame Slovenian Petra Nareks in the final who had beaten Zimmermann in the semi final.
Zimmermann lost the bronze of Dutch 28-year old Miriam Polak, just as old as British Sophie Cox who won the other bronze medal. Both medalists show that fun in judo can be more decisive than pure talent.

Heide Wollert was the expected winner of gold in the U78kg category. Wollert also won the German Open last year and was winner of the Grand Prix in Düsseldorf. After finishing fifth three times this summer in Rio, Sao Paulo and Moscow, she could use a mental motivation. In the final Wollert defeated Belgian Catherine Jacques who again showed that her change from U70 to this category is successful. Jacques won the IJF Chinggis Khan World Cup in Ulaanbaatar two weeks ago and is moving towards the top position after a period without much progression U70kg.
The 16 participants didn’t have the ultimate quality and the expected favorites could easily qualify for the semi finals. Polish Daria Pogorzelec and Slovenian Ana Velensek won the bronze.

In the men’s category U66kg the world champion Georgii Zantaiara was the expected winner. Quite a few World Championships nominated athletes participated and Zantaraia overcame French David Larose in the final halfway the match with a decisive ippon.
German favourite Adrian Kulisch won bronze as well as French Florent Urani who keeps on winning international medals.

The Swiss men were absolutely amazing winning four medals and Micha Egger was the biggest upset. He took the gold defeating 21-year old Faruch Bulekulov, who just missed bronze last year in Sindelfingen. The more experienced Micha Egger (28) had never won an international big event. He has a good year winning bronze at the World Cup in Lisbon, but this was the motivation he needed. Maybe he can now finally become a stable champion in his own country where the U81kg category was always a mix if various fighters taking the national title, but never succeeding to make an international breakthrough.
The average age of the winners this weekend is exactly 25 year. At the previous European Cup in Istanbul it was 22 years and older than any European Cup this year.
German Robert Gess and Joachim Bottieau (BEL) took the bronze.

Stanislav Cernega won the most important medal this year for his country Moldova. Cernega was the surprise in the category U100kg. 22-Year old Cernega surprised Swedish Martin Pacek (23) in the final. Moldova sent a strong team to Hamburgbut just missed a medal yesterday when Marcel Trudov lost the bronze medal fight U73kg and Victor Scvortov finished seventh in the same category. But a gold medal for Moldova at an international event was a long time ago. Last year in June Valeriu Duminica won the World Cup in Bucharest for Moldova. Clearly a booming country with Vadim Bocan who just missed a medal at the Junior Worlds and Scvortov and Sergiu Toma who were close in the medal stage of the senior Worlds last year in Rotterdam.

The European Cup in Hamburg showed some great surprises as the level is little lower than the World Cups or IJF events and the younger judoka can mix with the more experienced judokas who want to stay in the picture for the qualification for London 2012.