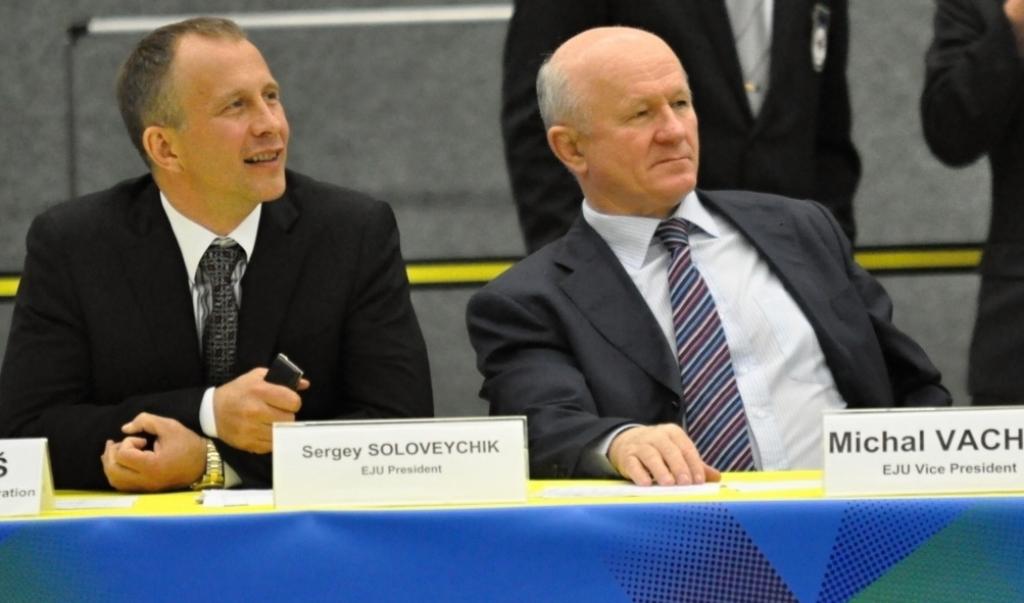 The Cadet European Cup continued in Teplice, Czech Republic on Sunday. Members of local government came to watch the tournament and present the awards.
In the first final of the day Balasz of Hungary fought Klose of Germany. This fight went to a golden score. Klose was more active and won the match by decision.
In -73 final Schneider of Austria threw Avagyan for ippon with a spectacular uchi-mata. Schneider was also awarded the ippon trophy for the throw of the day.
Samardzic of Bosnia fought Prosdocimo of Italy in -63 final. Neither of these girls scored in the fight and also this final was decided in golden score. Prosdocimo won the fight by decision.
The crowd saw a nice and dynamic fight in -81 final between Knolik of Belorussia and Matijass of Germany. Matijass dominated the fight, scored 2 yuko and claimed the title.
Hanelt of Poland performed well against Gahie of France in -70 final. She scored yuko with ko-uchi –gari and maintained the lead till the end of the fight.
-90 final was the third final of the day which was decided in golden score. Schuetz of Germany defeated Vasian of Romania by penalties.
In the +78 final Bauernfeind of Germany scored waza-ari with soto-maki-komi against Karpati of Hungary. The she pinned her with tate-shiho-gatame and scored second waza-ari.
In the last final of the day Katanga of France threw Fabian of Hungary with a beautiful o-soto-gari and scored the last ippon of the tournament. Also Katanga was awarded ippon trophy for that throw.
Germany was the most successful nation of the tournament and won the golden cup. France was the second, Azerbaijan won the bronze cup.
Teplice was the seventh Cadets event this year in the European Cup circuit. Next week the judoka will go for the medals in Pitesti (ROU).