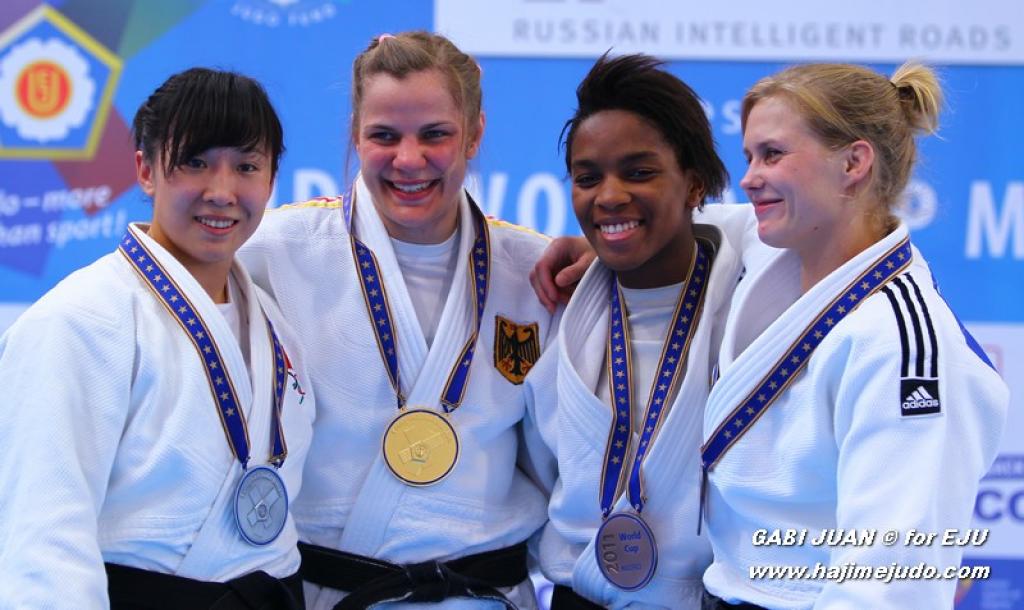 The Spaniards however didn’t win an expected gold medal U52kg. Germany’s Mareen Kraeh defeated home fighter Ana Carrascosa with a beautiful point in the final. Carrascosa defended her title but couldn’t prevent Kraeh from scoring who won her second World Cup. Kraeh won the Super World Cup in Holland three years ago at the age of 24. Now 27 years she was able to hold of 31-year Carrascosa.
Laura Gomez (SPA) who had lost against Kraeh in the semi final but won bronze in her match against Laura Pinotti (ITA).
Aynur Samat from Turkey won her second international bronze this year after the Grand Prix in Baku.

Spectacular scores for the crowd in the category U57kg. Ketleyn Lima Quadros won gold with a great takeover of Morgane Ribout (FRA). Ribout had scored a waza-ari previously but this time she was countered by Lima who could see this throw coming seconds before, an easy target for the Brazilian. Lima Quadros lost the final at the World Cup in Oberwart in February against Aiko Sato (JPN) but was now able to beat the former World Champion.
Isabel Fernandez (SPA) was 18 years older than her opponent but was able to defeat Juul Franssen (NED) and take the fourth bronze for Spain.
Iouilietta Boukouvala (GRE) won bronze defeating Carla Grol (NED) in this heavy category with strong competitors.

Claudia Malzahn (GER) won gold U63kg in the final against Xu Lili (CHN).
Lili defeated Esther Stam (NED) in the semi final in a tough match.
Dutch Esther Stam who had a great day devastated Anne Laure Poli for bronze within 6 seconds with a smash of an ippon.
Malzahn defeated in the semi final Brazilian Mariana Silva. Italian Edwige Gwend won bronze against Silva after seeing a yuko against her but came back powerful with waza-ari.

Pictures can be found here:
https://www.eju.net/media/?mode=showEvent&id=624