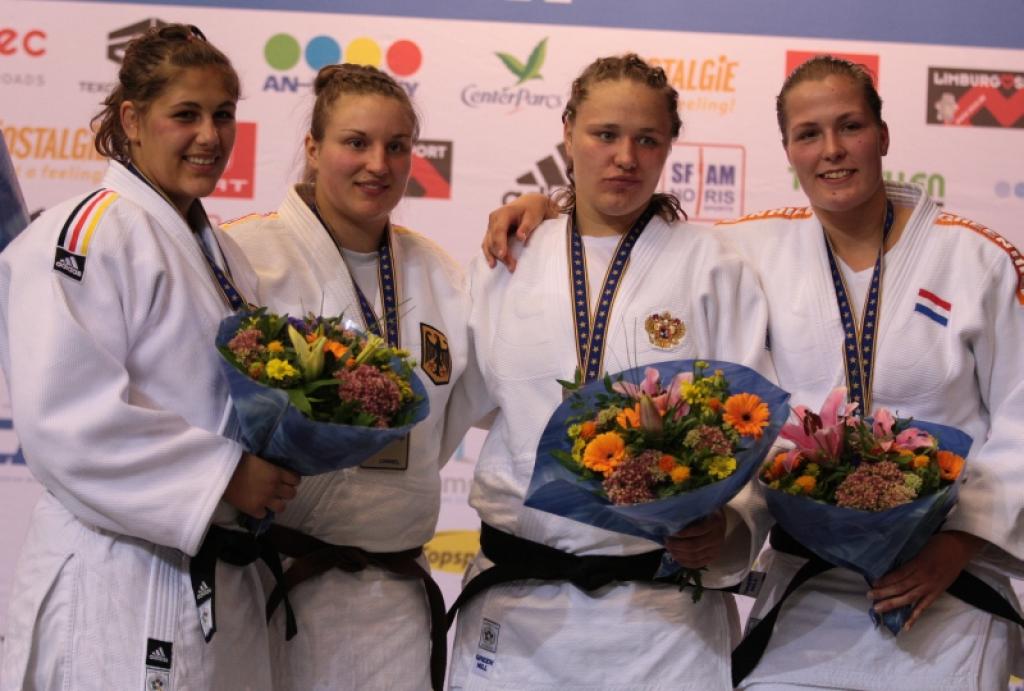 Carolin Weiss won the European junior heavyweight title today in Lommel. Weiss defeated her well known trainingpartner Zita Notter by a splendid ippon. Since this year countries can compete with two competitors and Germany benefit optimal. None of the two had ever won a European medal and today they both won, but Weiss was clearly the strongest. She defeated Aleksandra Babintseva in the semi final and in total five opponents.

Aleksandra Babintseva of Russia won bronze after she was victorious over Galyna Monika Bank (POL). Babintseva defeated the strong Galyna Tarasova (UKR) in the quarter final.

The bronze was Tessie Savelkouls who confirmed her good performances at the European Cups winning both the events in Lyon and Leibnitz. In St. Petersburg she lost the final to Carolin Weiss. For bronze she was better than Galyna Tarasova who was the favourite to win gold today. Winning three European Cups is apparently not a guarantee to be in shape two months later. Tarasova finished fifth. Savelkouls received a warm applause of her coach, former World Champion Monique van der Lee. Her coach motivated her to proceed for bronze as Savelkouls led in her semi final by waza-ari against Notter but kept attacking and walked into an ippon by ther German. Disappointed overwhelmed Savelkouls but she could recover in time for her last fight.

Weiss won the 27th gold medal for Germany at European Junior Championships. The last heavyweight to win was Katrin Dittrich in 2002. Last year Karl Richard Frey won gold in the men’s U100kg category. On Saturday Max Muensterberg lost the final U81 but Germany did good business on the last day as Sven Heinle took bronze in the men’s heavyweight category.
Germany was the strongest country in this age category this season, but at the European Championships there’s a modest seventh place in the medal tally.