Germany strong at European Cup for Juniors in Berlin 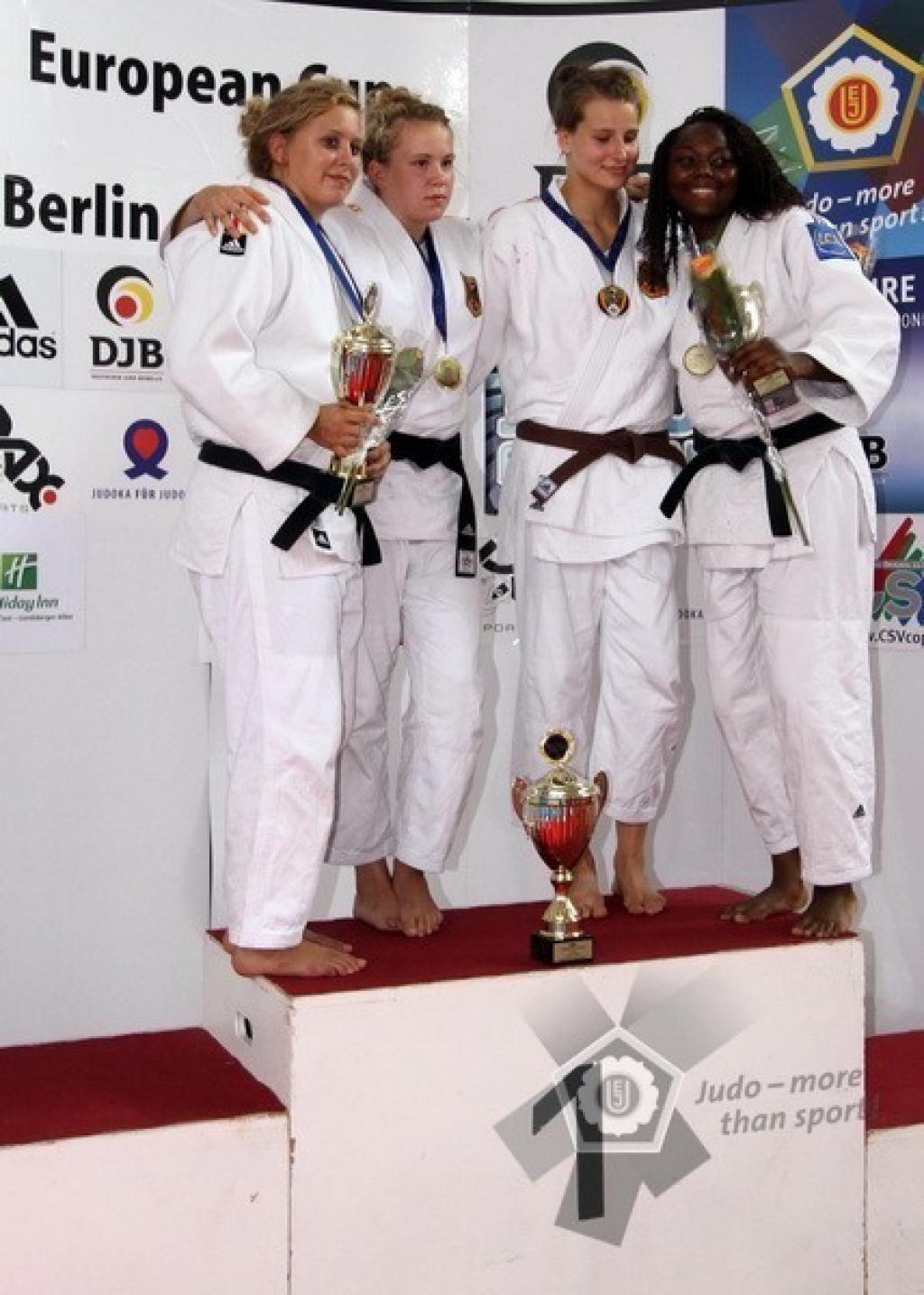 Germany had a very good second day of the European Cup for Juniors in Berlin. The German junior team added two gold medals to Saturday’s gold of Anthony Zingg. In the hall the temperature had risen to 36c but Maike Ziech and Carolin Weiss performed as expected and took the gold medal, just like last year. Heavyweight Weiss prolonged her title and kept the cup in Berlin. In the final she defeated Clarissa Taube in the final. Despite her lead Weiss added a waza-ari in the dying second of the match and convincingly retained the gold. Maike Ziech was the best of 15 participants U78kg and also she defeated a teammate. Lisa Schneider couldn’t resist the power of Ziech and was left with a good silver medal. Just like two weeks ago in Wroclaw Ziech won the gold medal and also she defended her title successfully. Anna-Maria Wagner won a bronze medal to confirm the German dominance. Ziech seems to be in form to defend her European title that she won in Porec (CRO) last year. Berlin is the last European Cup in a series of 14 events, the last test for the European Championships for Juniors in Sarajevo (BIH) in September.

French Margaux Pinot really dominated the women’s U70kg. She was by far too strong for all her opponents today with impressive offensive and positive judo. In a field of 25 women Caroline de Wit was her opponent in the final. Despite a bumpy road to the final she was the best of the rest and her silver medal was at least satisfying despite the colour. De Wit was accompanied by another two German’s on the bronze spot: Szaundra Diedrich and Lea Pueschel.

Another Dutch couldn’t win the gold U63kg, Do Velema who has a constant season slipped her mind for a moment and Magdalena Krssakova benefit perfectly and defeated Velema. The Dutch is the one with the most medals this season, winning gold in St. Petersburg, Lyon and Paks but left the European Cup tour how she started in March with silver. Krssakova had a great build up to Sunday’s gold. First she took a bronze in Kiev, silver in Paks in July and in Berlin she defeated five opponents for the sweet gold. In the semi final she defeated German Nadja Bazynski who won bronze after all. Margriet Bergstra won Holland’s third medal today and seems to be the Dutch second medal option for Sarajevo in this category.

In the men’s category Georgia had an excellent day but the first gold medal was for Russia. Aslan Lappaginov defeated his Georgian opponent Ushangi Margiani in the final. What a field in Berlin with 48 greedy good quality judoka in this strong category. Lappaginov continued his hunger for gold and won his third gold medal of the season with victories in St. Petersburg, Lyon and Berlin. The World’s number three of the Junior Championships in 2010 now wants to claim the European title in Sarajevo where last year’s attempt stranded with a seventh place. The 2010 European Cadet Champion Dmitry Zuev won bronze today after his loss to Margiani in the semi. Mammadali Mediyev (AZE) won bronze as well.

Georgia did win gold and silver in the category U90kg. Beka Gvinisashvili was the strongest among the 32 men. In the final he beat Lasha Taveluri. At the European Cup in Tessaloniki the final was the same, the results different. Daniel Herbst had a strong event winning bronze. Krisztian Toth was defeated by Taveluri, but won bronze and showed he is still one of the contender for a European medal.

Philip Alcaraz of Great Britain impressed in Berlin five consecutive ippons in his golden race. The Briton was better than Leon Strueber in the final. He seems to be in shape just in time. Last year he was the most successful judoka in the same category winning four events, but he build up a good season and has the form for the apotheosis in Sarajevo and perhaps Ljubljana where the World will be held. Two Georgians won a bronze medal. In the men’s heavyweight final, two Georgians were even in the final. Giorgi Zakariadze defeated Levani Matiashvili. To complete the podium for Georgia the bronze medal of Rostomi Khakhaleishvili was also welcome. Anton Krivobokov was the only Russian on the stage with bronze.