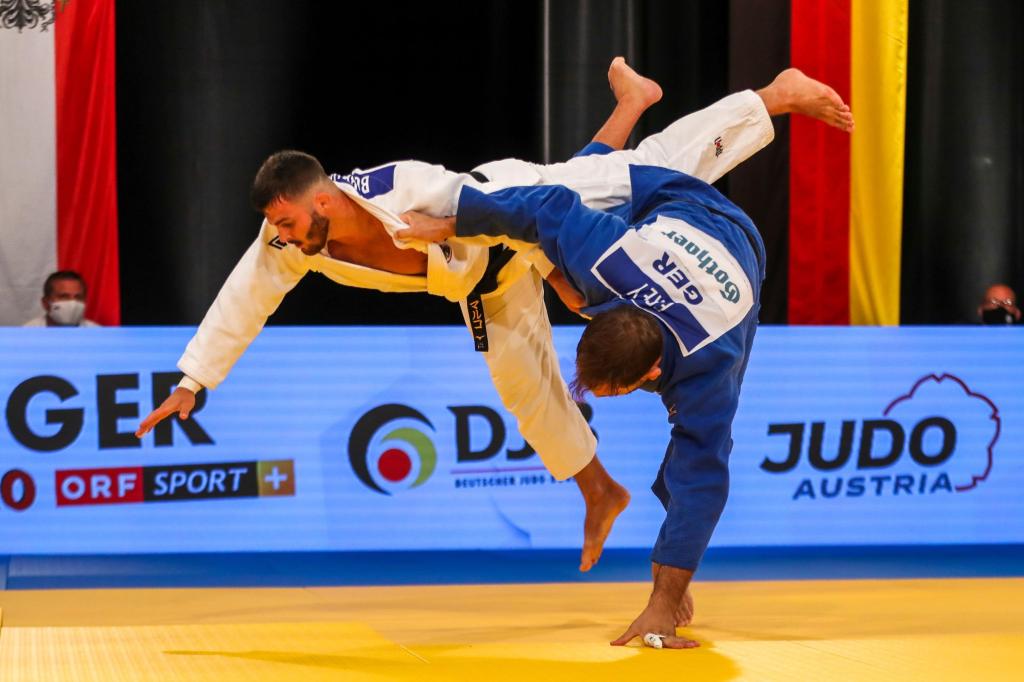 Yesterday evening, Team Austria and Team Germany went in to a head to head tournament. In the build up to the event, the stage was set, the bright tatami against a black back drop, national flags hanging behind the coaches chairs and the sole mat under spotlights. Austrian host, Andreas Onea began by interviewing the Austrian TV commentator and former Austrian international, Hilde Drexler followed by Judo Austria’s President, Martin Poiger and German Sports Director Ruben Göbel.

Göbel recognised the judo community, who were all looking forward to this prime time event and the athletes who were motivated to step back on the tatami.

To fight is very important and is the heart of our sport. It is a pleasure to be back on the tatami. Not only for the team, also for the judo family. Maybe this kind of competition can be a good example how competition can be organised in the corona pandemic. After five month of no competitions the athletes are eager to fight.

Poiger thanked the German team for their cooperation as well as the broadcasting company. Though the week started with unease for the Austrian side following positive testing for the coronavirus, Judo Austria followed IJF protocol, ensuring that the competitors still fighting all tested negative.

This competition should be a positive and motivational signal to the judo family: a competition is possible. We followed the IJF hygiene concept and I am very poud and thankful that the competition took place.

Shortly after the preliminary interviews, the anticipated contests began.

It was a hard and evenly fought contest, both competitors coming close to a win when working in ne waza, however the inability to keep control caused it to slip from their grip. Eventually it was a match decided upon penalties nearing four minutes in to golden score. GRAU putting the first win on the board for Germany.

Next up was Daniel LEUTGEB (AUT) and Moritz PLAFKY (GER). Again, a difficult contest for the pair with LEUTGEB initiating attacks and having more chances on the ground which led to PLAFKY picking up the three shidos and giving up the win to make it 1-1.

The first of the -57kg contests was between Theresa STOLL (GER) and Sabrina Filzmoser (AUT) and was off to an aggressive start. STOLL picked up a waza ari score early on, the result of her osoto makekomi, the landing for FILZMOSER looking painful at the knee. Ippon was awarded to the German for a second makikomi attack putting Germany back in the narrow lead.

My last competition was the home Grand Prix in Düsseldorf, 6 month ago. We trained a lot in the last time but Randori is not the same feeling when you have a competition. The pressure and the tension is different. It was good to be here and I understood how important it is to have competitions.

Once again evening the score, Team Austria fought back with a dominant Lukas REITER, dealing German competitor Alexander GABLER with a low ouchi gari attack for a waza ari score, then repeating the movement with a belt grip to secure an ippon, seemingly just too strong for his opponent to match.

In the fifth contest, Austria took the lead as Lisa GRABNER managed to throw Jana ZIEGLER twice, stepping round the back and controlling the sleeve as she threw backwards making it impossible for ZIEGLER to escape the score.

Christopher WAGNER (AUT) looked strong in this contest, his ashi waza bringing him close to a score, however the golden score took its toll and a weak uchi mata attempt was cleverly countered by Emil HENNEBACH, who pulled back the score to once again become even with their Austrian opponents.

Unfortunately for Magdalena KRSSAKOVA, she was unable to take the win for the home team as Germany’s Nadja BAZYNSKI did not hold back, even with an initial score for BAZYNSKI, KRSSAKOVA did not let up. Eventually it was a beautifully timed and seemingly effortless uchi mata from BAZYNSKI that gave her and Germany the win.

It seems that recent celebrations kept Johannes PACHER (AUT) on a high following his marriage within the past week, countering the Paris, Osaka and Abu Dhabi Grand Slam bronze medallist, Eduard TRIPPEL (GER), keeping Austria in the game.

Mina RICKEN (GER) was outmatched on experience in the -70kg category, facing WRL #5 Michaela POLLERES. Though she gave it her all, RICKEN attempted tani o toshi which inspired POLLERES, who got off the attack, only to mimic the movement herself to score ippon.

Karl-Richard FREY has an impressive list of accomplishments with a World silver and bronze to his name, making him the favourite for his contest against Marko BUBANJA who usually competes in the -90kg category. It was off to an even start and despite many attempts, FREY was unable to throw BUBANJA, but conditioning was in favour of FREY and three shidos were given to his Austrian opponent. This was the beginning of the end for Austria.

Once again it was experience that dictated this contest, Germany’s Luise MALZAHN having a total of 32 IJF tour medals, as well as a World bronze, a European silver and two bronzes. The 30 year-old came up against the young Austrian, Marlene HUNGER, the junior who has secured Junior Cup medals in Sarajevo in the past two years. A strong seoi nage from MALZAHN took the win.

The pressure was on European bronze medallist Stephan HEGYI (AUT) to even the score and make it a draw between the two teams and so took the fight to Johannes FREY, younger sibling of the -100kg representative. The 23 year-old FREY picked up a Dusseldorf Grand Slam silver at the beginning of the year and through this difficult contest, proved that his conditioning hadn’t suffered much during the pandemic, taking the win for both the contest and the tournament, securing Germany’s lead of 7-5.

German coach, Richard Trautmann was happy with the end result but sees there is definitely room for improvement,

I have seen today so-so performances of my athletes. Some were good but with some athletes we have to analyse the matches in detail. The Austrian athletes were well prepared and tactically well set.

It was exciting to see our European athletes back in a competitive setting, dusting off the cobwebs and looking forward to the return of IJF competition which has been announced by the IJF Executive Committee as the end of October 2020. The intention is to see Budapest as the first stop as we return to the tour, providing all health protocols can be adhered to.

Yesterday evening was an impressive and evenly matched show from both Team Austria and Team Germany. The organisation proved that competition can be successfully carried out under strict regulation, hopefully this will be a great example for further competition.