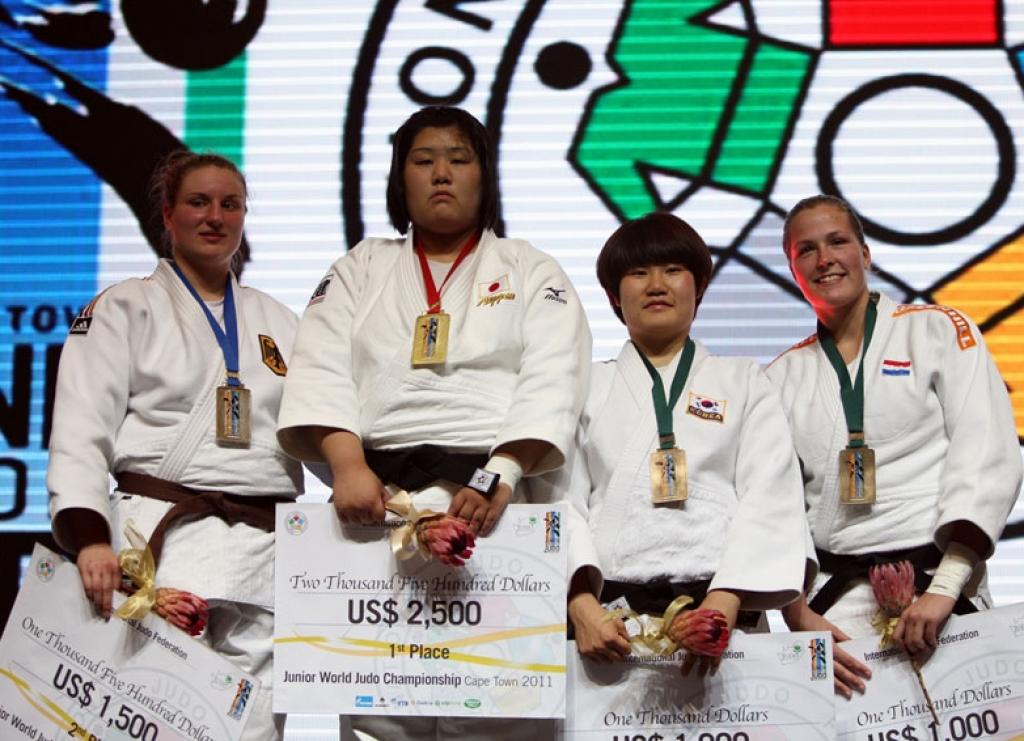 The World Junior Championships began with the national anthem of Japan. The last music to be played in Cape Town to conclude this year edition of the Junior World Judo Championship was… the national anthem of Japan. With the final victory of Takeshi Ojitani +100kg, Japan trusted most of the titles that were attributed in South Africa and the overall record since the championships started in 1974.
In the remake of last year’s final, Korean Gu-Ham CHO couldn’t change the history and was again beaten by Ojitani.
18-Year old Anton Krivobokov (RUS) who was the runner-up of the European Cadet Championships finished third as well as Sven Heinle of Germany, the runner-up of the Junior Europeans in Lommel.

A surprising winner from Cuba U100kg, Jose Armenteros. He the first Cuban male junior since 1998 when Yordanis Arencibia took the junior world title.
Armenteros was able to defeat the strong Italian European Champion Domenico di Guida by waza-ari. Armenteros was invited by the IJF to participate. His return flight ticket by mistake was booked two days ago. The IJF could change the schedule, and the Cuban talent could take part and win the world title.
The two bronze being attributed to Takumi Asanuma (JPN) and Alikhan
Dzarmotov (RUS).

In the women’s category two Japanese winners which resulted in the most successful Junior world championships ever for Japan with 12 world titles. Seven for the women, five for the men.
In an Asian final Mami Umeki (JPN) defeated Korean Yoon by immobilization.
Two European women finished with bronze. Dutch Guusje Steenhuis, runner-up at the European Junior Championships lost to Yoon but defeated Samanta Soares (BRA) for bronze. German Julia Tillmans lost to Steenhuis in the quarter final but was able to get back in the repechage and win her last two matches.

Another German, European Champion Carolin Weiss finished with Silver in the heavyweight category. But what a final! Weiss scored a waza-ari with a hip movement (tsuri-goshi). Close as she was to the gold at the last second Japanese Manami hot back and controlled Weiss with an immobilisation that gave to the defending world champion the final victory and her second Junior world title.
The third Dutch athlete who qualified into the final four of the competition, Tessie Savelkouls won bronze in Capetown.

Russia finished second behind Japan with two gold medals and four silver medals. The Netherlands and Germany both won four medals, one silver and three bronze medals, but Austria is ranked higher in the tally because of the fantastic gold medal by Bernadette Graf U70kg. Including Cuba, only four different countries won a gold medals.
Europe won 35 medals against 27 last year.