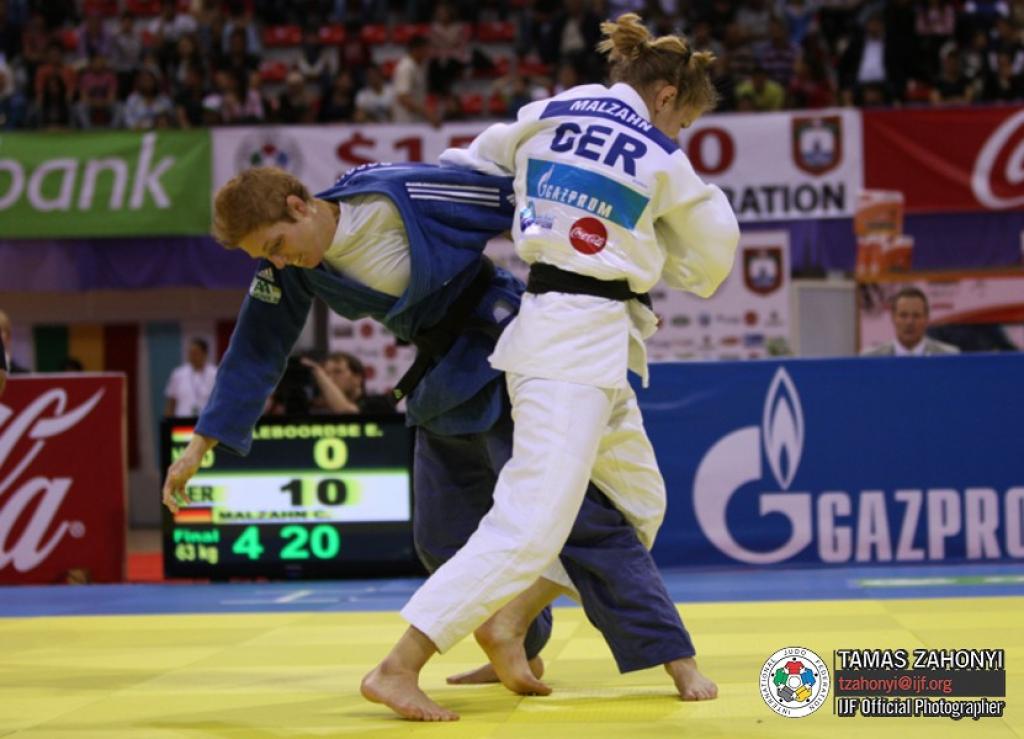 At the second day of the Grand prix of Tunis, Germany has done some good business. Germany’s male flagship Ole Bischof won the gold in the category U81kg defeating Leandro Guilheiro (BRA) in the final. Guilheiro won the Grand Slam of Paris this year and was one of the favourites to win the gold. For Bischof defended last year’s title successfully, actually it was his last win, but the bronze at the World Championships last year in Rotterdam was of course valuable as well. Since the German Open in Sindelfingen he hadn’t won an event, but didn’t participate in any international match since his world bronze.

Germany’s second gold medal today was for Claudia Malzahn. It was the first time she participated since she had won the previous IJF Grand Prix, the GP of Düsseldorf. In the final she defeated Dutch European Champion Elisabeth Willeboordse, and in the semi final Anicka van Emden (NED) for the second time this year after defeating her another time in Dusseldorf. Van Emden took the bronze today together with Urska Zolnir (SLO).

In the category U57kg French Automne Pavia was the surprising winner today. In the final the 21-year old 2009 French Champion defeated vice European Champion Sabrina Filzmoser from Austria, after she was disqualified in the first minute after grabbing the legs, an old habit. Filzmoser however was satisfied with her revenge for the European final, as she defeated European Champion Corina Caprioriu in the semi final today. Filzmoser didn’t have any chance on home soil, but today she was more active in her match against Caprioriu who took the bronze. Another German medal for Miryam Roper, making a total of four German medals today which gives them the lead in the medal tally.

In the men’s category U73kg Ukrainian Volodymyr Soroka took the title defeating Japanese Hiroyuki Akimoto in the final. The European Champion of 2009 won his fifth World Cup, Grand Prix or Grand Slam medal, and collected his second gold medal after winning the World Cup in Tbilisi last year as nice warm up for his later European title. Murat Kodzokov (RUS) was strong today winning bronze in this division, the 23-year old Russian won the World Cup of Tbilisi in the beginning of this year as successor of Soroka. Belgian Dirk van Tichelt won the second bronze. He’s always good at IJF events and prolonged his bronze status of last year in Tunis, but won the IJF events in Rio and Abu Dhabi that followed in 2009.

On Sunday the categories of U90, U100 and +100kg follow in the men’s category. Plus 100kg home athlete Anis Chedly will defend his title. In the women’s division the heaviest two categories will take place U78kg and +78kg.