GIUFFRIDA FINDS WAYS TO KEEP OFF ALL CHALLENGERS 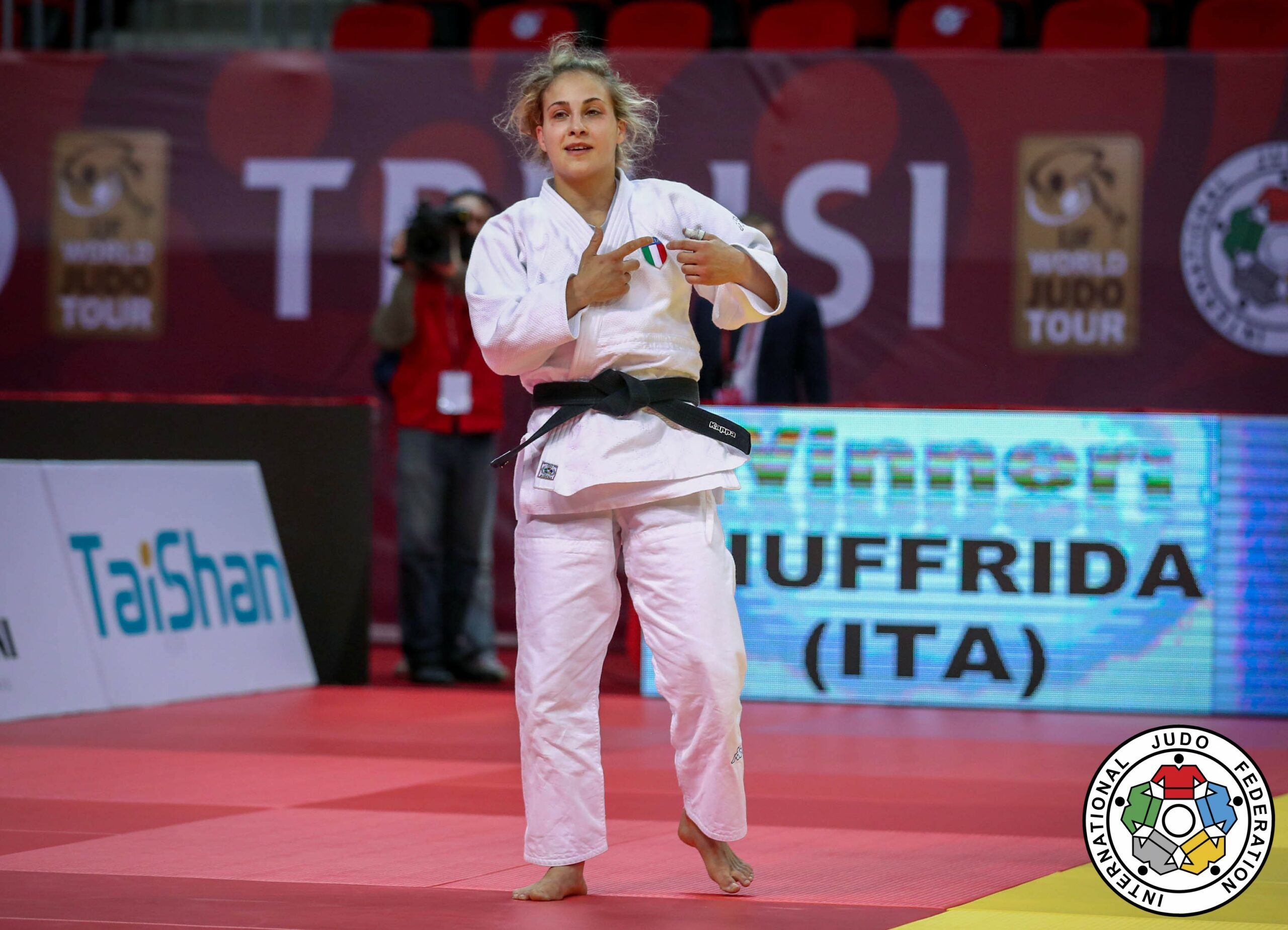 Not without the odd hiccup, number one seed in the -52kg category Odette GIUFFRIDA (ITA) nevertheless made her way to the final where she faced Chelsie GILES (GBR). The British athlete was hoping to maintain the momentum that took her to her first ever Grand Slam gold medal a little over a month ago in Tel Aviv. Appearing in her second Grand Slam final in as many months Giles, however, could not keep up with the tempo set by the experienced Giuffrida and, despite catching the Italian in newaza twice, Giles was unable to secure either osaekomi long enough to put a score on the board. Instead, Giles collected three shidos to give Giuffrida her third Grand Slam gold medal. In a tough battle Joana RAMOS (POR) collected a bronze medal after Larissa PIMENTA (BRA) collected three shidos in the first of the bronze medal contests. Tetiana LEVYTSKA-SHUKVANI (GEO) may consider herself slightly unlucky having earlier arm-locked Giuffrida and been awarded ippon only for the referee to be overruled when the Italian was adjudged not to have submitted. Then, in the second bronze medal contest the Georgian gave up two scores to Pupp REKA (HUN) the Hungarian taking the bronze medal.

in the -48kg category Francesca MILANI (ITA) collected her first ever World Tour medal but was unable to trouble the in-form number one seed MUNKHBAT Urantsetseg (MGL). In the final Munkhbat controlled the newaza exchanges and eventually held Milani with sangakugatame for ippon. There was disappointment for Milica NIKOLIC (SRB) and Andrea STOJADINOV (SRB) who both suffered first-round exits. But the battle of the Spaniards continued with number two seed Julia FIGUEROA (ESP) eventually throwing number four seed Laura MARTINEZ (ESP) after nearly three minutes of golden score with o uchi gari for ippon in the first of the bronze medal contests. After losing to Munkhbat in the semi-final Marusa STANGAR (SLO) bounced back in the second of the bronze medal contests to defeat Catarina COSTA (POR) whom she held with sangakugatame for ippon.

In the -60kg category number one seed Sharafuddin LUTFILLAEV (UZB) suffered another disappointing early exit after losing in Tashkent earlier this month, this time to 21-year old newcomer Shahboz SAIDABUROVOV (TJK). The Tajik, in only his second Grand Slam, went on to win a bronze medal when he defeated Tornike TSJAKADOEA (NED). In the final Temur NOZADZE (GEO) was fortunate to avoid serious injury when Kemran NURILLAEV (UZB) attempted a technique that went against the Georgian’s elbow for which Nurillaev was given hansokumake, gifting the gold medal to a grateful Nozadze. Konstantin SEMONIDIS (RUS)  was unable due to an earlier injury to compete in the second of the bronze medal contests leaving Karamat HUSEYNOV (AZE) to pick up his first ever World Tour medal.

Vazha MARGVELASHVILI (GEO) started as hot favourite in the -66kg category. But in the final Sardor NURILLAEV (UZB) stunned the Georgian (and all those in the venue) when after only 20 seconds he threw the number ones seed with uchi mata for ippon and the gold medal. In the first of the bronze medal contests Bagrati NINIASHVILI (GEO) lost out to number two seed GANBOLD Kherlen (MGL). The battle for the top spot in this category for Russia continues with Mikhail PULIAEV (RUS) picking up a bronze medal when Denis VIERU (MDA), who was expected to be among the medals, was unable to compete due to an injury.

Eteri LIPARTELIANI (GEO) caused the upset of the day when in the semi-final of the -57kg category the Georgian came back from a waza ari down to throw the current world champion Crista DEGUCHI (CAN) for ippon. The heroics came to an end in the final however, where Nora GJAKOVA (KOS) had the beating of the valiant Georgian and a single waza ari scored by Gjakova was enough for the Kosovar to take the gold medal. Daria MEZHETSKAIA (RUS) showed her power and skill when in the first bronze medal contest she threw Kaja KAJZER (SLO) with a right o soto gari left nidan ko soto gake combination for ippon. Deguchi came back in the second of the bronze medal contests to defeat Marica PERISIC (SRB).